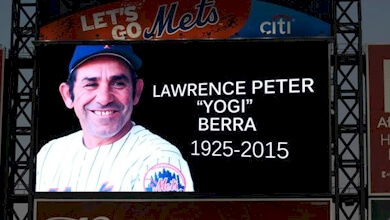 Kelly Tripucka spent a lot of time in a car with Yogi Berra.

Sounds like an odd couple, right? Maybe to an outsider, but for the two longtime friends they had a special bond.

Last week Berra died at the age of 90, severing a link to a golden era of baseball. Tripucka, like the countless number of people who admired the Yankee legend, is saddened by the loss. But the 56-year old Tripucka, who was a two-time All-Star forward for the Detroit Pistons in the 1980s, has lots of great memories of the Hall of Fame catcher.

The Berra and Tripucka roots run deep. Kelly’s father Frank was a star quarterback in the NFL in the 1950s and he also helped raise a family of athletic boys from his home in Bloomfield, New Jersey. A few miles away in Montclair, New Jersey, Berra and his wife Carmen raised their family, also with three sports-minded boys of their own. The Berra kids and the Tripucka kids were high school rivals. Kelly’s older brother Mark went to college with Yogi’s son Larry. The two professional athletes — Frank and Yogi — were friends, and their friendship drew closer after they retired from the gridiron and the diamond and were attending high school competitions and football games in New Jersey.

Kelly and his brothers spent some holidays and birthday celebrations at Berra’s home. Yogi was in their living room, this larger than life Hall of Fame legend who was also a small, quiet man. After high school, Kelly followed his Dad and enrolled at Notre Dame where he was an All-American in basketball. The Pistons drafted him with the 12th overall pick in the 1981 NBA Draft. A deadly accurate shooter with bulging biceps and flowing curly hair, Tripucka was a fan favorite in Motown and in his rookie season he was an All-Star. The following year he averaged 26.5 points as he teamed with Isiah Thomas to give Detroit two exciting young players. But after five seasons in Detroit he was traded and became an NBA nomad.

But the younger Tripucka always kept in touch with Berra, who maintained his home in New Jersey. As Yogi started to get older, Kelly assumed his father’s role as Berra’s chauffeur. If Yogi needed to go anywhere it was either Frank or Kelly who did the driving. When Frank passed away in 2013, the duties passed solely to Kelly. The two, separated in age by more than 30 years, spent a lot of time together. Tripucka would take Berra to the many golf tournaments and other charity events that Berra was invited to. Though Yogi was not much of a talker, Kelly enjoyed every minute he had with the Yankee icon.

“I grew up idolizing Mickey Mantle,” Tripucka told Jeremy Schaap on his show The Sporting Life which airs on ESPN Radio. “Being around Yogi was great because he was a connection to Mantle.”

Asked what it was like to be around Yogi, Tripucka spoke about Berra as a man, not as a superstar.

“He treated everyone the same. He didn’t care who you were, if he was talking to you, then you were the most important person to him at that time.”

During the years Tripucka spent most of his time with Berra, Yogi didn’t look the part of a three-time MVP winner and one of the greatest catchers to ever play the game. Which, Tripucka believes, is the reason Yogi was so beloved.

“He was the common man,” Tripucka told Schaap, “he was a reminder that you didn’t have to be 6’2, 220 pounds to be an athlete. People looked at Yogi and knew anything was possible. He’s going to be missed and there will never be another Yogi.”