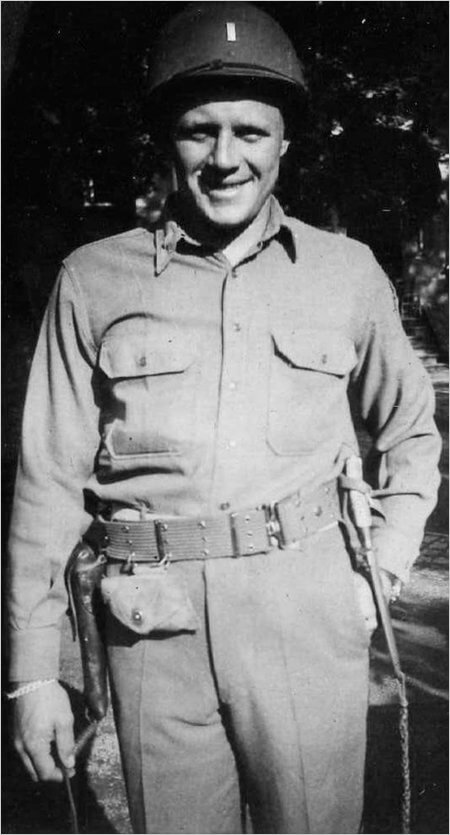 Ralph Houk occupied a baseball dugout for twenty years as a baseball manager, but he avoided the fate of most in his profession: he was never fired.

That’s fitting because Houk was a survivor. He once said of his career before baseball: “All you had to do to get promoted in my outfit was stay alive.”

Tigers fans remember Houk as the veteran skipper who presided over the painful transition from the old guard team that won the World Series in 1968 and a division title four years later, to a rascally pimple-faced club of youngsters ready to compete again at the corner of Michigan and Trumbull. In his five seasons in the Motor City, Houk observed downs and ups and downs again: from the flushing out of former stars like Norm Cash, Mickey Lolich, and Mickey Lolich; to the retirement of venerable Al Kaline; to 102 losses and an embarrassing 19-game losing skid; to the zany Summer of The Bird (Mark Fidrych); to the arrival of Sweet Lou and Trammell. They also might recall his epic dirt-kicking, hat-twisting arguments with the men in blue. No one could verbally tear down an umpire quite like Houk.

Houk’s credentials as a big leaguer were impressive: pennants in each of his first three seasons as manager of the Yankees and a solid second stint as manager of the same team. His playing career had been unremarkable, spending eight seasons as caddy to Yogi Berra, hardly seeing action. He appeared in just 91 games in the major leagues. But that’s really not what this article is about. We’re here to recount the heroic first act of Houk’s life, when he earned battle stars and battle scars.

Ralph Houk was born on a farm in Lawrence, Kansas, the fourth of five children born to his parents. The milk and eggs must have been good on the Houk farm, because Ralph grew into a strong, solid teenage athlete. He starred in baseball and football, but loved playing baseball the most because he got to be behind the plate where he could see all the action. He was signed by the Yankees and started his way through their farm system when life was interrupted by the Japanese attack on Pearl Harbor. Ralph and one of his older brothers enlisted in the U.S. Army on the same day in February of 1942, and both were sent to Fort Leavenworth.

It’s not an exaggeration to say that Houk learned most of what he needed to later be a manager while he was in the Army. A natural leader, Ralph was named platoon leader and entered into officer candidate training. After completion of officer school and training in tank warfare, Houk was shipped to France three weeks after D-Day in 1944 with the 89th Cavalry Reconnaissance Squadron of the Ninth Armored Division. He landed on Omaha Beach, where fighting was still dangerous, and on that first day he had his first scare. A bullet from a German machine gun pierced Houk’s helmet, barely missing his skull.

Pushing into Europe, Lt. Houk found himself in Luxembourg that winter in the Battle of the Bulge. The Germans were backed against the wall and pulling out all the stops, and Houk saw the other two platoon leaders fall dead during an intense battle in a town called Waldbillig, leaving him alone in charge of more than 60 soldiers. The date was December 21, 1944, and what happened that day later earned Houk a Silver Star for bravery. The following description was included in that citation:

“Deliberately exposing himself to the withering fire, although the fire was so intense that his clothes were torn by enemy machine-gun bullets, he calmly moved from one position to another, directing his men. As enemy tanks continued to advance, realizing that his guns were ineffective against them, he secured a tank destroyer from an adjacent unit, and personally directing its fire, he forced the enemy to withdraw from the area. Through his gallant leadership, he was directly responsible for repelling the enemy attack.”

Houk also received a Bronze Star with Oak Leaf Cluster and was promoted to the rank of Major. He was instrumental in helping implement plans in the Battle of Belgium. One day a commanding officer handed Houk a sealed envelope and ordered him to take three men and “get these maps to Bastogne.” He was told that if he was captured he should destroy them, swallow them, whatever he had to do. Houk got the maps to Bastogne and returned safely.

Later, early in 1945, Houk was injured when shrapnel entered his left leg after a German artillery shell fell close to his jeep. He was awarded the Purple Heart, but replied, “What the hell is this for? I only got a little scratched up.”

When the war ended, Houk returned to the Yankees’ farm system and made it to the big leagues in 1947. By that time, his war heroics were whispered about in baseball clubhouses and the nickname “Major” was tagged on him. But Houk rarely talked about his war years. Later, when he managed the Yankees and one of his players complained about the Vietnam War, Houk stopped him short and made sure the young man wasn’t too sharp with his criticism. “The men on the front lines are worthy of praise even if the war isn’t,” Houk scolded. 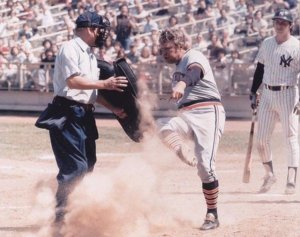 During his tenure with the Tigers, manager Ralph Houk lets an umpire know what he thinks.

In 1961, when Casey Stengel was politely asked to leave by the Yankees, Houk was hired to manage the team. He stepped right in and guided the Yanks to three straight pennants, including two championships. He found that the skills he’d learned in WWII as an officer helped him manage the variety of personalities that occupy a major league clubhouse. The Yankees hired him twice, and the Tigers trusted him to shepherd their team through a transition period. A few years later, the team won a championship with many of the players Houk guided into the major leagues. Shortly after retiring from Detroit, Houk felt the itch to lead young men again, and he accepted a job with the Boston Red Sox. He put in four more years, and even though he was past his 60th birthday, he was praised as a player’s manager. “The Major” helped a new batch of young players acclimate themselves to the big leagues. When he left the Sox, he had them well-positioned to compete, and two years later that core of players won the pennant.

Ralph Houk just happened to be a baseball manager, that’s how he became famous. But it was the leadership (and bravery) he displayed in the Second World War that allowed him to become one of the game’s best managers.