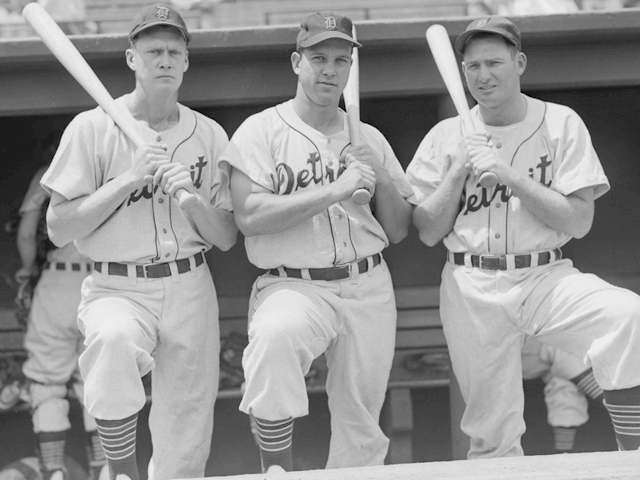 From left to right: Hoot Evers, Vic Wertz, and George Kell were the heart of the Detroit Tigers’ batting order in 1949.

In the years before the farm system was cemented in place as we know it today, teams often feverishly pursued college athletes, whether they had played much baseball or not. Such was the case with Hoot Evers, a multi-sport star at the University of Illinois whom the Detroit Tigers signed off the campus in 1941.

After being sidetracked by global events, Evers, who was originally a standout track star and basketball player, forged a 12-year career in the major leagues, enjoying his best seasons as a flychaser with the Bengals. In his prime in Detroit, fans at Briggs Stadium loved to serenade him with loud cheers of “HOOT!” After he hung up his spikes, Evers stayed in the game as a leading man in scouting and player development. He was still drawing a baseball paycheck when he passed away 25 years ago in Houston.

Walter Arthur Evers (pronounced EE-VERZ) was born 95 years ago on February 8, 1921, in the baseball hotbed of St. Louis, Missouri, though he grew up across the state line in Illinois. Cowboy movie star and rodeo champion Hoot Gibson, popular in the 1920s, was the source of Evers’ nickname — young Walter was a huge fan. From an early age his friends and family tagged him as “Hoot.”

By the time he was in his late teens, Evers was stronger, taller, and faster than just about any other young athlete in his area. He starred on the basketball court, gridiron, baseball diamond, track, and even the tennis court. He decided to accept an athletic scholarship at Illinois in 1940 where he hoped to emulate one of his heroes, Lou Boudreau, who had starred for the Illini as a collegiate basketball and baseball player. Evers spurned offers from other big league teams and after only one year signed with the Tigers off the campus for a $9,000 bonus. Detroit scouting director Wish Egan was a personal friend of Illinois baseball coach Wally Roettger, which helped him secure the services of the young ballplayer. It was a big year for Egan: at the same time he secured Evers, Wish was scouting (and signing) prized college star Dick Wakefield at the University of Michigan.

At the tail end of the 1941 season Evers was called up by the Tigers where he appeared in one game, on September 16. It was a sobering experience for the 20-year old: he struck out twice, went o-for-4, and grounded into a double play in a Detroit win at Griffith Stadium in Washington D.C.

After Pearl Harbor catapulted the United States into World War II in December, Evers joined millions of other American boys and entered the military. He spent three and a half years in the Army Air Corps, though he never saw combat. When he returned in the mid-summer of 1946, he was 25 years old, world-wiser, and more physically mature. In his prime, Evers was a tall (6’2) lean-muscled, long-limbed outfielder. Evers had light-brown hair and striking blue eyes.

Evers never spent a day in the minors after his military service in World War II. He had received a lot of instruction from Birdie Tebbetts, the Detroit catcher who served as player/manager of the Army Air Corps team in Waco, Texas. In the second half of the 1946 campaign, Detroit skipper Steve O’Neill used Evers in center field, where Hoot batted .266 with 42 runs scored, 33 RBIs, and seven stolen bases in 81 games.

Early in his career, Evers overcame a series of injuries, including a broken jaw, fractured ankle, and broken thumb. Throughout his career, Evers played the game with a style that bordered on recklessness, which unfortunately led to some injuries. In 1946 he broke his jaw when he had a terrifying collision with third baseman Eddie Mayo while chasing a fly ball. Evers ended up unconscious on the field and when he returned a few weeks later he played with his jaw wired shut.

In both 1948 and 1950, Evers represented the Tigers in the All-Star Game, driving in 103 runs each season. The latter season was his best, as he hit .323, cored 100 runs, had 35 doubles, a league-leading 11 triples, and 21 home runs. That year he finished 11th in American League Most Valuable Player voting. That was also the year when the Tigers made a spirited run for the pennant but fell short late in the season when they lost a game in bizarre fashion due to a forest fire in Canada.

The ’50 season was when Evers set an AL record with a .997 fielding percentage in the outfield, committing only one error in 341 chances. Very quick and gifted at tracking down fly balls, Evers ranked among the best defenders in the outer pasture. Unfortunately for Evers, Rawlings didn’t introduce their Gold Glove Awards until 1957, the year after Hoot retired, otherwise he probably would have captured a few.

Evers had a disappointing season in 1951 that was marred by more injuries. He looked to rebound in ’52 but just days before the season was to start his thumb was broken again when he was hit by a pitch in an exhibition game. Hoot missed two months but when he returned the Tigers traded him to the Boston Red Sox in a blockbuster deal. Detroit sent Evers, third baseman George Kell, starting pitcher Dizzy Trout, and infielder Johnny Lipon to the Red Sox for slugging first baseman Walt Dropo, third baseman Fred Hatfield, veteran shortstop Johnny Pesky, and two others. The deal shook up both clubhouses. The Tigers needed a big bat to fill the void left by the absence of Hank Greenberg, and Boston was looking for an outfielder to fill in for the loss of Ted Williams, who was flying planes for the Marines in Korea.

It was thought that the right-handed hitting Evers would increase his power numbers in Fenway Park, but his 25 homers in two full seasons in Beantown were not impressive, at least to Boston brass, who placed him on waivers a month into the 1954 season. Thus would begin the chaotic final stage of his playing career, as Evers played for five teams over his last three years in the major leagues, but he never again played regularly nor very effectively. he retired in October of 1956 with a career .278 batting average, 98 homers, and a 778 OPS next to his name. He had proved to be a fine contact hitter during his career, striking out just five more times than he walked (420-415). During his career, Evers had suffered at least three concussions, and probably a few more that went misdiagnosed.

Former Detroit teammate Hank Greenberg, now serving general manager of the Indians, wanted Hoot to stay in baseball, so he hired him as a scout, a position Evers held for two years. In 1959 when Greenberg was replaced by Frank Lane, Evers was elevated to assistant farm director. He held that job for Cleveland for more than a decade, before returning to the field for one season as a coach for the Tribe in 1970 under manager Alvin Dark. The following year the Tigers reunited with Evers, hiring him as their director of player development. In that role during the 1970s, Evers helped mentor young Bill Lajoie, a scout who eventually went on to great success with the organization. Under Evers, the Detroit farm system was well-stocked and produced several fine young players in the 1970s, including Ron LeFlore, Mark Fidrych, Jason Thompson, Steve Kemp, Lance Parrish, Jack Morris, Alan Trammell, and Lou Whitaker. In 1978 the 57-year old Evers took a job as a special assignment  scout with Houston, and he stayed with the Atros in some capacity for the remainder of his life. He died after an illness on January 25, 1991.

Jim Leyland, who played, coached, and managed in the Tiger organization during Evers’ time as the head of player development, had high praise for the former outfielder. “Hoot Evers was probably the number-one motivational guy for me,” Leyland told Dan Zachofsky in October Baseball in 2005. “He was a farm director for the Detroit Tigers. Hoot Evers, Bill Lajoie and Ed Katalinas advised me to begin a career in the minor league system. … If I had to look back and pick one person that really motivated me and really let me know what it’s about, it would be Hoot Evers.”