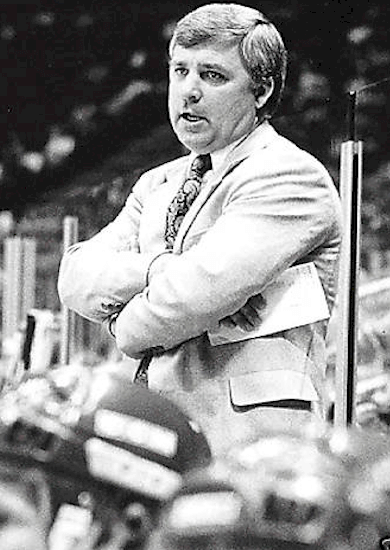 Earlier this year Bryan Murray was inducted into the Ottawa Sports Hall of Fame. He’s one of only ten coaches in National Hockey League history to win 600 games. He’s been in the game as a coach or front office administrator for more than four decades. But the former Red Wing coach and general manager is still seeking hockey’s greatest price – the Stanley Cup.

Murray currently serves as general manager of the Ottawa Senators, a post he has held for eight years. He also stood behind their bench for three years and led the Senators to the Stanley Cup Finals in 2007 where they were vanquished by Anaheim, a team he formerly coached. In all, Murray has been head coach or GM for parts of 17 seasons but the 2006-07 season with Ottawa is the only one in which he has advanced past the second round.

Years ago when he was a still-young hot commodity, Murray was pursued heavily after the Washington Capitals fired him midway through the 1989-90 season and replaced him with…his brother Terry. Bryan had led the Caps to the playoffs in each of his seven full seasons on the bench, the first playoff appearances ever for the franchise. But that wasn’t enough, as Murray’s teams never went any further than the second round. In his third season with Washington he was given the Jack Adams Award as the best coach in the NHL. Yet, the Capitals thought they’d be better off with his brother than him.

Quickly after the 1989-90 season was concluded, the Red Wings snatched Murray up and named him their head coach and general manager. Owner Mike Ilitch gave him complete control over player decisions for his hockey team, a young crew led by 25-year old captain Stev Yzerman. The Wings improved by six wins and made the playoffs where they pushed the St. Louis Blues to seven games before losing in the opening round. The next season Yzerman scored 103 points and Sergei Fedorov anchored the second line scoring 86 points and the Wings advanced to the second round of the playoffs. But when the team lost in the first round after posting 103 points in 1992-93 season, Murray was removed as head coach. Whispers were that he was a coach who wouldn’t win the playoffs.

The wings replaced Murray with a living legend — Scotty Bowman — but they kept him as GM for the 1993-94 season. But the front office wasn’t big enough for both Bowman and Murray and after one year working together, Murray was shown the door. The Wings were in the Finals the next season and later won three Stanley Cups in a six-year stretch under Bowman with one of the greatest teams in hockey history. While Bowman brought that team to the promised land, Murray had a small part in laying the groundwork for that stretch of glory. But he didn’t share in the triumph.

By the time the Wings were the best team in hockey in the late 1990s, Murray was in a strange place for a hockey lifer — Miami. As the head man for the Florida Panthers, Murray built a team that went to the Stanley Cup Finals in 1996 only to lose. It was quite an accomplishment, and he later brought himself downstairs to coach the team for part of a season. But he left in 2001 to coach the Mighty Ducks in another city with very little hockey history. Once again his touch was golden and he sparked the franchise to the Cup finals as GM, but they lost to the Devils in a heartbreaking series.

A Quebec native, Murray jumped at the chance to lead a Canadian team and took the head job with Ottawa in 2004. On February 20, 2007, Murray won his 600th game, becoming the sixth player at that time to reach the plateau. He was also only the second coach to get to 600 wins without having won at least one Cup title. He coached the Senators to the Finals in 2007 where in an irony, he lost to one of his former teams, the Ducks. He later went back up to the front office, ceding coaching duties to younger men. The 2015-16 seasons is the 72-year old’s 47th in pro hockey and he’s now been a coach or GM in the NHL for nearly two decades.

But Murray is still waiting to see his team win a Stanley Cup title. The former Detroit coach saw his Senators garner 99 points last season before losing to Montreal in the opening round, something that’s happened far too often in his long and successful career. A career lacking just one thing – a championship.