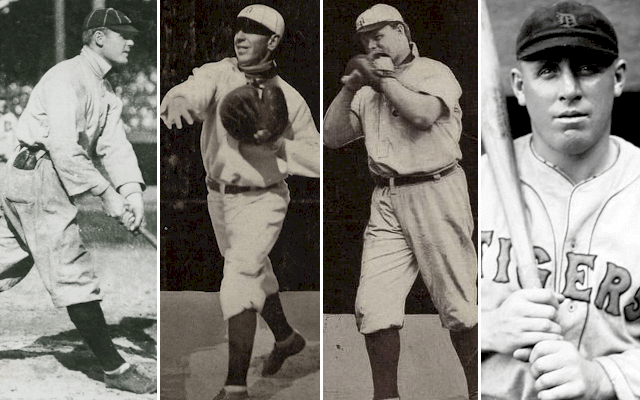 After Ty Cobb ended his playing days with the Philadelphia Athletics in 1928, a popular anecdote followed him into retirement. According to this story, manager Connie Mack one day tried to insert a pinch hitter for the Georgia Peach, then in the twilight of his storied 24-year career.

Mack may have been the Grand Old Man of Baseball, but the balding 41-year-old outfielder with the .367 lifetime batting average wasn’t haven’t any of that nonsense. “No one,” he told Mack, “ever pinch hits for Cobb.” He then sauntered to the plate and banged out a base hit.

Nice story, but not true. As a matter of fact, the greatest hitter in baseball history was batted for on no less than four occasions during his career.

However, during Cobb’s first full season in Detroit, he was still enough of an unproven batter that manager Bill Armour occasionally sent someone up to bat for him. Although Cobb undoubtedly disagreed with the strategy, he could hardly argue with the results. Ty was pinch-hit for three times in 1906, and each time the substitute batter delivered a base hit.

The first of these occasions was April 24, 1906, at St. Louis. In the ninth inning, Armour sent Sam Crawford to the plate to swing for Cobb against Barney Peltry. Wahoo Sam responded with a single, but the Browns won anyway, 2-0.

A few weeks later, on May 30, catcher Fred Payne batted for Cobb in the eighth inning of a game against Chicago at Bennett Park. Payne, a career .215 hitter, singled. It was for naught, as the White Sox won, 4-1.

When a pitcher pinch-hit for Ty Cobb

Later that season, in a September 18 home game against Boston, George Mullin took Cobb’s spot in the batter’s box. Entering the game, Cobb was fourth in the league in batting with a .323 mark, but he’d had a bad couple days. The previous afternoon, he had gone 0-4 against Chicago’s Nick Altrock. On this day, he had already struck out twice against Jesse Tannehill, each time on a slow curve. “On two days left-handers put a dent in Cobb’s batting average,” the Detroit Free Press reported. Mullin—a fine-hitting pitcher who often was called on to pinch-hit during his career—tripled to center, but the Tiger still lost.

Manager Ty Cobb sent a pinch-hitter in for himself

The following year, Cobb won his first batting championship. He’d win a dozen overall, his last in 1919. Unsurprisingly, it was another 16 seasons before Cobb gave way to a pinch-hitter. By then he was also managing the Tigers.

On May 5, 1922, Bob Fothergill—a heavy-hitting outfielder who was having a difficult time breaking into the Tigers’ loaded lineup—became the fourth and final man to come off the bench to bat for Cobb. The Tigers were playing the St. Louis Browns at Navin Field when “Manager Cobb benched himself for a pinch hitter in the ninth, sending in Fothergill, who flied out to Ken Williams in left field,” reported the Free Press. The Browns won, 5-1.

Curiously, years later Fothergill would retire holding the major-league record for most pinch hits. His other distinction is being the only man ever to swing for Cobb who didn’t deliver a base hit in the great man’s place.