Frank Tanana explains how being traded to Detroit saved his career 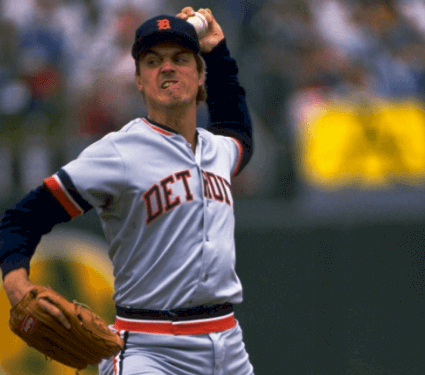 When Frank Tanana came to the Detroit Tigers in a mid-season trade in 1985 he was at a crossroads in his career. But he established himself as a crafty southpaw and ended up pitching more games for the Tigers than for any other team. He won 96 games in a Detroit uniform.

Frank Tanana was one of the few true fireballing left-handed pitchers in baseball history.

He was a young strikeout artist with the California Angels before an arm injury changed everything.

Tanana bounced around from California to Boston to Texas, taking years to figure out if he could learn how to out-pitch his opponents rather than blow fastballs by them.

Just as he had finally pulled it together, the lefty got some news that would change the course of his career. In 1985, he was headed to the defending world champion Detroit Tigers.

“It was kind of a career saver, getting traded from the Rangers to the Tigers,” Tanana said at Fifth Third Ballpark as part of the West Michigan Whitecaps’ Tiger Fridays. “They had won the World Series in 1984 and to get traded to Detroit, coming off a good year, really was a big career boost because they were a great team. It was huge (returning home) to be able to put on a Tiger uniform.”

Tanana was one of the most successful pitchers in baseball history to go through an arm injury and reinvent himself.

“I hurt my arm in the late ’70s and decided to change my style of pitching,” Tanana said. “I had a little trouble figuring out how to change speeds and pitch that way. Things turned around. It was touch and go for a while.”

Tanana would pitch with the Tigers for eight seasons, winning 96 games, including two of the best memories of his career, which he talked about at Fifth Third Ballpark. He pitched a 2-0 shutout in his first game in Detroit in 1985, then was on the mound at Tiger Stadium on the final day of the season in 1987, pitching a six-hit shutout with nine strikeouts against the Toronto Blue Jays to clinch the division title for the Tigers, outdueling Jimmy Key 1-0.

“That is the primo moment for me. I never pitched in the World Series, but that is about as close to the atmosphere as I could get,” he said. “Last game, sellout crowd at Tiger Stadium, on national TV, pitching against my favorite team to pitch against. I really had their number. I pitched a lot of games, but that is my highlight game.”

For the Tigers, he went 15-10 in 1987, helping the Tigers to the division title, with the biggest win of his career on the final day of the season.

And that was all after learning to be a crafty left-hander rather than a fireballer.

“The biggest challenge was mentally. Sometimes you get in a jam and think you can just fire this 98 mile an hour fastball by this guy, because when I was younger, I could practically tell them what was coming and they couldn’t hit it. But after the change, it was pitching to spots and believing. You gotta have a lot of belief in your stuff.”