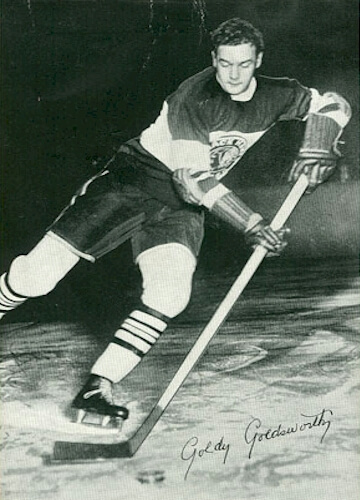 Goldy Goldsworthy is seen here during his stint with the Chicago Blackhawks.

His name is a mere footnote in Red Wings history. But as the first U.S.-born player to suit up for Detroit’s National Hockey League franchise, Leroy Goldsworthy is worth remembering today.

Ever since the team’s inception as the Cougars in 1926, its roster had been littered with men of Canadian birth, mostly from Ontario. The Detroit hockey team has employed players born in every corner of the northern regions of North America. But in the 1930-31 season, when it was known as the Falcons, Detroit finally featured a player who hailed from south of the border (or should we say north of the border, given the city’s quirky geography?).

Goldsworthy was born on October 18, 1906, in Two Harbors, Minnesota, a tiny town on the shores of Lake Superior, about 20 miles north of Duluth. Two Harbors was home to the Minnesota Iron Company, as well as the local legend of John Beargrease, an Ojibway mail carrier who survived a bear attack. Life there was slow-paced, with not much for the local kids to do in the long, harsh winters except play hockey.

It was there that Goldsworthy first sharpened his skates. But he was also a pretty fair baseball player. Good enough, in fact, to turn pro.

Goldsworthy’s career as a right wing hockey player began with the minor-league Edmonton Victorias. After success with the Edmonton Eskimos and Springfield Indians, he got his big break when he was called up to the New York Rangers for the 1929-30 season.

He played only one year in the Big Apple, seeing action in all 44 games, with four goals and one assist. He was traded to the London Tecumsehs of the International Hockey League just before the start of the 1930-31 season. In January of 1931, Goldsworthy found himself back in the NHL when he was dealt to the Detroit Falcons, who at the time were coached by Jack Adams.

The Falcons played at Olympia Stadium, the red brick barn on Grand River which had opened only a few short years before. Goldsworthy played in 12 games for Detroit in the 1930-31 season, scoring one goal. It wasn’t a good season for the Falcons, who finished 16-21-7, good for fourth place in the American Division. Only the Philadelphia Quakers and Ottawa Senators finished with fewer points.

It was back to the IHL the following season, this time with the Detroit Olympics, which shared Olympia Stadium with the Falcons. But Goldsworthy returned to the NHL for the 1932-33 campaign, with Detroit once again. By this time Adams had officially changed his team’s name to the Red Wings, and unveiled the new “winged wheel” logo that became an instant icon.

Goldsworthy saw a fair share of action on the ice. In 25 games, he scored three goals, with six assists. The 1932-33 Wings were a solid team, tying with the Boston Bruins for the most points in the NHL, with 58. Detroit beat the Montreal Maroons in the Quarter-Finals, but lost to the New York Rangers in the Semis. Goldsworthy was joined that season by rookie-of-the-year Carl Voss, the Wings’ second U.S.-born player.

It proved to be Goldsworthy’s final season in a Detroit uniform. He moved over to the Blackhawks, where he emerged as an important checker on the team that won the Stanley Cup in 1934. He was later traded to the Montreal Canadiens in a huge deal that also involved future Hall of Famers Lionel Conacher and Howie Morenz. In his later years, Goldsworthy was a valuable defensive player for the Boston Bruins and New York Americans. When his NHL career ended, he skated several more seasons in the minors before hanging it up at age 39.

Goldsworthy played a role in one of the most mysterious sports stories of 1934. In August, a body was pulled from Canada’s Assiniboine River. No wallet or identification was on the body, but it was believed to be that of the Blackhawks’ Jack Leswick, a 24-year-old rookie who had been reported missing.

Goldsworthy and Rosario Couture, his teammates on the Hawks, were given the unenviable task of making a positive identification on the body. Leswick’s gold Blackshawks wristwatch, which he always wore, was nowhere to be found, but it was indeed him. Robbery was dismissed as a cause of death and officials attributed it to suicide, which many of Leswick’s family and friends argued was not in keeping with his character.

During his prime, Goldsworthy was also a two-sport athlete. As a pitcher, he played in the minors for the Springfield Ponies of the Eastern League, as well as the Northern League’s Winnipeg Maroons, winning 22 games for them in 1933. After his playing days ended, the man now known as “Goldie” became the Maroons manager for a spell beginning in 1936. He also coached minor league hockey for over a decade.