The greatest players in NBA history played at The Palace 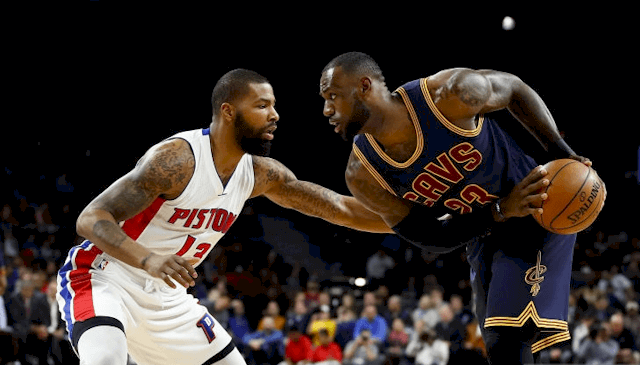 Lebron James faces off against the Pistons at The Palace of Auburn Hills in 2017.

LeBron James made his final visit to The Palace of Auburn Hills last week.

With the Pistons preparing to move downtown Detroit next season at Little Caesar’s Arena, the visit by the Cleveland Cavaliers kind of tips off the final hurrah of The Palace.

The Raptors, Heat and Nets all have games remaining at the Palace, plus the Washington Wizards, led by John Wall, will have the final regular-season home game on April 10.

There have been plenty of legends that have set foot on the court at The Palace: Jordan, Magic, Bird, Kareem, The Mailman, Ewing, Sir Charles, Dominique, Worthy, Clyde the Glide … every star from the Golden Era of the NBA.

Plus the next generation, that include Shaq, Kobe, Steve Nash, Dirk, A.I., D-Wade, Gary Payton, Tim Duncan, Alonzo Mourning, the list goes on, as does the current generation of stars like James Harden, Russell Westbrook, Kevin Durant, Steph Curry and Chris Paul.

Thursday marked the final game for LeBron at The Palace.

Let’s look at some of the other superstar’s final games at The Palace.

In 1991, Magic Johnson nearly had a triple double in his final visit to The Palace. He scored 31 points, dished out 11 assists and had eight rebounds.

In 2003, Michael Jordan scored 15 points in his final game at The Palace.

Kareem Abdul-Jabbar’s last game at The Palace was in the 1989 NBA Finals, and he scored 11 points in a loss to the Bad Boys.

Larry Bird had 21 points, 12 rebounds and eight assists in his final game at The Palace in 1992.

Charles Barkley had 26 points and 10 rebounds in his final game in 1998, while a member of the Houston Rockets.

Tim Duncan had 14 points and nine rebounds in his final trip last season.

There is quite the spectrum of performances. Patrick Ewing’s final game at The Palace was a two-point effort off the bench as a member of the Orlando Magic in 2002. Of course his last time as a member of the Knicks, Ewing mirrored his career totals with 20 points and nine rebounds.

Karl Malone also had just two points in his finale in 2004 as a member of the Lakers. He had 10 points the year before in his final season in Utah at age 39.

In 1999, Dominique Wilkins had two points in his finale, while playing for Orlando, after two seasons playing in Europe. His final year as a regular was 1995 and The Human Highlight Film poured in 32 points and grabbed seven rebounds as a member of the Boston Celtics at The Palace that season.

Unlike these stars, whose final trip to The Palace was because their careers were winding down. In this case, the building’s career is winding down marking the last appearance for King James.

James outdid the other legends with a triple-double, finishing with 29 points 13 rebounds and 10 assists. But the Cavaliers lost the game. It was a huge win for the Pistons and proved the rest of the final season at The Palace will be pretty exciting.