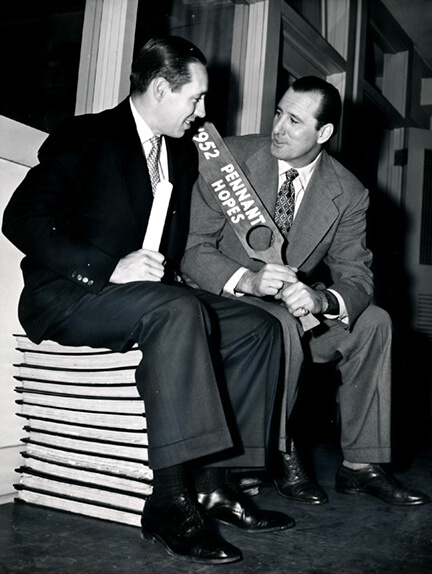 Cleveland pitcher Bob Feller (left) poses with general manager Hank Greenberg prior to the start of the 1952 season.

It was on June 12, 1997 that the Texas Rangers played host to the San Francisco Giants, the first regular-season game ever between an American and National League team.

In case you are wondering, the Detroit Tigers’ first interleague game was on June 13 that year. The Montreal Expos’ Carlos Perez outdueled Omar Olivares at Olympic Stadium, with future Tiger Ugueth Urbina notching the save.

I referred to interleague play as an experiment, since that is what it was initially. It looks like it is here to stay, although it still has its detractors. They believe it makes for an unbalanced schedule, and that it has destroyed the rivalry that once existed between the two leagues. I happen to agree with both of those arguments.

Interleague play may have been the baby of former commissioner Bud Selig, but he was hardly the first baseball mind to think it up. Baseball officials had mulled over the possibilities since at least as early as 1903.

Even former Tigers slugger Hank Greenberg once toyed with the idea.

His playing days were over, and Greenberg was the general manager of the Cleveland Indians.

He first broached the subject in 1953. That year, American League officials gave it perfunctory consideration in their annual August meeting, but quickly voted it down. Greenberg mentioned it in 1954 as well, and again in 1955, but each year he lacked a majority of American League votes to send it on to a major league-wide referendum.

In June 1956, he sent a letter to American League President Will Harridge, laying out the specific details of his novel idea. Greenberg wanted Harridge to have enough time to think it over before the owners met in New York in August.

In those days, major league baseball’s 154-game schedule was perfectly balanced: The eight teams in the American League played each other 11 times at home and 11 times away, likewise in the National League.

Under Greenberg’s blueprint, each AL club would play a home-and-away series with each NL entry. The key for Greenberg, however, was maintaining the 154-game season. “That’s an important point,” he insisted at the time. “By keeping the schedule at 154 games, the records are kept intact and comparisons remain completely valid.”

In order to keep it at 154, he proposed that the 11 home and 11 away games mentioned above be reduced to nine and nine, thus freeing up 28 games off of each club’s schedule.

Those 28 games could then be made up by playing clubs in the other league on a home-and-away basis.

In one key component, Greenberg’s grand scheme was a forerunner to Selig’s plan 40 years later: All interleague games would be played in a three-week period following the All-Star Game. “In that way,” he pointed out, “they would be over by mid-August, leaving the final six weeks of the season restricted to pennant competition within each individual league.”

In addition, Greenberg made clear that interleague games would not be mere exhibitions. They would count toward the regular season league standings and individual statistics.

First, it would spark renewed interest in the national pastime. “It would be a tremendous stimulus to attendance, especially in a one-sided race like the National League had last year.” In 1956, the Brooklyn Dodgers lapped the second-place Milwaukee Braves by 13 1/2 lengths.

Secondly, fans of mediocre teams could still enjoy going to games in order to see stars from the other league.

Finally, Greenberg believed that expansion in baseball was inevitable, but in order for it to happen, a realignment of major league clubs would have to occur. “This interleague schedule would be the first step toward that eventuality, paving the way.”

At the time, one of the objections to Greenberg’s plan was that the distinct identity of each league would be lost, an argument that many continue to make today.

This time, however, his American League counterparts were more favorable. In August, Greenberg got the votes he needed.

He awaited final approval by a majority of major league GMs in their December meeting in Chicago.

The vote never got to the floor.

Greenberg thought he had the support of his fellow AL GMs, but ironically it was Joe Cronin of the Red Sox and George Weiss of the Yankees who waved red flags. Once again, they argued that interleague play would destroy the AL/NL rivalry, removing the special mystique of (and interest in) the World Series and All-Star Game.

A frustrated Greenberg withdrew his proposal at the last moment.

Interleague play would have to wait another four decades.

The naysayers appear to have been correct. Any distinction between the American League and National League seems like a quaint concept, and much of that is due to interleague play.

Hank Greenberg, however, deserves commendation for seeking change in an industry that has historically been loath to do so.