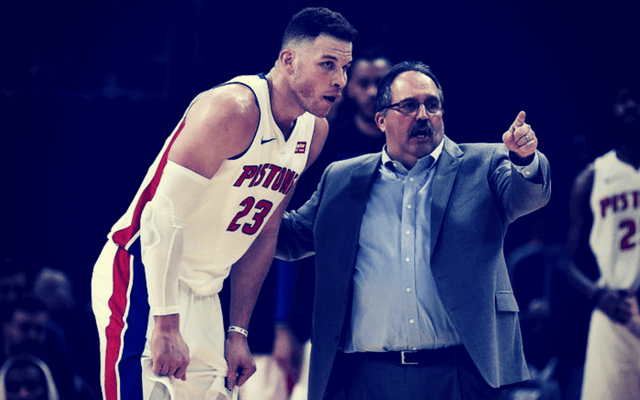 After an initial spurt of success when Blake Griffin was acquired two months ago, the Detroit Pistons have sputtered under head coach Stan Van Gundy.

The Pistons have taken a turn for the worse.

They have become a sad excuse for an NBA franchise, and the squad’s biggest acquisition in a long time, Blake Griffin, is at least partially to blame for it.

In a little over a dozen games in a Detroit uniform, Griffin has been taking slightly over five 3-point attempts a game, and has been making under 30 percent of them.

To make matters worse, he hasn’t even been shooting well from the field since being acquired by Stan Van Gundy and the Pistons.

Through 14 games in Motown, his field-goal percentage was a career-low 40.1 percent, and he was averaging a career-low 6.9 rebounds per game.

Griffin, despite the exciting start to his Pistons tenure with four straight victories, hasn’t been able to transform the Pistons into a playoff team in the Eastern Conference.

In fact, when he’s been on the floor, Griffin has had a negative impact on the rest of his teammates, according to Basketball-Reference.com’s “Box Plus/Minus” (per 100 possessions) stat.

According to Basketball-Reference, the stat is used “for evaluating basketball players’ quality and contribution to the team.” It “relies on a player’s box score information and the team’s overall performance to estimate a player’s performance relative to league average.”

If you’re wondering what that means, it indicates that when “Mr. Hollywood” has been on the floor, he’s been a below-average player, and has had a negative impact on the Pistons.

The Pistons are dipping further and further out of the playoff race by the day, too. They stood four games back of the Miami Heat for the eighth seed after their 0-2 road trip to Florida March 2-3 (lost to the Orlando Magic and then the Heat).

If the point of the trade was to get Detroit to the playoffs for the first time since the 2015-16 season, then the deal already appears to be a failure.

Yes, the Pistons could jump the Heat, and still sneak into the playoffs. However, who really believes that they’re going to be able to make up enough ground with seven of their next 10 games — starting with the reigning Eastern Conference champion Cleveland Cavaliers — being on the road?

And if you really do believe they can make up that much ground, please immediately take your crazy pills.

The Pistons haven’t won a road contest since beating the lowly Brooklyn Nets on January 10. Yes, it’s been almost two full months since the Pistons have beaten a team on the road.

Van Gundy is clearly not getting the most out of this team.

You can point to the Reggie Jackson injury as a reason why the Pistons haven’t played at their highest possible level. I understand that he’s only played in 33 games this season due to a Grade 3 right ankle sprain.

However, remember that the Pistons have lost to some bad teams on the road since Jan. 10, including the Chicago Bulls, Atlanta Hawks, Charlotte Hornets and aforementioned Magic.

If you want to be a playoff team, you have to win those games. No excuses, period.

There are also no excuses for guys taking plays off on defense, including the squad’s two-time All-Star center Andre Drummond. Or for Drummond and Griffin, Detroit’s two franchise players and supposed leaders, “yucking” it up on the bench during a 16-point loss to the Hornets Feb. 25, especially when the Pistons had lost four of their last five games going into that contest.

With Van Gundy reportedly barely gripping onto his dual-role gig with the Pistons, things aren’t looking all so bright for his job security past this season.

Making the playoffs is of utmost importance for keeping him away from the unemployment line at the end of the season.

Unless improvements are made (i.e. the defensive effort improving and Griffin beginning to play better and meshing with Jackson once he returns from injury), don’t expect a playoff appearance.

Failing to qualify for the postseason wouldn’t be the worst thing in the world, either. The reason why: It would likely signal the end of the disappointing Van Gundy era.

Understandably, the Pistons’ fan base is fed up with the lack of progress the team has made since the beginning of SVG’s tenure in Motown.

Van Gundy’s had almost four full seasons to prove his worth, and all that he’s proven is that he’s not equipped to either run the Pistons’ front office nor lead the franchise from the sidelines.

The Pistons need a facelift, and it has to start at the top.

Van Gundy needs to be removed from both his roles with the organization at season’s end.