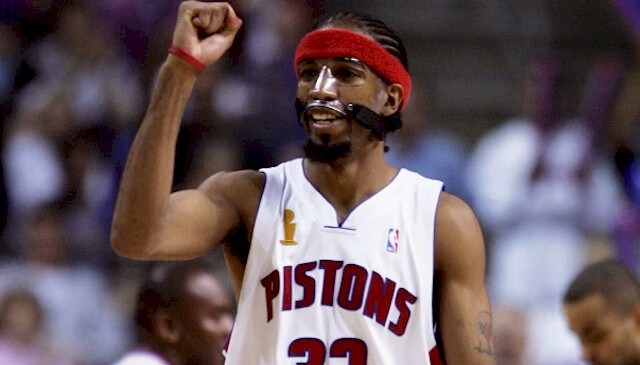 Richard “Rip” Hamilton was a key part of two Detroit teams that went to the NBA Finals, winning in 2004.

When Richard Hamilton’s number rose to the rafters at The Palace on Sunday, it marked the end of two eras.

Hamilton’s jersey will likely be the final number retired from the 2004 NBA championship team and it also will be the last one retired at The Palace of Auburn Hills.

With the Pistons moving downtown next season, The Palace, like Joe Louis Arena, is in final countdown. While Detroit fans knew it was going to happen sooner or later to The Joe, it was a little surprising how quick the Pistons jumped into Little Caesars Arena.

The Palace ushered in the championship era of the Detroit Pistons. The Pistons were on the rise throughout their final three seasons playing at The Pontiac Silverdome, but became champions of the world in 1988-89 — the first year of The Palace.

The Pistons toppled the Lakers that year, then successfully defended their title by beating the Portland Trail Blazers the following season.

It was a spectacular beginning for The Palace. The end won’t be so spectacular.

The Pistons are much better than they have been in recent years, but are a far cry from a contender.

That is why it was so important for the Pistons to honor those who brought NBA titles to The Palace, while the team was still in the building.

Following the Bad Boys era, the Pistons had several years of transition, new uniforms and new stars like Grant Hill.

But it was when former Bad Boy Joe Dumars took over that things began to piece together again.

The Pistons brought in Chauncey Billups, Hamilton, Ben Wallace and drafted Tayshaun Prince, while picking up the missing link, Rasheed Wallace, during the championship season. Detroit had made it a habit of getting eliminated in the Eastern Conference Finals prior to Rasheed’s arrival.

It was a perfect blue-collar team that Detroit embraced. Billups was a great player, but not a superstar. Ben Wallace was undrafted and played at a small college but became a four-time NBA Defensive Player of the Year, which will probably land him in the Basketball Hall of Fame eventually.

Hamilton had the most talent of that group and showcased the art of the mid-range jump shot, something that very few in the league mastered. He was in constant motion, which lined up with the blue-collar approach to the team.

On Sunday, Hamilton’s No. 32 rose to the rafters alongside the No. 1 of Billups and the No. 3 of Ben Wallace.

For Pistons fans, it was important to see those three numbers hanging in The Palace before the Pistons left the home that saw three NBA titles and two spectacular eras of Pistons basketball.

For many fans, The Palace will always be remembered as home. For Billups, Wallace and Hamilton, their numbers prove it was their home, too.