Harvey Kuenn was Tigers’ First Rookie of the Year 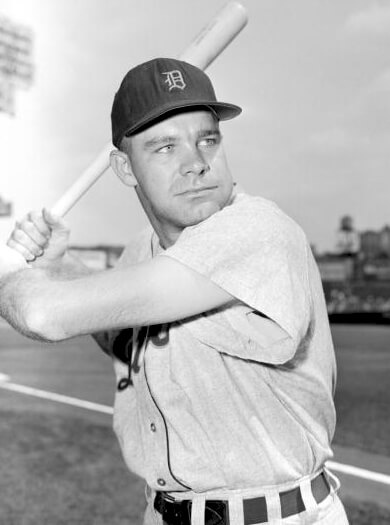 Harvey Kuenn debuted with the Detroit Tigers in 1952 and he was Rookie of the year the following season.

With his effortless swing, Kuenn was a hitting machine during his 15-year major-league career (1952-66), spraying the ball to all fields en route to 2,092 base hits and a .303 lifetime average.

Harvey’s best years were in Detroit during the 1950s. He hit .314 as a Tiger, led the American League in hits four times, in two-base hits three times, and was a perennial All-Star—first at shortstop, then as a center fielder. Most famously, Kuenn was traded to Cleveland for Rocky Colavito prior to the start of the 1960 season—a straight-up swap of the American League’s batting champion for the league’s home-run champ. Kuenn had batted .353 in ’59 and Rocky had hit 42 homers. You just don’t see trades like that anymore.

Rangy, soft-spoken, and full of simple good cheer, Kuenn was popular with fans, teammates, and sportswriters. He called everyone “Slug,” kept a six-inch chaw of tobacco jammed into the upper recesses of his jaw, and drank beer at a championship level. Never one to forget his working-class roots, as a rookie Harvey used a chunk of his bonus money to buy his parents a new house.

Kuenn, who was a prep legend on Milwaukee’s south side, signed a $55,000 contract with Detroit in 1952 after his junior year at the University of Wisconsin. The 6-foot-2 shortstop was assigned to the Tigers’ Class B farm team in Davenport, Illinois, then called up to the big club for the final three weeks of the ’52 season.

In his first big-league game, on September 6, 1952, Kuenn had two hits against Chicago’s Joe Dobson at Briggs Stadium. He had two more base hits the next day, and then two more the game after that. In fact, Kuenn had a hit in all but three of the 19 games he played, posting an impressive .325 average in 80 at-bats for the last-place Tigers. Demonstrating a remarkable eye, he struck out just once.

In 1953, his first full season, Kuenn was penciled in as the Tigers’ everyday shortstop and leadoff batter. Just to show that the previous September’s cameo was no fluke, the 22-year-old rookie started off the 1953 campaign with a 10-game hitting streak. This meant he had hit safely in 26 of his first 29 big-league games! Few players in the history of baseball have broken into the majors with such a display of batting consistency.

“The pitchers up here have a lot more stuff and control than I’ve ever seen before,” Kuenn said that summer. “To me, they all seem tough. But it’s great to be here. I just can’t believe it. It was only yesterday I was reading about these guys.”

Kuenn, whose talent put old pro Johnny Pesky on the bench, was a bit of an anomaly. Whereas most shortstops of the era made the big club on the strength of their glovework, Kuenn’s fielding was viewed by the Tigers as a work-in-progress. Any shortcomings he may have had in the field were more than compensated for by the offense he generated.

The Tigers, in the midst of a major overhaul, were horrible in 1953, finishing sixth, 40.5 games behind the Yankees. Kuenn, the team’s sole representative to the All-Star Game, was one of the few bright spots. By season’s end he had banged out 209 hits (best in the majors) in 679 at-bats (still a Tigers record) for a .308 average.

When it came to selecting that year’s top American League rookie, the voting by baseball writers wasn’t even close. Kuenn received 23 of 24 votes, with Boston center fielder Tom Umphlett—who had batted .283 in 137 games for the Red Sox—getting a single vote.

While Umphlett quickly disappeared from the majors, Kuenn stayed in the game for years and years, playing for the Giants, Cubs, and Phillies, then returning as a coach and manager. In 1982, Kuenn led his hometown Milwaukee Brewers into an unexpected World Series appearance against St. Louis. “Harvey’s Wallbangers” lost a heart-breaking seventh game, but in the process the media had turned the gimpy, easy-going manager into one of the country’s blue-collar darlings.

Kuenn was cursed with circulatory problems during his latter years, undergoing quadruple bypass surgery and having one of his legs amputated below the knee. He was only 57 when he dropped dead of a heart attack one day in 1988. All of baseball lifted a glass to Kuenn, who during his rookie season had been described by Johnny Pesky as “a nice, quiet kid….the kind of kid you like to take home to your sister.”