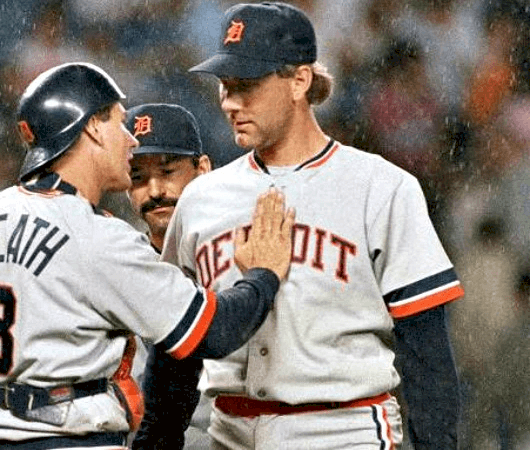 Mike Henneman is congratulated by catcher Mike Heath and third baseman Tom Brookens after saving a game for the Detroit Tigers in 1988.

The Detroit Tigers have had some shaky closers the past decade. Pitchers who put guys on base and make for a heart-attack style ninth inning for fans, whether they got the job done or not.

But before Todd Jones, Jose Valverde, Fernando Rodney, and Joe Nathan made us all check our blood pressure, the Tigers had a great tradition of relief pitching, which ended with Mike Henneman.

It began with John Hiller in the 1960s and he pitched in Detroit until 1980. The Tigers immediately felt his absence and struggled to find a replacement.

A momentous trade brought Willie Hernandez to Detroit in 1984 and finally with another elite reliever, the Tigers won the World Series. Southpaw Hernandez won the Cy Young and MVP that year and made his first of three All-Star appearances. The Tigers were fortunate to also have the services of “Señor Smoke,” the rotund but flamethrowing Aurelio Lopez, a righthanded counterpart to Hernandez.

Hiller and Hernandez both had great success with the Tigers, success that has rarely if ever been matched by relief pitchers in baseball history, as Michael Betzold explained in an article earlier this year.

As Hernandez got older and finished up in 1989, he watched the next young reliever become and All-Star: Mike Henneman.

The man with the cleft chin could get outs.

In Henneman’s rookie year, he went 11-3 with a 2.98 earned run average. A remarkable season which somehow placed just sixth in the Rookie of the Year voting in 1987.

The next year the Missouri native and Oklahoma State product was even better with a 1.87 ERA, 9-2 record and 22 saves. It was his first of six 20-plus save performances. But Henneman was the last in the old style of relief that wasn’t based on saves.

In 1989, Henneman made his only All-Star appearance as a reliever, but had just eight saves that year. But he went 11-4 as the best relievers still were after wins, not just saves.

The tall, lean righthander utilized four pitches: a fastball that topped out at about 92 miles per hour; a slider, a sinker; and a changeup. Practically unable to throw a ball straight, he was one of those hurlers who had natural movement on all of his pitches. For him to be effective he had to keep the ball low, near the hitters’ knees. He often did.

A versatile reliever like Henneman should have been an All-Star more than once, but with many people fixated on the save number, Henneman was always a little way down the list.

But in nine years with Detroit, he won 57 games and had 154 saves — which amazingly still ranks second behind Jones, who had 235.

All those years getting saves, but not focusing on saves made Henneman one of the top relievers in the game. As far as Tigers’ fans were concerned though, he wasn’t much to get excited about. Baseball was shifting to the dominant one-inning closer personified by Dennis Eckersley, John Wetteland, and others. Henneman was efficient but not flashy. He also pitched for only four winning teams in his nine seasons in Detroit. You can’t rack up big saves totals if your team rarely wins.

It’s fitting Henneman became a pitching coach in the Tigers’ organization after his career because he flat-out knew how to pitch and didn’t worry about the numbers — something young players need to be reminded of.