Here’s how the Tigers can still make the playoffs 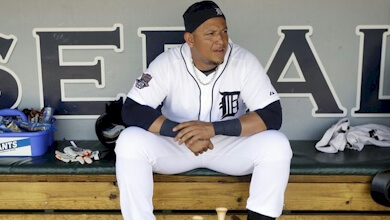 Can the Detroit Tigers stick close until Miguel Cabrera returns?

When Miguel Cabrera came up gimpy on July 3 and his league-leading .350 batting average and awesome 1.034 OPS went on the DL, it jolted the Tigers. Other hitters immediately started picking up the slack. J.D. Martinez homered in each of the next three games—and two additional games since. Yoenis Cespedes had fifteen hits in the next eight games. Nick Castellanos went on an 11-for-30 run and raised his OPS 124 points. Victor Martinez, healthy again, continued his resurgence; his OPS of .858 in June increased to .967 in July.

The Tigers won four out of six, and it looked like they were back in the hunt. Justin Verlander finally pitched a good game, and Detroit seemed poised to win the series in Minnesota and begin their climb past the Twins. Then disaster struck with that improbable ninth-inning giveaway. And before Monday’s win against the Mariners the Tigers lost five out of six to plummet below .500 for the first time since April of 2013.

But improbable as it may seem, Detroit is still alive. They’re actually in a position to get back to the World Series this year. Time is running out, but thanks to the current playoff format and a season of incredible parity in the American League, they still have a chance. The Tigers can claim a wild-card playoff spot by winning showdowns against several of their chief competitors.

The Royals are out of reach, but the second wild-card spot is not out of the question. The Tigers are bunched closely with the nine other teams who are three to eight games out of the second playoff spot, behind the Twins and the Astros. But at least they are nearer to the front than the back of that crowded pack of also-rans. The Tigers and the three on the outside looking in are all within a game of .500.

Out of this muddle a contender will have to emerge to challenge the surprise teams who now have a wild-card berth, Houston and Minnesota, each of whom is likely to struggle to win more than they lose the rest of the way.

Every game from here on out is a big game, but the biggest are those against other leading wild-card rivals, the Astros, Twins, Orioles, Blue Jays, and Rays.

That’s why the last two weekends were such a disaster; Detroit had a chance to pull close to Minnesota and get ahead of Baltimore.

The Tigers cannot afford any more such missteps. But the schedule holds out some hope. Of their last seventy-one games, they have only seventeen games against really good teams—twelve against Kansas City, three against the Angels, and two against the Cubs. It’s OK if they only win only half of those games; let’s project eight. They also have three left against Houston and six against the Twins, and those nine games are a fantastic opportunity to help both those Cinderella teams fall down out of a playoff spot and clear the way for Detroit and the others who have been treading water. Can they win six of those nine?

All the rest of the Tigers’ games—that is, forty-five of them, are against teams that are right around .500 or well below it. They have thirteen games against the teams nearest to them in the wild-card standings—the Jays, Rays, and Orioles—and winning those series are crucial. Let’s dream of eight wins and five losses there. And they have thirty-one left against teams below them—the Indians, White Sox, Red Sox, Mariners, and Rangers—plus a makeup game with the Reds. They need to win a lot of those games—both to improve their own record and to keep any of those four from clawing back into the race. Do you think they can win nineteen of those thirty-two games? That would give them eighty-five wins, and this year, that might be enough.

I guess this is what the geniuses who invented the wild card format had in mind, a dogfight to the finish.

If Detroit manages to get it together and emerge with the second wild card spot, they have as good a chance of anyone of getting through to the World Series. There are no super teams this year. On paper, Detroit is the equal of anyone in the AL.

Now all they have to do is prove it.

It’s not an impossible task. In fact, I can see the Orioles and Tigers finishing as the two wild-card teams, narrowly edging out the Jays, Twins, Astros, and another couple teams that still have a pulse. But that’s only going to happen if the Tigers can find another decent starter or three, if Neftali Feliz can help resurrect the bullpen, and if they get a more credible interim first baseman than Marc Krauss.