Higginson was a lone bright spot on many bad Tigers’ teams 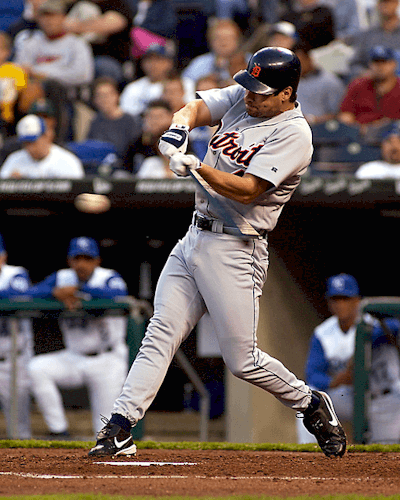 Bobby Higginson hit 187 home runs in eleven seasons with the Detroit Tigers from 1995 to 2005.

If you yelled “Higgy” around the confines of Tiger Stadium and then later Comerica Park in the mid-to-late 1990s and early 2000s, Tigers fans would know instantaneously that you were referring to one Bobby Higginson.

The corner outfielder, who was equipped with a more than capable throwing arm, was a key member of the Detroit Tigers everyday lineup from 1995-2004. It was a 10-year stretch in which the left-handed slugger recorded a solid .359 on-base percentage and a more than apt on-base plus slugging percentage of .816.

During this time, he also hit a total of 187 long balls, good for a yearly average of nearly 19 homers.

Not too shabby for a guy who never played in another major league game after the 2005 season.

And because he never stepped onto a big league diamond after the ’05 campaign, he missed out on the Tigers’ improbable run to the World Series in 2006.

Subsequently, he also never played on a winning ballclub in his major league career.

When he hit 30 home runs for the first and only time in 2000, I remember thinking to myself that it would be the first of many times that the then 29-year-old would do so. He was on the right side of 30, and still had a few years of prime baseball left.

I felt it was a certainty that the Tigers were also on the verge of something good, as they had won 79 games, their most since also winning 79 contests in 1997. But this 79-win campaign was different because it occurred during Comerica Park’s inaugural season, which created a lively atmosphere around the ballpark and reinvigorated the Detroit fanbase.

The 2000 campaign along with the one from ’97 also marked the club’s best finish since my birth year of 1993, which, at the time, was still the last time they had recorded a winning record (85-77).

But man, was I was wrong about Higgy and the Tigs.

In fact, from 2001-05, the Tigers never won more than 72 games, and they flatlined in 2003 with an American League-worst finish of 43-119. It was one loss shy of tying the 1962 expansion New York Mets club for the worst record in the modern era (1900-present) of Major League Baseball history.

Additionally, when Higgy’s playing ability left him, it did so in a major way.

After a down season in 2001 in which he only hit 17 bombs, he never hit as many as 15 home runs in a season again. Instead, he hit a total of 36 homers the next three seasons, which were marred by injury, before bottoming out in his injury-destroyed ’05 campaign with zero.

When you dive further into his stats and compare his 1996-2000 campaigns to his 01-05 campaigns, you’ll also see a big difference in Higgy’s production.

From 96-00, Higgy’s numbers were good enough to place him among the best hitters in the game. He hit 120 long balls in that five-year span, which was good for an average of 24 per season. He also recorded an above average OBP of .373 and an equally impressive slugging percentage of .504, which equated to an OPS of .877.

In stark contrast, from 01-05, the one-time fan favorite was no longer that, as his contract rose to as high as $11.85 million during the ’03 campaign while his production at the plate went in the opposite direction.

He only hit 53 homers and slugged at a clip of .402 during the five-year span. His OPS also dropped 100-plus points to .747. He was no longer an All-Star caliber outfielder during this time.

However, in that first five-year span that was looked at — from 96-00, he was an impact bat and good enough to have been named to an All-Star team. Yet, he never was, and what a travesty it is that he never was.

No one else on the ’00 Tigers recorded more than four wins above replacement. Then-starting second baseman Damion Easley recorded a 4.0 WAR. If you remember right, current club skipper Brad Ausmus was also on that team, and wasn’t half bad. In fact, he recorded the third-best WAR on the club for that season (3.3 WAR).

At any rate, the point is that Higgy was screwed out of a spot on the ’00 AL All-Star team.

I bet he wishes that he would’ve played on an All-Star team and on a winning MLB club. I, for one, wish he would have.

However, I guess the Rolling Stones are right about how “You Can’t Always Get What You Want.”

You can’t always get what you “deserve” in life, either. Just examine Higgy’s career, and you’ll easily figure that out.

You also can’t go back in time and grant Higgy an All-Star Game appearance or two, or put him on a winning team. Yet, the one thing you and I can do and should do is give him the recognition he deserves as one of the Tigers’ best players during the club’s darkest period.