Hiring Wood is another bad decision by the Lions 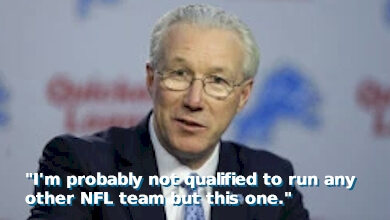 New president of football operations Rod Wood admitted his best credentials are his relationships with the Ford family.

My gosh, the Detroit Lions have screwed the pooch again.

It was thought the franchise was possibly turning the corner after 90-year-old owner Martha Firestone Ford fired Tom Lewand and Martin Mayhew for their collective ineptness.

Yet, exactly two weeks later, the Lions proved yet again to its fanbase to never get its hopes up.

A national search was promised to pick the organization’s next team president, which meant that Ford and her allies wouldn’t be tapping someone from within the family or close to the family to fill the vacant spot in the front office.

Or at least the loyal-to-a-fault Detroit faithful believed such was the case in an attempt to be optimistic about the one pro sports team in the city of Detroit that has gained the reputation over the years of being able to regularly induce pessimism in its fans.

It’s sadly the reputation the Lions have gained, and it won’t be going away anytime soon after the hiring of longtime Ford family confidant and Ford Estates President and CEO Rod Wood as the successor to Lewand.

Ron Wood is not a football guy, and it’s not just me saying it. Wood said so himself in the opening statement of his introductory press conference that was mocked and ripped to shreds by fans and pundits alike.

Wood’s admittance of that and of the fact that he’s probably “not qualified to run any other NFL team” is not the way that anyone wanted to see him start his tenure. Skeptics were already lined up in large numbers to criticize the hire due to his being “one of them,” and Wood’s comments only added fuel to the fire.

It made those who disapproved of Wood’s hiring yearn for the days of former team president Matt Millen.

Okay, let’s not go that far to describe the anguish that many Lions fans suffered when they heard the news of Wood’s hiring on November 19.

Millen, remember, did lose 84 games in his infamous tenure in Motown that spanned seven full seasons and the first three games of the 2008 campaign.

It made Millen the architect of the worst single season ever recorded by an NFL team.

It’s something that Wood, despite his lack of football acumen, is unlikely to endure no matter how long he stays on with the organization because of how the football “gods” tend to operate, giving everyone at least one loss and one win a year.

And as long Wood fulfills his promise of allowing the next general manager to call the shots on all personnel decisions, he’ll be able to steer clear of much of the wrath of Lions fans who are bound to be disappointed by something during his stint as head of business operations.

Experiencing disappointment as a fanbase will never cease to exist as long as the Ford family is in charge.

The only way of having a chance to get rid of it and to turn the franchise into a consistent winner is through the Ford’s selling the team that they have owned since the late William Clay Ford purchased a controlling interest in the squad in 1963.

Will the Ford’s do what’s best for the franchise and move aside to allow someone else to take the reins? No.
Instead, it’s more than likely they will continue to do what they know best: rake in the cash while keeping the Lions, who have won one playoff game since 1957, the laughingstock of the league.