The History of Opening Day and the Detroit Tigers 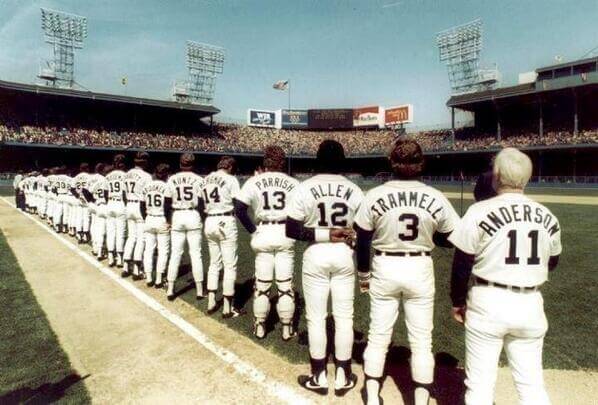 The Tigers line up for their home opener in 1984 at Tiger Stadium in Detroit.

To help us get revved for the new baseball season, here’s a look at the history of opening day for the Tigers and the city of Detroit.

For 15 seasons, Charlie Bennett was one of the best catchers in professional baseball in the late 19th century, eight of them spent with the Detroit Wolverines. Before the 1894 season he lost both legs in a train accident that ended his career. For the remainder of his life, into the 1920s, Bennett appeared on opening day in Detroit to take part in the festivities, an immensely popular figure in Detroit. He tossed out the first “first pitch” in Detroit. In 1896 the ballpark at Michigan and Trumbull in the Corktown section of the city was named in his honor.

In all, 55 pitchers have started on opening day for the Tigers. Jack Morris has made the most starts with 11, followed by George Mullin (10), and Justin Verlander, who made his ninth start in 2017.

LIST: Most Opening Day starts by pitchers for the Detroit Tigers >

Tigers are winners on Opening Day in Detroit

The Tigers are 67-50 on Opening Days in Detroit since 1901. Their most common opponent has been the Indians, against whom they have a losing record of 12-18. Detroit is 11-8 against the White Sox in home openers. This season they will play their home opener against the Pirates for the first time. The Tigers are 12-6 in their 17 home openers at Comerica Park since 2000.

Most starts on Opening Day in MLB history

Jack Morris made a total of 14 starts on opening day, for the Tigers (11), Twins (1), and Blue Jays (2). That ranks second all-time in baseball history behind Tom Seaver (16). Lefties Steve Carlton and Randy Johnson also toed the rubber on opening day 14 times.

Tiger record for most starts by position players

Postponed due to snow!

In the above photo, Tiger outfielder Davy Jones is at bat during the 1911 home opener in the middle of a snow storm on April 13. The Tigers beat the White Sox that day at Bennett Park, 4-2. On at least two other occasions, the Tigers’ home opener was scrubbed due to snow, the last time in 1979 when over a foot of snow was on the ground. The latest snowed out game was in 1923 when the Tigers cancelled a game at Navin Field on May 13th(!) due to the white stuff.

The earliest home run ever

In the home opener in 1986, Jack Morris made history when he surrendered a home run on the first pitch of the season. The home run was hit by Dwight Evans of the Boston Red Sox. The Tigers recovered from the startling start to their season and won the game 6-5, in large part due to a pair of homers by Kirk Gibson. The home run by Evans remains the only time a batter has hit the first pitch of the season for a round-tripper.

See the boxscore from the ’86 opener >

Twenty runs out of the gate

The biggest scoring outburst by the Tigers on Opening Day came on April 13, 1993, against the A’s at Tiger Stadium. In an afternoon game, the Tigers delighted a crowd of nearly 50,000 by scoring 20 runs. Detroit scored early and often: four in the first (highlighted by a three-run jack off the bat of Rob Deer); three in the second; one in the third; and eight big runs in the fourth inning. In the fourth frame the Tigers sent 12 batters to the plate and had 12 hits. Cecil Fielder went 4-for-4, Travis Fryman had five RBIs, and Mickey Tettleton had 3 RBIs. The powerful Detroit offense banged out 18 hits and also reached base 12 times via walk. That year the Tigers would lead baseball with 899 runs scored.

The MLB record for most homers on Opening Day is eight by three players, all with ties to the Reds: Frank Robinson, Ken Griffey Jr., and Adam Dunn. The most by a Tiger is three by Kirk Gibson and Dmitri Young. Young hit all three of his in the 2005 opener against the Royals at Comerica Park. Former Tiger Richie Hebner hit six home runs in the first game of the season, but only one of them in a Detroit uniform, a three-run game-winner in 1981 at Tiger Stadium.

That’s a lot of hot dogs

The largest crowd to see an Opening Day game in Detroit was on April 6, 1971, when 54,089 filed in to Tiger Stadium to see the home team face the Indians. The Tigers won 8-2 behind a six-hit complete game by Mickey Lolich. It was one of seven opening day starts by Mickey.

Nine runs down? No problem…

On April 25, 1901, in their first game in the American League, the Tigers made an amazing comeback on Opening Day at Bennett Park at the corner of Michigan and Trumbull. Detroit trailed the visiting Brewers 13-4 entering the bottom of the ninth. It seemed like the Tigers would start their entry in the American League with a lopsided loss. But wait…the Tigers got a runner on, then another, then a walk, and another hit, and a passed ball, and a hit, and another, and another. You get the idea. The Tigers scored ten runs to steal the game 14-13. The fans were thrilled to see the walkoff victory (though it would be decades before that term existed). Amazingly, the rally from nine runs down remains the biggest ninth inning comeback in league history.

After three hits on Opening Day in 1985, Chris Pittaro was on his way to becoming a great Tiger, right? That’s what a lot of people thought, largely because Sparky Anderson touted the rookie as a “star” out of spring training. He was so good, Sparky considered moving All-Star second baseman Lou Whitaker to third base (this only one season after the Tigers had captured the World Series). But, Sweet Lou balked at the idea and stayed at second, while Pittaro started the year at third. The rookie was hitting over .300 through April, but in May he went 1-for-19 and lost his job. Pittaro played only 28 games as a Tiger in ’85 before being traded in the offseason.