When hockey’s all-stars came to Detroit to skate 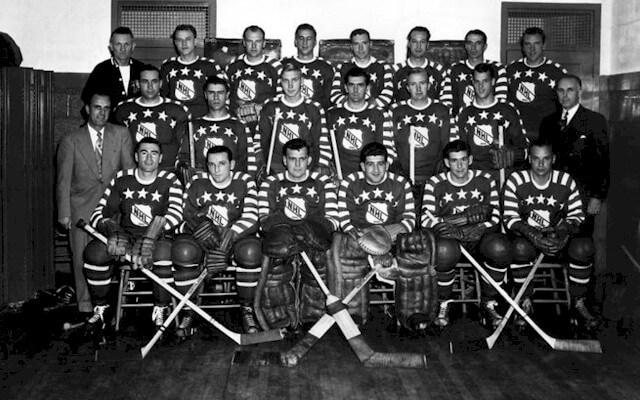 The 1950-51 Detroit Red Wings dressed for the 1950 NHL All-Star Game played at Olympia in Detroit.

For sixty years the Olympia stood in downtown Detroit, serving as home to the Red Wings. When it was opened, it was trumpeted as the third largest sports arena in the world. Even though it was grand in size and stature, the building became known affectionately as “The Old Red Barn” because of the eye-popping brick exterior.

While many historic and exciting events occurred there, Olympia was best known for hockey. At the time it was constructed for a cool $2.5 million in 1927, the arena featured the largest ice rink in North America. The Red Wings won seven championships during their tenure there and the building hosted 18 Stanley Cup Finals. That’s a lot of high-intensity checking.

On four occasions the NHL played their annual All-Star game at the Olympia. Here’s a look back at each of those games.

In the early days of the NHL, the All-Star Game was a matchup of the previous year’s champion against stars from the other teams in the league. The game was also played in the fall, usually in October, earlier in the season than it is now.

On October 8, 1950, hockey’s greatest players gathered in Detroit for the NHL’s fourth annual All-Star contest. Less than six months earlier the Wings had defeated the Rangers in a thrilling double-overtime Game Seven thriller in the same building. This time it was Detroit against everybody. It proved to be a mismatch. The Wings scored seven goals and skated circles around the league All-Stars, winning 7-1 in front of more than 10,000 at The Barn. Detroit goalie Terry Sawchuk was marvelous in the net, helped by his ferocious defense. Ted Lindsay scored four points and recorded the first hat trick in All-Star history. Sid Abel scored two points, and Gordie Howe had three points, including one shorthanded goal.

The Wings dominance in this game was so total that the league decided to change the format of the game the following year. Instead of the defending champ squaring off against a squad formed from the other five teams, the NHL split the teams based on the “first” and “second” ranked players in the league. So the best center and forwards would form one line, and the second best would be on the other team, and so on. As a result, in 1951 the game saw Gordie Howe on the first team playing against Abel, who was on the second team.

The league was still using a “split” format where they put the all-league first team of stars versus the second team. But the Wings (defending Cup champs) were loaded and all eight of their representatives were on team #1 for the game to played on October 5, 1952. This included Bob Goldham, Gordie Howe, Red Kelly, Tony Leswick, Ted Lindsay, Marty Pavelich, Terry Sawchuk, and Reg Sinclair. The game was a dud however, as neither team could get any offensive momentum going. It finally ended in a 1-1 tie, the second year in a row that the All-Star Game had a low-scoring deadlock. Changes needed to be made.

On October 2, 1954, Detroit hosted the All-Star Game as the league continued to give that honor to the defending Cup champion. The previous year the format had been returned to All-Stars vs. the defending champ, so it was now the Wings sckating against the other stars of the league. A new young skater was on the ice for the second incarnation of the Production Line for Detroit: center Alex Delvecchio, who fit nicely between wingers Howe and Lindsay. But the Red Wings could only manage a 2-2 tie as 10,689 looked on.

This was the pinnacle of the Red Wings’ dynasty during the Howe Era, the game being played on October 2, 1955. The team were two-time defending champions with a roster of stars that have rarely been seen in hockey history. The Detroit lineup included Red Kelly, Marcel Pronovost, and Bob Goldham on defense, with Delvecchio, Howe, and Lindsay back as The Production Line II, with young Glenn Hall in the net. The second line that featured Dutch Reibel at center was also formidable. Reibel got the scoring going with a beautiful goal from the left crease, and the Wings rolled to a 3-1 victory over Maurice Richard and former goalie Terry Sawchuk, now wearing the sweater of the Bruins. A crowd of 10,111 saw this game, which would be the final NHL All-Star Game played in the famed Olympia building.

In 1979 the Red Wings played their final game at the Old Red Barn. The following year they hosted the All-Star Game at their new home, Joe Louis Arena on the banks of the Detroit River. On February 5, 1980, the Wales Conference team defeated the Campbell Conference team, 6-3 at the Wings new venue behind head coach Scotty Bowman of Buffalo. At a time when the Red Wings were a mediocre team, the only player they had on the ice was Reed Larson, who at 13:12 of the third period excited the home crowd with a goal. Also playing in this game was 51-year old Gordie Howe, who had an assist in third period. Playing on the other side was 19-year old Wayne Gretzky. It was truly one of the most incredible games in hockey history.