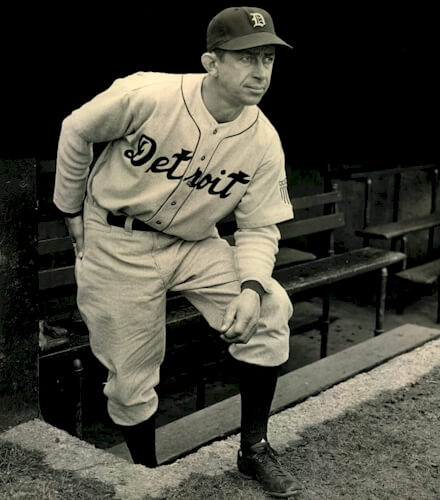 The Tigers thought Chuck Hostetler was a 38-year old rookie in 1945, but he was actually older.

Physical errors, mental blunders, and spectacular plays are magnified during the post-season. The recent playoffs and World Series were certainly no exception. In fact, they seemed to produce more than the normal share of memorable plays, both great and boneheaded. Eric Hosmer’s mad dash to home on a grounder, Lorenzo Cain’s scurrying home when Jose Bautista threw to the wrong base, Daniel Murphy’s Buckner-like error—all will likely be remembered after the snow melts next spring and beyond.

But for a memorably embarrassing post-season event, it’s hard to top what happened to a Detroit Tiger in the 1945 World Series—though it is no longer nearly as infamous as it once was.

With so many regular players serving in the armed forces, including Hank Greenberg, baseball during World War II was something like a B movie shot on a big Hollywood studio stage. The remaining players often stunk up the place. Fans understood why, of course, and usually refrained from ridiculing the personnel, many of whom, for some physical reason or another, had been rejected for wartime service. Besides the lame and the weak, they included a lot of older players.

Remembered as baseball’s oldest rookie, Chuck Hostetler said he was thirty-eight when he joined the Tigers in 1944—the same age as regular outfielder Doc Cramer. Actually, though, Hostetler was forty—well past the average age of retirement, even in wartime. But Detroit, having lost outfielders Barney McCosky and Ned Harris to the military, was desperate for an outfielder—so desperate that the club managed to find and contact Hostetler late in 1943. He’d been out of organized ball for five years and was playing only semi-pro ball occasionally in Texas and neighboring states. Someone in the front office, scrounging all over the country for serviceable players, must have remembered that back in the 1920s Hostetler had been a much-heralded prospect for the Boston Braves. He’d never panned out, though; the Braves released him in 1929, and he spent nine years bouncing around in the minor leagues in both the Browns and the Senators’ farm system.

After showing the Tigers in spring training at Evansville that he could hit the diluted remnants of major-league pitching Hostetler made the most of his unexpected opportunity, replacing the injured Cramer early in the 1944 season and for awhile tearing up the league. In early May, he was leading the league with a .444 batting average. But then, not surprisingly, pitchers learned how to handle him and he fell off his lofty plateau. For the season, he still ended up playing in ninety games for the Tigers as a fourth outfielder and batting .298. The forty-year-old even managed to steal four bases!

Hostetler hung on to play a very limited reserve role in 1945, batting just .159 and appearing in only forty-two games. When the Tigers won the league pennant by a thin margin over Washington, he begged manager Steve O’Neill to put him on the World Series roster—and for some reason he did. Though limited to just three pinch-hit at-bats, Hostetler did leave an indelible mark on the Fall Classic.

In the seventh inning of Game Six, with the Tigers leading the series, 3-2, but trailing the Cubs, 5-1, Hostetler led off the inning by pinch-hitting for light-hitting shortstop Skeeter Webb (a .199 hitter that year who was batting first in the lineup!). He reached on an error by Cubs third baseman Stan Hack then advanced to second on a grounder. Cramer singled to left field and the enthusiastic Hostetler ran right through O’Neill’s stop sign at third base.

Hostetler tried to put on the brakes, but he was forty-two. Stumbling, he fell face-first to the ground halfway between third and home. Stranded, he then “tried to swim unsuccessfully to home plate,” in the mocking account of one writer. He was ignominiously tagged out in a rundown by Cubs shortstop Roy Hughes—it was scored 7-2-6—as the Wrigley Field crowd hooted. The Tigers went on to score two runs that inning and ended up tying the game 7-7 in the ninth. Had Hostetler held at third rather than being erased, his run would have meant three that inning and a Detroit world championship. Instead, the Cubs won the game in the twelfth inning, 8-7.

Fortunately, the Tigers won 9-3 the following day to take the series in seven games. Hostetler did not appear in the game; he might have been hiding in the dugout. That was the last time the Cubs have appeared in the World Series; and the Tigers have won only two world championships in the seventy years since. Hostetler was released in January 1946, but the memory of the “Hostetler flop” outlived his brief career.