How are the Tigers’ Top 10 Prospects Doing? 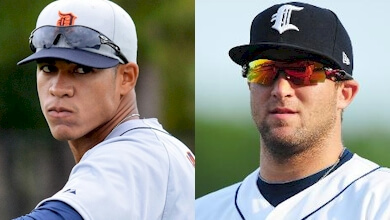 Young outfielders Steven Moya and Tyler Collins are waiting their turn to play in Detroit but are blocked by Yoenis Cespedes and J.D. Martinez.

The Detroit Tigers need help down on the farm, and current club president Dave Dombrowski doesn’t seem like the right man to turn around the system with his recent track record of relying on veterans at the expense of youth.

Here’s a look at the ten players ranked by Baseball America as the top young prospects in Detroit’s organization entering this season.

James McCann
Only one of the Tigers’ top 10 prospects heading into the season is currently on the club’s major league roster, and that player is catcher James McCann, who is platooning with oft-injured Alex Avila behind the plate.

While McCann has fared well against left-handed pitchers, hitting .311 to go along with a .367 on-base percentage and .533 slugging percentage, he’s struggled against righties to the tune of a .265 batting average, a .299 OBP and a .387 slugging mark.

McCann, ranked as the ninth-best prospect in Detroit’s farm system before the season by Baseball America, hasn’t exactly proven that he can handle anything other than splitting time with Avila.

Devon Travis
One guy from BA’s preseason list of the Tigers’ top 10 prospects who won’t be able to make a positive impact while wearing the “Old English D” is second baseman Devon Travis, who was the organization’s top prospect entering the year. With Ian Kinsler’s presence at second base, he was deemed to have no viable role in the club’s immediate plans at the major league level. Thus, Travis was sent packing in the offseason by Dombrowski to the Toronto Blue Jays for center fielder Anthony Gose.

It’s possible to argue that the deal is a win-win right now, although Travis is hitting .305 to go along with an OBP north of .350 and an on-base plus slugging percentage greater than .800 through 54 games in a Jays uniform.

But that’s not the point.

Dombrowski traded a guy in Travis who could have been a valuable asset for the club going forward since Kinsler might be on his last legs with his declining power and subsequent sub-.400 slugging percentage. If the season ended today, it would be the lowest slugging mark he’s recorded since reaching the big leagues with the Texas Rangers in 2006. The four home runs he’s hit would also be the fewest in any of his MLB seasons.

To those paying attention, the decline of Kinsler was noticeable in the second half of last year, as he failed to slug at least .400 and recorded an on-base plus slugging below .650. Both marks would have been career-worsts for Kinsler if they would have been recorded over the course of a full season.

Therefore, the front office should have easily seen the writing on the wall regarding the regression of Kinsler. However, because Dombrowski missed it, Travis was dealt off before receiving a chance to demonstrate his ability to get it done as the double-play partner for the slick-fielding Jose Iglesias.

Steven Moya
While Travis will be in the mix for American League Rookie of the Year honors, the second-rated prospect in the Tigers’ farm system and highest ranked outfielder pre-2015, Steven Moya, has not come anywhere close to reaching the progress of Travis.

The lanky 23-year-old outfielder has battled inconsistencies at the plate all season long at Triple-A Toledo, batting .234 with a .282 OBP and an OPS below .700. Not what you would expect from your number two prospect, especially after a great year at Double-A Erie in 2014 with 35 long balls and 100-plus runs batted in. As a result of the Puerto Rican native’s season-long struggles, don’t expect him to be called up until rosters expand on September 1.

If there was ever a chance of using Moya to acquire high-impact major league talent (something Dombrowski is a master at), it’s all but over at this point.

Buck Farmer
It doesn’t get better for the Tigers as you move on to the club’s preseason no. 3 ranked prospect, Buck Farmer. Unlike Moya, Farmer has been up with the big league club, but has repeatedly struggled when given the chance to toe the rubber in the “Old English D.” He has an earned run average above 10 in four career major league starts, and has allowed at least five runs in each of his two starts this year. With his documented inefficiencies, Farmer has perhaps already proven that he’s best suited for bullpen duty. It’s not something the Detroit brass wants to accept about its top pitching prospect, and it definitely plays a role in diminishing the 24-year-old’s value as a trade chip.

It begs the question: could the Tigers attain anything of value for any of its top 10 prospects?

At face value, the answer is an absolute “no.”

Derek Hill
The club’s no. 4 prospect is 2014 first round draft pick Derek Hill is yet another youngster who has encountered struggles. The 19-year-old outfielder currently has a batting average below .250 as well as a dismal .314 slugging percentage and equally disappointing .619 OPS at West Michigan, the Tigers’ Single-A affiliate. He surely isn’t viewed as the second coming of Ken Griffey, Jr., like Cameron Maybin was after the Tigers drafted him 10th overall in 2005, and there’s valid reasoning for that. Simply put, Hill possesses less upside than Maybin once did, who rose to as high as the no. 6 prospect in baseball.

Domingo Leyba
Rounding out the preseason top five was middle infielder Domingo Leyba, who was included in the three-way deal which sent Robbie Ray to the Arizona Diamondbacks and brought Shane Greene to the Tigers.

Kevin Ziomek and Robbie Ray
Then, there’s left-handed pitcher Kevin Ziomek, who’s recorded a four-plus ERA in High-A ball at Lakeland after posting a sub-2.50 ERA in 23 starts at West Michigan in 2014. Ziomek was followed in the rankings by another southpaw in Ray, who has impressed in nine starts with the D’Backs, recording a 2.29 ERA and a fielding independent pitching mark of 2.57.

The early results of dealing Ray after one year in Motown look disastrous for Dave D and company, as Greene has struggled so badly that he’s been sent down to Triple-A Toledo, where he’s allowed more hits than innings pitched.

Hernan Perez
As is the case with Ray, the no. 8 prospect on the club’s preseason list, middle infielder Hernan Perez, is no longer a member of the ’15 Tigers. He proved to be so awful with the bat — hitting south of .100 — that the 24-year-old Venezuelan was cut after playing 22 games with the big league club.

Tyler Collins
While ninth-ranked prospect McCann has proven to be capable of holding down a spot on Detroit’s 25-man roster, the 10th-ranked prospect on BA’s preseason list, outfielder Tyler Collins, was unable to hold down a spot despite solid offensive numbers across the board. The reasoning for Collins being demoted after Victor Martinez was recalled from the disabled list was much more about Collins being blocked by incumbent corner outfielders Yoenis Cespedes and J.D. Martinez as well as center fielders Rajai Davis and Anthony Gose than his productivity at the plate. It’s a sign that Collins, a fourth outfielder-type, might not be included in the four-time reigning AL Central champion’s future plans. The fact that he’s been relegated to fourth outfielder status by club officials diminishes his value to other teams. Additionally, it further proves that the Tigers have very little to trade from their farm system.

It’s a predicament that the Tigers find themselves in largely due to Dombrowski and the club’s scouting staff’s recent inability to efficiently identify talent via the amateur draft.

And with his contract expiring at the end of the season, it’s a negative situation Dombrowski might never get the chance to resolve.