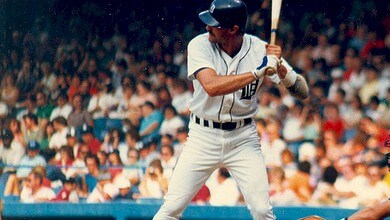 Built like a Greek statue, Kirk Gibson was one of the most talented athletes to emerge in the 1970s. One could argue that for a few years Michigan State had the greatest basketball player (Magic Johnson) and the most exciting two-sport star (Kirk Gibson) on the same campus. But initially, it appeared that Gibson chose the wrong sport.

Gibson was an All-American as a flanker for the Spartans, but there was never any doubt that he would go pro in baseball. He grew up in a family obsessed with the Tigers, and Gibby idolized Al Kaline. Detroit picked him 12th in the first round of the 1978 MLB Draft, other teams skipping over him because they were sure he would go to the NFL. But Gibby wanted to play right field in Tiger Stadium like Kaline, he wanted to win a World Series in Detroit, like Kaline.

Baseball is the most humbling of the team sports. As Michael Jordan would find out years later, hitting a baseball is enormously difficult even if you’re a world-class athlete. There were years of struggle for Gibson in the minor leagues, years of flailing at off-speed pitches, missing fastballs, and breaking bats in anger. Gibson was a perfect physical specimen, he looked like Atlas and could run like Jesse Owens, but he struggled to navigate the grind of a baseball season that alternated between failure and success, but mostly failure. His football mentality taught him to mete out punishment, and as he struggled, he became insufferable. “I knew I couldn’t go on the way I was,” Gibson said, “something had to change.”

The Tigers called Gibson to the majors in 1980 for a September cup of coffee. Sparky Anderson, as if to rub it in, inserted Gibson as a pinch-hitter against Goose Gossage for his first big league at-bat. With his family in the stands at Tiger Stadium, Gibson looked foolish against the Goose, striking out on three pitches. He would file that one away.

Gibson went to a sports psychologist and learned a technique called “visualization.” It’s pretty well-known now that imagery can help athletes achieve success, but at the time, in the early 1980s, it was unusual. Gibson never did anything halfway, and confronted with the sober fact that his attitude was costing him a chance to play every day, he performed the lessons the psychologist prescribed for him. The year before he saw the specialist, Gibson hit .227 and led the league in dugout tirades. He let fans and the media get under his skin. But after he started using visualization, his performance steadied. In 1984 he earned a spot as Sparky’s #3 hitter and batted .282 with 27 homers. His wheels were in motion too, as he stole 29 bases. That kicked off a five-year stretch where he averaged 27 homers and 30 stolen bases. In Game Five of the 1984 World Series, Gibson exacted revenge, hitting a soaring home run off Gossage in the eighth inning to seal the title for his hometown team at Tiger Stadium. Watching from the stands was a beaming Al Kaline.

For all his muscles and bravado, Gibby was a cerebral player. He worked hard to perfect his baserunning, counting and timing the steps between each base, training himself to hit the bag at the optimal spot. He made himself a better outfielder and learned to get rid of the ball quickly to make up for a below-average arm.

The visualization technique played a role famously again in the 1988 World Series when he pinch-hit in the ninth inning at Dodger Stadium against a new relief ace, Dennis Eckersley. Remembering the scouting report that said Eck liked to throw a backdoor slider to lefties with two strikes, Gibson saw himself hitting that pitch into the right field stands. And that’s precisely what he did, winning the game and providing one of the most thrilling moments in baseball history.

One reply on “How Kirk Gibson saved his baseball career“