How Lou Whitaker’s Forgetfulness Landed Him in The Smithsonian

During his long career with the Detroit Tigers, Lou Whitaker was known for several things: his quiet unassuming nature, his powerful throwing arm, his short quick stroke that often lined balls into the right field porch of Tiger Stadium, his pigeon-toed swagger to the plate, the nimble manner in which he handled grounders in the hole, and his partnership with shortstop Alan Trammell as one of baseball’s greatest double play duos.

But around the Detroit clubhouse, Whitaker was also known for being, well, somewhat of an airhead. Frequently he would make gaffes or do things that caused those around him to scratch their heads. Harmless things, but curious nonetheless. His sense of humor was occasionally misinterpreted by some, too. Once when he was asked by a Detroit newspaper reporter who his idol was, Whitaker replied, “myself.” He also told the same reporter that his favorite color was green because “it’s the color of money.”

Later in his career, during the labor problems that led to the cancellation of the 1994 World Series, Whitaker arrived at a union meeting in a stretch limousine, a choice that wasn’t ignored by fans who thought millionaire ballplayers were a little spoiled to be on strike over money.

Teammate Tom Brookens acknowledged that Whitaker was at times an “interesting” teammate. “Lou never wanted to know what the other teams signs were, he [preferred] to play using his own instincts, [even] when it would have helped him on the base paths or in the field.”

In 1985 “Sweet Lou” was elected to start at second base for the American League in the All-Star Game. A devoted family man, Whitaker preferred to spend the break at home with his wife and two young daughters, but reported to Minneapolis for the game. When he arrived he realized that he’d made an embarrassing mistake.

“I left my bag in the backseat of my Mercedes, isn’t that a shame?” Whitaker announced on the day of the game.

With only hours to go, Whitaker and the clubhouse boys for the Twins were forced to scramble. Lou had packed his socks and uniform pants in his suitcase with his clothes, but he didn’t have a cap, helmet, glove, spikes, or batting gloves.

His All-Star teammates stepped up to help: Cleveland pitcher Bert Blyleven let Whitaker wear his helmet; Baltimore’s Cal Ripken Jr. had an extra glove; Damaso Garcia of the Blue Jays came through with batting gloves. A clubhouse attendant bought an adjustable Tiger cap and a jersey from a souvenir stand at the Metrodome. The problem was that it was a generic Tigers jersey – there was no number or name on the back. A clubhouse attendant took a black marker and wrote in Sweet Lou’s #1 using a stencil. 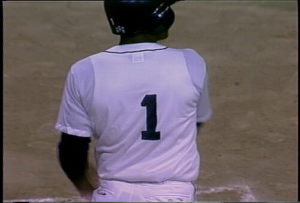 With his makeshift uniform and gear, Whitaker was ready for the Midsummer Classic. He started at second and went 0-for-2, flying to right in each of his at-bats. He handled his fielding plays perfectly and was removed from the game by All-Star manager Sparky Anderson in the sixth inning.

And what happened to the jersey that Sweet Lou wore in that ’85 All-Star Game? The Smithsonian in Washington D.C. was so intrigued by his case of forgetfullness that they requested the garment. Whitaker obliged, and the jersey that he wore only once is still in their collection today.