How the Red Wings assembled the Russian Five 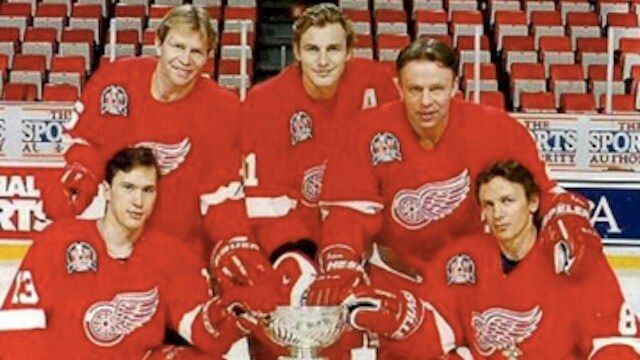 They were the greatest unit to ever skate together in the National Hockey League. They brought a brand of hockey to the league that had never been seen before, that quite frankly baffled opposing teams. They helped galvanize the Detroit Red Wings and lead them to back-to-back titles in the late 1990s. The Russian Five were a legendary quintet the likes of which we will never see again.

Even though they came from the same country where they were each taught how to play ice hockey the same way, they didn’t come to Detroit as a cohesive unit. Instead, the Red Wing organization slowly accumulated the five, eventually piecing them together thanks to the genius of their Hall of Fame head coach Scotty Bowman.

To understand how the Russian Five were formed, you have to understand a bit about how hockey used to work on a global scale. From the 1950s into the 1980s, the Soviet Union dominated international hockey. Seven times in nine Winter Olympic Games, in 1956, 1964, 1968, 1972, 1976, 1984, and again in 1988, the USSR skated off with the gold medal. Their roster was filled with the most talented hockey players in the world, many of them also members of the Red Army. Their job was to play hockey year-round for the giant Communist nation that was embroiled in a Cold War with the United States. The Russian team was dispatched to international competitions to show off the USSR’s athletic superiority.

But by the late 1970s several of their players were asking for the opportunity to play in the NHL. Most experts believed that had the USSR’s top team been in the NHL they would have easily won the Stanley Cup. But leaders in the USSR refused. Eventually, as “Glasnost” brought a thawing in the Cold War, a few Russian players were allowed to enter the NHL, under one condition: they would still return to the USSR to skate for their home country in international competition.

Even though Russian players had been denied the opportunity to go into the NHL, teams in North America had been drafting them for years, securing their rights so they’d have those talented skaters once they were freed to travel to the west. Defenceman Viacheslav Fetisov was one of those players, having been drafted by the Canadiens in 1978 and the New Jersey Devils in 1983. But Fetisov wasn’t able to secure his right to go to America until he was 31 years old, in 1989. That was the year the floodgates opened as several Russian players entered the NHL. Fetisov debuted with the New Jersey Devils in 1989–90 and recorded eight goals and 42 points, both NHL career-highs. It was clear right away that Fetisov was a top-notch defender fully capable of dominating in the NHL.

Detroit kept a close eye on international players, and as a result they selected Vladimir Konstantinov 221st overall in the 1989 NHL Entry Draft, after the defenceman impressed a Red Wings scout at the 1987 World Junior Championships, where a brawl broke out in the USSR/Canada game. “He was the only one of the Russians who fought back,” the Detroit scout said. Known as “Vlad the Impaler” for his hardnosed play, Konstantinov’s aggressive style of play quickly earned him the nickname “Vladinator” and the respect of his Detroit teammates.

High-speed center Sergei Fedorov was also drafted by the Red Wings in the 1989 NHL Entry Draft, in the fourth round, 74th overall. Unfortunately, the Soviets were not letting Fedorov, one of their prized young players, leave. In 1990, while CSKA Moscow was in Portland for the Goodwill Games, Fedorov quietly slipped out of his hotel room and onto an airplane bound for Detroit, thus becoming one of multiple future NHL stars to have defected from the Soviet Union to play in the League.

Also in 1989, Igor Larionov, a heralded center who had won a gold medal with the Russians at the Olympics in 1984 and 1988, entered the NHL with the Vancouver Canucks. Larionov had been one of the most vocal opponents to Russia’s iron-fisted control of their hockey players. For years he had wanted to play in the NHL and he was a good friend of Fetisov.

The same year that Fedorov defected to Detroit, the Red Wings picked 18-year old Slava Kozlov 45th overall in the 1990 NHL Entry Draft. Like Fedorov, Kozlov was a center, known for his puck-handling skills.

By 1992, three of the Russians: defender Konstantinov, and centers Fedorov and Kozlov, were on Detroit’s big league roster wearing Red Wings’ sweaters. A few timely trades would bring the final two pieces to Motown.

On April 3, 1995, Bowman traded a draft pick to New Jersey for Fetisov. That spring the Red Wings rolled through the playoffs, with Kozlov scoring the winning goal in overtime against the Blackhawks in the Conference Finals to send Detroit to the Stanley Cup Finals. But Bowman’s team was upset by the Devils in a four-game sweep. Entering the next season, Bowman knew he needed some more firepower to get his team the title they thirsted for.

Bowman was aware that in Russia, teams frequently used entire units together, playing three on the line and two defenceman together. It was something that was very unusual in the NHL. But in Russia, where teamwork and sharing the puck were stressed more than in the wide open NHL, puck control and unit-play was favored. The Detorit head coach and general manager had the idea to do the same thing. He had Fedrorov (one of the best scorers in the league by this time), Kozlov (who had been converted into a wing player), and the two defenders in Konstantinov and Fetisov. Now he needed a fifth Russian.

On October 24, 1995, Bowman got his man when he traded for Larionov. The cost was not cheap: Detroit sent veteran right wing Ray Sheppard to San Jose for Igor. Regardless of the price, Bowman had his five Russians and he was ready to set his plan in motion.

“I knew it would work,” Bowman recalled later. “The one worry I had was [that] the league would learn how to play against them, so I decided to play them together at first only a few times a game. Some games I waited until the third period to put the unit in.”

Almost immediately, the Russian Five made an impact. Their puck handling, skating, and defense were dominating, and their intuitive ability to play together as a unit had never been seen in the league. They almost seemed to be like a small flock of birds flying in unison, when one needed to take the lead, he effortlessly flitted where he needed to be. The unit made plays that at times made jaws drop. By the mid-1990s, Fedorov was, in the words of Wayne Gretzky, “the best player in the NHL.” Teammate Steve Yzerman went one step further, calling Fedorov the “best player on the planet.”

With Larionov at center, Kozlov and Fedorov on his wings, and the bruisers Vlad and Slava on defence, the Red Wings won the Stanley Cup in their second season together.