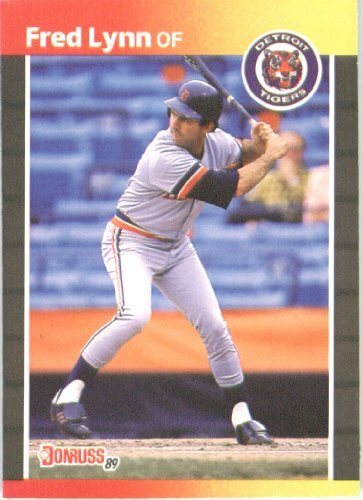 Fred Lynn played parts of two seasons for the Detroit Tigers. He hit 18 home runs for the team.

When he arrived in Boston to be the starting center fielder for the Red Sox in 1975, Fred Lynn found the major leagues easy. Why? He’d been preparing his entire life for competition against the best.

“When I was coming up in southern California, like 15 years old, I played in a summer league sponsored by the Yankees,” Lynn said. “I was starting in center and I was playing against guys who were 21, 22, 23 years old. I always did that. Later, when I was in the minors the pitchers were younger or the same age as me, they were wild. The places we stayed were atrocious, the hotels, the bus trips. When I got to Boston everything was first class, the pitchers threw strikes, I just found it was easy.”

Lynn won the Rookie of the Year Award and Most Valuable Player Award in 1975, the first man to accomplish that double trophy haul. He was an instant superstar. In a game against the Tigers in Detroit in June, Lynn hit three home runs and drove in ten runs. People thought he was Superman. Chicks dug him and guys wanted to be him. He made diving catches, he threw runners out on spectacular plays, at times he carried the Red Sox. He was compared to Joe DiMaggio.

“I can’t believe what I saw out there,” Detroit manager Ralph Houk said on the night that Lynn hit three homers at The Corner. “I saw a superstar and he’s barely old enough to take a drink.”

Had you polled Red Sox fans in 1975 asking them which of their two star outfielders, Lynn or Jim Rice, would be a Hall of Famer, Freddie would have won in a landslide. Even four years later, with Rice having won his own MVP in 1978, most folks would have picked Lynn as the future Hall of Famer. He had a monster season in 1979 when he was bigger and stronger and still playing a great center field. Rice was a powerful hitter but he was already being used as a DH quite a bit. He was a one-way player.

But Jim Rice has a plaque in Cooperstown and Fred Lynn does not. Why? Lynn got hurt every season after he was 26 years old. Only once in his last eleven seasons did he get as many as 500 at-bats. He won the batting title in 1979 and probably should have won another MVP Award, but the balance of his career spent with one foot on the diamond and the other on the disabled list.

“After I won the batting title I thought I could win it again, maybe every year,” Lynn said. “When you’re young, you can’t imagine not being young and healthy. But something happened every year.”

Fred ran into an outfield wall one year, then he broke his elbow when he collided with a teammate in the outfield. He pulled a hamstring here and stubbed a toe there. He got bigger, added more muscle through weight training, but he seemed intent on pulling all of those new muscle. Then he left the Red Sox and their cozy ballpark.

“I loved hitting in Fenway, who wouldn’t? But when I left the team, I never felt that comfortable again in any of my [home] parks,” Lynn said years later.

Lynn batted .347 with a .601 slugging percentage in Boston. Had Lynn been able to hit in Fenway for his entire 17-year career, he probably hits .300 and he might have reached 400 home runs, what with the Pesky Pole down there as a target. But he did not fare nearly as well in Anaheim, Baltimore, or in his brief stint in Detroit.

Lynn never drove in as many as 90 runs after the age of 26, never again hit 30 home runs, and his batting average started to slip, first to the .290s then the .280s, and so on. Rice ended up with about 500 more hits, 80 more homers, 400 more RBIs, 150 more runs scored, his career average hung right under the .300 mark. Of course, Rice never left Boston, while Lynn was traded after a contract snafu.

After 1979 when he hit those shocking 39 homers, Lynn never hit more than 25 in a season again. That wasn’t because of anything strange, he was simply injured every year. Consequently he settled in for 21, 22, 23, or 25 homers every season for seven straight years in his 30s. He kept making All-Star teams because he was a popular player: he made the Midsummer Classic every year from 1975 to 1983. In the 1983 game at Comiskey Park, he belted the first grand slam in All-Star Game history. It should have been a big highlight in a Hall of Fame career, but instead it’s a footnote.

Lynn almost didn’t become a Tiger. The team was trying to add punch to their lineup at the August trade deadline in 1988 when they entered negotiations with the Orioles for Lynn. Baltimore wanted two prospects, but general manager Bill Lajoie wasn’t sure. The Tigers were neck-and-neck with the Red Sox in the AL East, trying to win a second straight division title. Lynn’s lefthanded bat was just what Sparky Anderson craved. As the trade deadline of midnight August 31 approached, Lajoie still hadn’t decided if he would surrender two players. Finally, only moments before the deadline, Lajoir agreed to send minor league catcher Chris Hoiles and a player to be named later to the Orioles. But unfortunately the transaction was not entered to the league office in time. Only an appeal by both teams pushed the trade through, and Lynn scrambled to join the Tigers.

Down the stretch in 1988, Lynn hit seven home runs for the Tigers and became a popular player in the Motor City. Sparky wrote his name in the lineup as a designated hitter, left fielder, heck even back in center field a few times. Three of his home runs were game winners, and though the Tigers ended up losing the division by one game, his efforts were appreciated. The Tigers brought him back in 1989 and Lynn smacked 11 home runs as a lefthanded designated hitter.

Lynn’s career ended in 1990 when he fizzled out practically unnoticed with the Padres. At least he was back in SoCal, where his perpetual tan was fitting. Lynn looked like a Hall of Famer, and his 306 homers were noteworthy, but his trek to Cooperstown was derailed. He ended up in the mythical Hall of Very Good instead.