In Cameron Maybin, Avila gets his man back 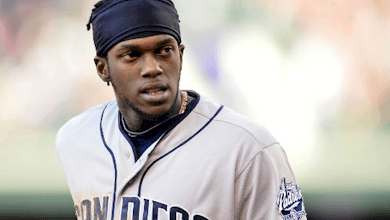 Cameron Maybin returns to the team that drafted him into professional baseball.

The Detroit Tigers’ outfield will look a little different next year, with the acquisition of Cameron Maybin. He is expected to essentially take the place of Rajai Davis, platooning in center field with Anthony Gose. Maybin, a right-handed hitter, is seven years younger than Davis, who is clearly on the down side of his career.

Maybin is still a fleet runner, but is considered only an average or plus defender. He was once considered a five-tool prospect, but those days are long gone. Over the course of his nine-year career, Maybin’s weaknesses have been exposed, and he hasn’t been able to make adjustments, which has hurt his progress.

While he has raw power, he remains susceptible to breaking pitches away, resulting in his high whiff totals (He has averaged 132 strikeouts over a 162-game season). His inability to draw walks hurts his on-base percentage and his value as a leadoff hitter. With Atlanta in 2015, he hit just about anywhere in the lineup early in the season, before settling into the two-spot.

He is a good gap hitter, and he should be able to take advantage of Comerica Park’s vast expanse. Of course, Maybin played for several seasons at Petco Park in San Diego, which also has a big outfield, and he had mixed results. But the ball simply does not carry in San Diego, so things could be different here.

Maybin doesn’t always get a good read on fly balls, but he has been able to more or less compensate for this with his speed. He’s got a good arm, but his throws are not always on the mark.

Maybin was the Tigers’ first pick in 2005 (tenth overall). For a while, all we heard was Cameron Maybin this, and Cameron Maybin that. He was going to be the next Andre Dawson, the next Roberto Clemente. He was supposed to be the best Tiger prospect to come along in generations. Or so we were told.

When Detroit called him up from Double-A Erie in September of 2007, a big deal was made out of his first game in the big leagues. It was at Yankee Stadium. He went 0-for-4 that day. But the next afternoon, facing Roger Clemens before nearly 55,000 people and a national television audience, Maybin singled for his first major-league hit. A few innings later, facing Clemens again, he stroked a home run to dead center field. There was the feeling that it was the start of something special.

It was, but not the way we figured. That winter, the Tigers dealt Maybin to the Florida Marlins, along with five other players, including another blue-chip in Andrew Miller. Detroit, of course, landed Miguel Cabrera (and Dontrelle Willis), and the rest is history.

I find it intriguing that it didn’t take Al Avila long to bring Maybin back to Detroit. Avila, the current Tiger GM, was the assistant to Dave Dombrowski during the time that Maybin was drafted, as well as when he was traded away. During the press conference announcing the Cabrera deal, Dombrowski brought up the issue of losing Maybin and Miller. I’ll never forget one of his comments: “Prospects are just that: Prospects.”

That philosophy pretty much sums up Dombrowski’s tenure in Detroit. And while the trade obviously was historically great for the Tigers, maybe Avila never wanted to relinquish Maybin. Maybe in the ensuing years, Avila always wanted to re-acquire the outfielder, and maybe Dombrowski didn’t.

Maybin, of course, is no longer a prospect, but he may not have reached his peak as a player, which should be good news to Tiger fans. If he can come anywhere close to the player the Tigers thought he was going to be when they drafted him years ago, this deal will turn out to be a good one. But that is a big “If.”