Iorg proof that some top prospects don’t pan out 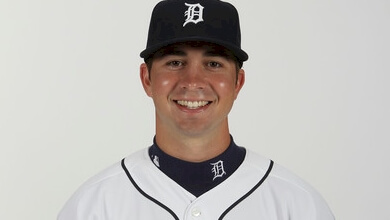 Cale Iorg was once a highly regarded prospect in the Detroit organization.

Cale Iorg was once considered one of the top prospects in the Tigers’ farm system.

He was even, at one point, touted by David Chadd, Detroit’s former vice president of amateur scouting and the club’s newly appointed assistant general manager, as having “five tools.”

At the end of the 2008 season, former Tigers president and GM Dave Dombrowski took the praise a step further by saying that Iorg was going to be an All-Star one day.

Now, Iorg, who was ranked as high as the no. 2 prospect in the club’s farm system after the 2007 season, is out of baseball at 29 years old.

What caused the Toronto native’s path to the big leagues to take a turn for the worse?

First things first, Iorg, a devout Mormon, was drafted by the Tigers in the sixth round of the ‘07 MLB draft after being away from the game for two years due to a missionary trip that took him to Lisbon, Portugal.

It was hoped that he would not come back rusty despite the fact that he had not played in a game of organized baseball in those two years that he spent in Portugal.

Maybe the Tigers thought his lineage of major league talent, which consists of his father Garth who played with the Toronto Blue Jays in 70 or more games from 1980-1987 and his uncle Dane, who was a first-round pick of the Philadelphia Phillies in 1971 and a longtime member of the St. Louis Cardinals, would allow him to get back into a groove at the plate and in the field in a quick fashion.

However, his rich major league bloodline did him no good, as he struggled in his return to baseball, hitting a combined .241 in three games with the Gulf Coast League Tigers, Detroit’s rookie level minor league affiliate, and in five games with the club’s High-A affiliate, the Lakeland Flying Tigers.

Undoubtedly, it’s a small sample size to look at, when judging how Iorg transitioned back into baseball.

But the results at the plate never seemed to improve, outside of ‘08 when he played in 99 games at Lakeland and batted .251, which is the highest his batting average rose to while in Detroit’s minor league system.

Iorg never got into the swing of things offensively — no pun intended — with his batting average failing to rise above the “Mendoza Line” in his last three years as a minor leaguer, the last of which was spent as a member of the Baltimore Orioles’ Double-A affiliate, the Bowie Baysox.

His defense also never stood out as much as it should have after he was rated as the infielder with the best arm in the Tigers’ farm system from 2008-09 and as the best defensive infielder in the club’s system following the 2010 season.

In fact, he made at least 18 errors a season while manning shortstop from 2008-11. Additionally, he made three errors in only seven games and 29 chances at shortstop during his lone campaign with Bowie, equating to a dismal fielding percentage of .897.

To put it kindly, Iorg simply was not good enough with the glove to make up for the lack of productivity he had with the bat.

Subsequently, he never reached the high ceiling that was set for him by Dombrowski and company after they gave him a signing bonus just shy of $1.5 million to coerce him to sign with the Tigers in ‘07.

It’s something the club learned the hard way about Iorg over the course of the University of Alabama product’s six years in the organization.