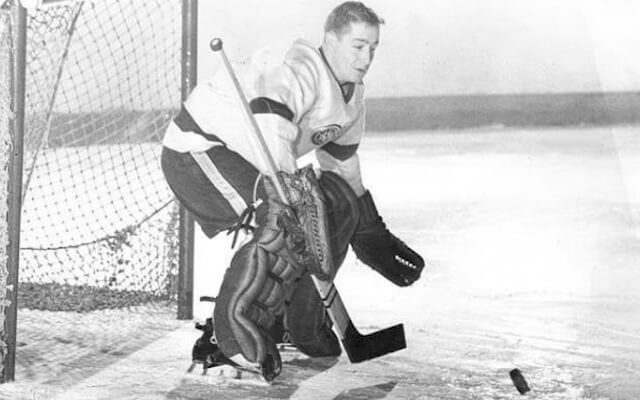 Nicknamed “Mr. Goalie,” Glenn Hall was the first goaltender to make effective use of the butterfly style of goalkeeping.

Not to take away anything from Terry Sawchuk, the fabled Hall-of-Fame netminder whose No. 1 hangs from the rafters at The Joe, but it was his contemporary and one-time teammate, Glenn Hall, who was known as “Mr. Goalie” during the 1950s and ‘60s.

“Hall was special because he cared so much about playing,” said Scotty Bowman, who coached Hall on the expansion St. Louis Blues in the late 1960s. “He was the hardest worker of all. The players loved him because he took all the responsibility on himself.”

Over a span of 18 NHL seasons in Detroit, Chicago, and St. Louis, the slim six-footer from Humboldt, Saskatoon was between the pipes for 906 regular-season contests. He won 407 of them, including 84 shutouts, and compiled a sterling 2.51 goals-against average. Three times he won or shared the Vezina Trophy for allowing the fewest goals. He was just as formidable in postseason play, racking up a 2.79 average in 115 games.

What makes Hall’s record all the more remarkable is the fact that he had a propensity for getting physically ill before games. In fact, the fear of facing flying rubber night after night became so great, the bare-faced goalie regularly “retired” to his farm and avoided training camp. When anxious employers tried to coax their star goaltender into reporting, he would respond that he was busy painting his barn.

“It was the best-painted little red barn you’ve ever seen,” Hall joked in retirement.

Hall came up through the Detroit organization—Windsor, Indianapolis, and Edmonton—before playing six games as a rookie during the 1952-53 campaign. Dislodging the Wings’ brilliant incumbent, Terry Sawchuk, seemed an impossible task.

Then, in 1955, Detroit general manager Jack Adams shocked the hockey world by trading Sawchuk—who had just steered the Wings to their fourth Stanley Cup in six years—to Boston. Hall was promoted to the big time.

He responded with two sold seasons while playing every minute of 140 regular-season and 17 postseason games. He was awarded the Calder Trophy as the league’s top rookie in 1956. Despite a courageous performance during the 1957 semifinals, including playing with a smashed mouth that required 23 stitches, Hall was blamed for the Wings’ upset loss to Boston. Adams dealt him to Chicago. Four years later, Hall extracted revenge by backstopping the Blackhawks to their first Cup win since 1938. The victims were the Red Wings.

Hall, a first-team All-Star a record seven times, played 10 seasons in Chicago before rounding out his career with four seasons in St. Louis. He played in three consecutive Cup finals with the Blues—all unsuccessful runs at the Cup—but nobody blamed the goaltending. In fact, Hall’s brilliant work in the ’68 finals against Montreal earned him the Conn Smythe Trophy as the playoffs’ most valuable player. Quite a feat for a goalie, especially one whose team was swept four straight.

That performance, however, doesn’t rank as Hall’s greatest achievement. Battling butterflies before every game, he nonetheless put together one of the most amazing playing streaks in the history of professional sports. Between 1955—his first full season with Detroit—and 1962, Hall played 502 consecutive games in the net. When the playoffs are included, the numbers grow to 552 consecutive games. Hockey observers agree that, because of the length of today’s schedule and the widespread use of back-up goalies, Hall’s record will never be approached.

Hockey observers also agree that the Hall of Famer, inducted in 1975, richly deserved his plaque. He’s only one of only a handful of Blackhawks to have his number retired. Not bad for someone who, night after night, was never quite sure he wanted to strap on his pads and waddle out to the crease again.

“I may have said I hated the game,” he said, “but that was after a loss. After a win, you love it all over again.”