Is this the end of an era for the Tigers? 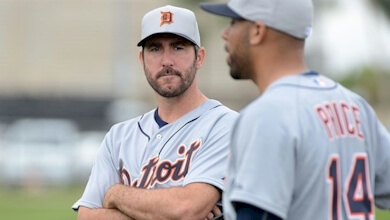 Justin Verlander and David Price were supposed to form a great top-of-rotation duo for the Detroit Tigers in 2015.

Well, that wasn’t how the Tigers wanted to start the weekend.

Baseball is a funny game. Who would have bet that Justin Verlander and Rick Porcello, the old former teammates, would both have put in such splendid performances on Friday in the opener of this series between the Bengals and Bosox?

But in the end, it was another loss for the old English “D.”

The Tigers, according to reports, are going to wait until after this three-game series at Fenway Park to determine whether they will be buyers or sellers.

If nothing else, that makes this Boston trip a kind of make-or-break weekend for Detroit.

But really, what do Dave Dombrowski and Mike Ilitch hope to learn about this team that they don’t already know?

The fan base (at least that portion the calls in to sports talk radio) is growing more frustrated with each loss. The general consensus is that the Tigers are just not good enough. Are three games in Beantown going to alter that assessment? (By the way, if Kirk Gibson doesn’t yet know why they call it Beantown, I really don’t know what to say.)

The fun run of division championships appears to finally be over. In the long term, it may be better for Detroit to sell. Get something of quality for David Price and Yoenis Cespedes, with a view to making the team better for next year.

But some Tiger fans don’t want to hear about next year. They would rather the team go for it. Anything is possible, if not likely. Look at last year’s Royals, they say, who were a wild card team and went to the World Series.

Yes, it happens sometimes. But does an organization really want to risk its future in the hope that it can somehow qualify for a one-and-done wild-card playoff game?

The Tigers bolted out of the gate quickly this year, which probably put some unrealistic expectations in a lot of people’s heads. Following a win over the Yankees on April 20, Detroit was in first place in the AL Central, with a record of 11-2. Since then, the Tigers have played at a pathetic 36-47 clip. Only the Red Sox, at 35-49, have been worse in the AL.

Strangely enough, Boston was also in first place, in the AL East, on April 20, with eight wins and five losses. And now here they are playing each other in late July, both seemingly headed nowhere.

These are unchartered waters for the Tigers and their fans.

A heap of criticism has been directed at manager Brad Ausmus, much of it deserved. But Dombrowski has also gotten his share of blame for the flawed roster that Ausmus has been given.

Dombrowski is a shrewd general manager, one of the best in the game today. He put Detroit baseball back on the map after it had been a symbol of irrelevancy, both locally and nationally, for a long, long time. He resume has some weak points, however, particularly in regards to his bullpen acquisitions in recent years.

But for Tiger fans who welcome his departure, I would say be careful what you which for. A GM who is good at his job is a valuable commodity. Just ask anybody in Detroit who lived through the Randy Smith Era.

These three games in Boston may not signify a whole lot in the standings. But baseball in Detroit has reached a tipping point.

If Dombrowski and Ilitch are encouraged by the events that take place this weekend, and they decide to be buyers, we may be primed for one more exciting run in October.

If the Tigers go out and look bad, well…

In Justin Verlander, Max Scherzer, and David Price, this team has had three of the finest starting pitchers in our time. But Verlander is a shadow of his former self, Scherzer is gone, and Price may be very soon.

In Miguel Cabrera, the Tigers have the greatest hitter to come along in generations. He has a few more years left in his prime, but then what?

Baseball has been wonderful in the Motor City for nearly a decade. But despite all the names, all the MVP and Cy Young Awards, all the division titles and the World Series appearances, this organization is still searching for that elusive World Championship.

Has the window of opportunity finally slammed shut?

Are we reaching the end of an era?