Isiah loved to shine at the All-Star Game 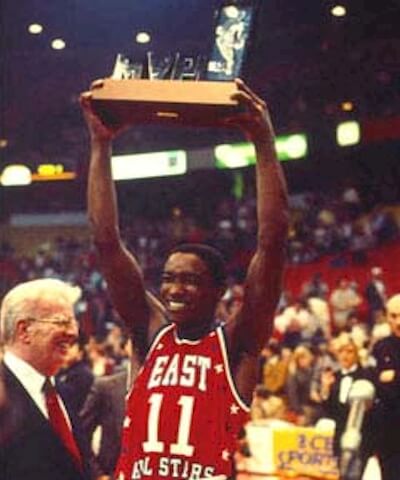 Of all the all-star games in pro sports, none is “cooler” than the one played in the National Basketball Association. When the finest players in the NBA gather each February for their All-Star Game, there’s guaranteed to be plenty of smooth plays, gravity-defying dunks, and oh-so-cool passes. Basketball’s “best of the best” love to show off on the hardwood.

Few players rose to the occasion like Isiah Thomas in the annual All-Star Game. In his Hall of Fame career, the diminutive Detroit point guard played in eleven NBA All-Star Games, starting at point guard in ten of them. His performance in those games ranks among the best in basketball history. Isiah really knew how to show off in big games.

How popular was Isiah Thomas when he entered “The Association?” In his rookie year, Thomas was selected to the starting lineup for the game in New Jersey, getting more votes than everyone except Magic Johnson. The twenty-year old found himself as the starting point guard for the Eastern Conference All-Stars, dressing in the locker room alongside Nate “Tiny” Archibald, “Dr. J” Julius Erving, Larry Bird, and even former Pistons’ star Bob Lanier. In the game, Isiah was far from starstruck — he dished out four assists and scored twelve points as his team squeaked out a 120-118 victory.

Two years later it was Isiah’s show in Denver. The little guard played like he was ten feet tall, scoring 21 points, including several key buckets down the stretch as the East erased a 14 point halftime deficit to force overtime. As he often did, Isiah liked to share — he had 15 assists as he selflessly passed the ball to his teammates in a big win, 154-145. For his efforts, Isiah was awarded the All-Star Game MVP Award. He joined Lanier as the only Pistons to win the honor.

The only thing Isiah seemed to do wrong at the 1984 NBA All-Star Game was leave his winner’s share check ($2,000) in his locker at McNichols Arena in Denver. A thoughtful trainer sent it ahead to him later.

In 1985 Isiah had a new back court partner on the Eastern team: Michael Jordan, the exciting rookie from the Chicago Bulls. The thrilling playoff battles between these two were years away, but Isiah had already placed a target on young Jordan. According to some reports, Isiah decided to “freeze out” the rookie, choosing to pass the ball to the likes of Bird, Dr. J, and center Moses Malone. Jordan had just nine field goal attempts in the game, the fewest of any of the starters for the Eastern Conference. Isiah led his team with 22 points, but the West came out on top, 140-129. even though his team lost that game, Isiah made history before the ’85 game was even played when he became the first player in NBA history to be voted a starter for four consecutive All-Star Games.

The next year in the All-Star Game, Jordan couldn’t exact any revenge, even if he had wanted to, because he was injured and unable to play in the game. Instead, Isiah took over in Dallas scoring 30 points with ten assists and five steals. He was all over the court while he played 36 minutes in the Eastern Conference’s 139-132 victory. He easily won his second All-Star Game MVP Award, joining a select group to win it multiple times.

“He sort of put us on his shoulders and carried us along [for a while],” said Eastern Conference coach K.C. Jones from the Boston Celtics.

Two years later in 1988, the game took on extra meaning to Isiah, as it was played in Chicago, his hometown. But by this time of course, basketball fans in that city were in love with Jordan, and Isiah was hardly a memory to most of them. After all, he was the leader of the hated “Bad Boys,” the prime nemesis of Air Jordan and the Bulls. In the game, won by the East, Isiah took a backseat, as the weekend was really all about Jordan, who also won the slam dunk competition with high-flying acrobatics. The Bulls’ star scored 40 points, but Isiah deserves some credit for that performance — the Detroit point guard passed out 15 assists, six of them going to Jordan. Isiah scored just eight points in the game, his lowest All-Star Game output.

The 1989 NBA All-Star Game was played in Houston, and as he had in ’86 the last time the contest had been hosted in Texas, Isiah was on fire. He scored 19 points, the second highest total on the team, adding 14 assists and four steals. Had the East been able to win the game, Isiah probably would have garnered a lot of support for a third MVP award, but the Western Conference prevailed, 143-134. Still, Isiah made several great plays as he poured in points in the second half trying to bring his team back from a 28-point halftime hole.

Isiah helped the East to a win in 1990 at the All-Star Game in Miami, scoring 15 points, nine assists, and three steals. he even added four rebounds in 27 minutes on the floor. Chuck Daly used his own trio of Thomas, Joe Dumars, and Dennis Rodman together at times, helping the Eastern Conference team to a 130113 win.

One of the NBA’s greatest moments came at the 1992 All-Star Game in Orlando when Lakers’ star Magic Johnson returned to the game after retiring due to his HIV diagnosis. In the game, Magic went one-on-one with Michael Jordan and Isiah Thomas late in the game. The outcome of the game was practically inconsequential, but Isiah managed 15 points in the contest, trying to keep up with his old buddy Magic, who was named MVP.

The final All-Star hurrah for Isiah came in 1993 when he was voted a started for the tenth and final time. Though he played 32 minutes, Isiah got only seven shots off and scored just eight points. He dished out four assists, giving him 97 in All-Star competition for his career. The West ended up winning the game by three points, 135-132.

Though he wouldn’t appear in any more All-Star Games (Isiah’s career ended prematurely due to a leg injury during the 1993-94 season), Thomas was one of the best All-Star performers in league history. In eleven games he averaged 16.8 points, 8.8 assists, 2.8 steals, and 2.5 rebounds in 29 minutes per game.