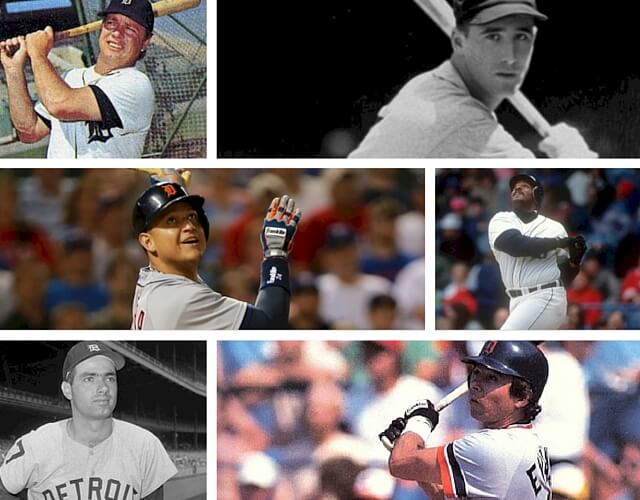 If I had told you in April of 2014 that J.D. Martinez, a 26-year old castoff picked up by Detroit off the waiver wire, would hit 35+ homers in a season for the Tigers, what would you have said? You would have checked my temperature, right?

Yet here we are with only a few games left in the 2015 season and Julio Daniel Martinez is closing in on a huge milestone: 40 homers. Entering Wednesday’s series finale against the Rangers in Arlington, Texas, Martinez has 38 home runs. Including tonight’s game, J.D. and the Tigers have four games left on their schedule. A game that was rained out earlier this year against the Indians will not be replayed unless it has a bearing in the playoff chase. Since the Tigers have been eliminated and the Tribe’s chances are on life support, that seems unlikely. As a result, the Tigers will end the ’15 season with 161 games on their ledger.

Should J.D. swat two more homers he would become only the seventh Tiger to reach the 40-homer mark. That’s pretty surprising considering the long history of great hitters in franchise history. That makes what Martinez is doing even more impressive — it’s a rare feat by a Detroit batter.

The previous six Tigers to reach 40 homers did it eleven times. Here’s a look at those Detroit sluggers.

Rocky Colavito (45 in ’61)
The Rock hit 27 of his homers on the road. He and Cash are the only teammates to hit 40-homers with Detroit in the same season.

Darrell Evans (40 in ’85)
The second lefthanded hitter in this group, on September 1st Evans had 29 homers but he went on a tear over the last four weeks of the season. In the last few days he hit three homers off Doyle Alexander and Dave Stieb of the Blue Jays to reach the 40-mark. At age 38, Evans was the oldest man to reach 40 as a Tiger and the second oldest player in baseball history at that time. “Howdy Doody” became the oldest man to lead the AL in home runs.

Cecil Fielder (51 in ’90, 44 in ’91)
Prior to J.D., Fielder has to be the most unlikely Detroit hitter to reach 40 homers. In retrospect it’s easy to see Big Daddy as a Big Slugger, but at the time he signed an unrestricted free agent deal with the Tigers prior to the 1990 season, Fielder was seen as a failed big leaguer who couldn’t keep the weight off. He immediately established himself as a monster slugger, leading the AL in homers in each of his first two seasons as a Tiger. His 95 homers in consecutive seasons trails only Greenberg’s 98 in 1937-38 for most by a Tiger.

Miguel Cabrera (44 in ’12, 44 in ’13)
The big guy is the third Tiger to reach 40 homers more than once. His 44 in 2012 were part of his triple crown season. Incredibly, in 2013 he had 43 homers on September 1st but only hit one more as he slumped down the stretch hampered by a leg injury. He still won his second straight MVP award.

One reply on “J.D. Martinez trying to join elite group of Tigers sluggers“