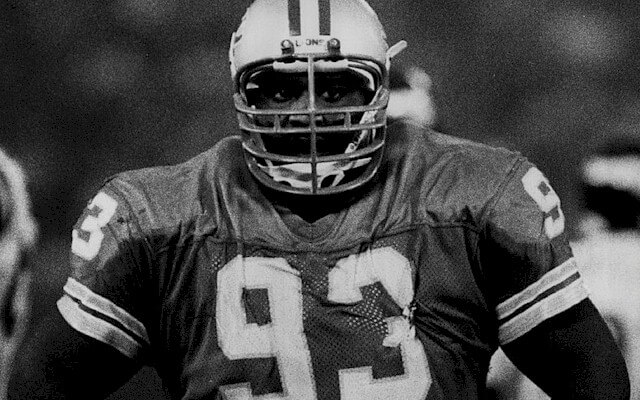 Nose tackle Jerry Ball was a three-rime Pro Bowler for the Detroit Lions.

The last time the Detroit Lions had a great team, they had Barry Sanders and a balanced offense.

But it was the defense that propelled the Lions to the division title and the NFC championship game in 1991.

Prior to the NFC championship game, a 41-10 defeat at the hands of the eventual Super Bowl champion Washington Redskins, the Lions had allowed 20 points in just one of their final seven games.

That 20 was in a 34-20 victory over the New York Jets in Week 15. Detroit beat the Bears 16-6 the week before, then allowed 17 to the Packers, 14 to the Buffalo Bills and just six to the Dallas Cowboys in the first round of the playoffs for a 38-6 drubbing.

Throughout the entire season, the Lions went 12-4, then 1-1 in the playoffs. Out of the 18 games, they allowed fewer than 20 points in 10 of them — including five games allowing 10 points or fewer.

And if you take out the season opener and NFC championship losses — both allowing 40-plus points to the Super Bowl champs — the Lions gave up 30 points in a game just two other times.

NFL fans remember Chris Spielman as the anchor of that team with 126 tackles. He was the face of the Detroit defense for years.

He wasn’t alone. Bennie Blades and Ray Crockett were stellar defensive backs and George Jamison was a strong linebacker.

But every play, the defense started with the man across from the pigskin: Jerry Ball.

Ball was the dominant nose tackle in the NFL that season. He started all 13 games he played in and forced a fumble and recorded a safety by tackling the great running back Eric Dickerson in the end zone in Week 4 against Indianapolis. He had 36 tackles and two sacks. Those numbers don’t dazzle, but the also don’t tell the whole story.

Ball was so good against the run that teams ran away from him, and when they didn’t he held his ground and stuffed up the middle so Spielman or someone else could get to the ball carrier. He had to be double teamed on a regular basis, or Ball would end up in the backfield.

Nose tackles are often the most unsung players on the defense, sometimes the entire team. Their stats are nowhere near their teammates because they aren’t going to make a tackle unless it is right in front of them.

But a stellar nose tackle is hard to find. Especially because most teams now run a 4-3 defense with four down lineman and three linebackers. That means there is no true nose tackle, just two defensive tackles.

Ball played on the nose of the football in a 3-4 that was popular for many teams to use at that time.

And in 1991, he was the best, voted first-team All-Pro at his position. It was also the year of his third consecutive Pro Bowl selection.

Ball was also a proud man and a team leader. Drafted out of Southern Methodist University, he was taken in the third round by the Lions in the 1987 NFL Draft. The Beaumont, Texas native had his share of battles with offensive linemen and running backs, but he also scrapped with the front office. Prior to the 1990 season he held out of Lions’ training camp over a contract dispute. He demanded a pay raise in keeping with his status as one of football’s elite nose tackles. Eventually he came back just prior to the opening game of the season.

“”Anytime you get a guy of Jerry Ball’s caliber it upgrades the position,” head coach Wayne Fintes told reporters. “Jerry Ball’s an all-pro lineman. It’s a great plus to have him report to camp and play this game.”

Also during his tenure with Detroit, which spanned  his first six seasons in the NFL from 1987 to 1992, Ball spoke out about racial tension on the team. During the 1991 season, Ball called out defensive line coach Lamar Leachman for “off-color jokes” he made while the team was practicing in the south. “I’ve complained about it but he keeps doing it,” Ball said. “One day, he told me he respects me as a player. I said that’s not what I want, I want to be respected as a human. I want to win a championship, and to do that, we have to have harmony on and off the field.”

Ball was always in the middle of things. It is one of the benefits to playing on the nose. But on the flip side, the nose tackle is an underappreciated position with statistics that make it easy to forget.

He never got that championship either, the closest he came was in 1998 when at the age of 34 he started at tackle for the Vikings, a team that got to the NFL Conference Championship before losing by three points. It was Ball’s last full season in the league.

But Lions fans remember Jerry Ball as being in the middle of the action seemingly at all times, especially when he anchored a defense that led the Lions as close to the Super Bowl as they have ever been.