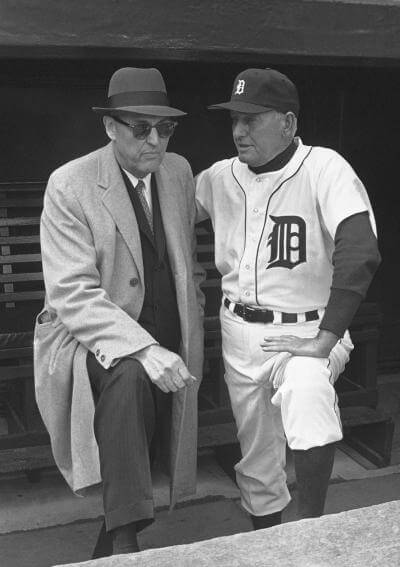 When he was just a boy growing up in Indiana, and before he became the owner of the Detroit Tigers, there were two things John Fetzer loved most: science and baseball.

He was born in Decatur, Indiana, in 1901. By the age of ten, he had already mastered Morse code, and two years later he was showing off his homemade wireless receiver-transmitter to the neighborhood kids.

He loved reading science fiction. “(It) predicted an array of things that would happen in the future,” he said as an adult. “I used to speculate as a youngster whether or not I would see any of that happen.”

But Fetzer also excelled at athletics, lettering in baseball, basketball, and track in high school. He took classes at Purdue University, where he burned the midnight oil studying the theories of Thomas Edison and Nikola Tesla. By 1922, while a student at Emmanuel Missionary College in Berrien Springs, he erected southwest Michigan’s first radio station, WEMC. He also earned a degree from the National Radio Institute. Soon after that, he enrolled at the University of Michigan to study modern physics and higher mathematics.

Fetzer played a large part in the development and standardization of the directional antenna, which allowed a radio station to broadcast better at night. It in turn paved the way for radio’s ascension as a mass communication phenomenon.

In 1931, Fetzer had moved his radio station from Berrien Springs to Kalamazoo, changing the call letters to WKZO. In 1940, the station began broadcasting Detroit Tigers baseball games. The Tigers’ play-by-play man was the great Ty Tyson, known for his dry wit (although some would call it sarcasm).

Fetzer was the first president of the National Association of Broadcasters, and oversaw the creation of the Broadcasting Code of Conduct.

In 1949, Fetzer Broadcasting received a license for its first television station, WKZO channel 3 in Kalamazoo. He purchased the Muzak franchise for outstate Michigan several years later. Muzak, of course, is the brand of ubiquitous background music that you sometimes hear in the waiting room at a hospital or when riding in an elevator (hence the term “elevator music”).

Broadcasting (especially the airing of Tiger games) had made Fetzer a man of considerable means, and in 1956 he organized an 11-member syndicate that purchased the Detroit Baseball Company from Spike Briggs, son of the late owner Walter O. Briggs. Fetzer became one-third owner and Chairman of the Board of Directors. “We plan to…inject new life into the Tigers,” Fetzer boasted. That was encouraging news for a fan base that hadn’t seen a winner since 1945.

By 1961, Fetzer’s WJFM in Grand Rapids had become the world’s most powerful FM radio station, at 50,000 watts. It was also the year that he became the sole owner of the Tigers, and within a year he was the self-appointed Chairman and President. About that same time, Fetzer renamed the ballpark at Michigan and Trumbull to Tiger Stadium, severing ties to the previous ownership and giving the fanbase a sense that the famed venue was communal property.

Banking on Fetzer’s know-how of the inner workings of the broadcasting industry, in 1962 the American League named him the chairman of its Baseball and Television Committee. He negotiated baseball’s first national TV contract in 1967.

Perhaps the shrewdest move Fetzer made as Tiger owner was his hiring of Jim Campbell as General Manager in 1963. Together, they built one of the best farm systems in the game, and the Tigers won the World Series in 1968. In the 1970s the team’s scouting department, led by one of Campbell’s disciples, Bill Lajoie, seeded the Detroit system with a flood of great young talent. Fetzer sold the team in 1983 to pizza mogul Tom Monaghan for $53 million (not a bad return on his investment). But much of the 1984 World Champion Tigers had been assembled under Fetzer’s stewardship, and he deserves credit for that. He remained with the team as Chairman of the Board until 1989, and died two years later.

Fetzer was one of baseball’s most influential owners, so it came as no surprise in November of 1989 when his name appeared on the Baseball Hall of Fame’s Veterans Committee’s executives/pioneers ballot. He received eight votes, which unfortunately was one shy of the 75 percent required by the committee of twelve.

Those who didn’t vote for Fetzer probably felt that one world championship in nearly thirty years of ownership does not make you deserving of the Hall of Fame.

I can’t argue with that logic. And if the Tigers had been willing to sign more African-American players in the 1960s, or had better luck in the playoffs with an aging team in 1972, they may have won more than just that one championship.

It also probably doesn’t help Fetzer’s legacy that his public persona was bland and uninteresting. During the late 1960s and early ‘70s, while the NFL was gaining popularity, major league baseball was viewed as old fashioned and hopelessly square (that means not cool). Fetzer definitely fit that image.

So he may not have been flamboyant and outspoken, like owners Charlie Finley of the A’s, Ray Kroc of the Padres, or George Steinbrenner of the Yankees. But he was one of the most influential baseball owners of his time, and was cited by future commissioner Bud Selig as the most important mentor he had when he entered the fraternity of baseball ownership. Not only did Fetzer maintain a stable organization, but he helped the sport navigate its way through the choppy waters of the television era.