Griffey Jr. once learned at the knee of Sparky Anderson 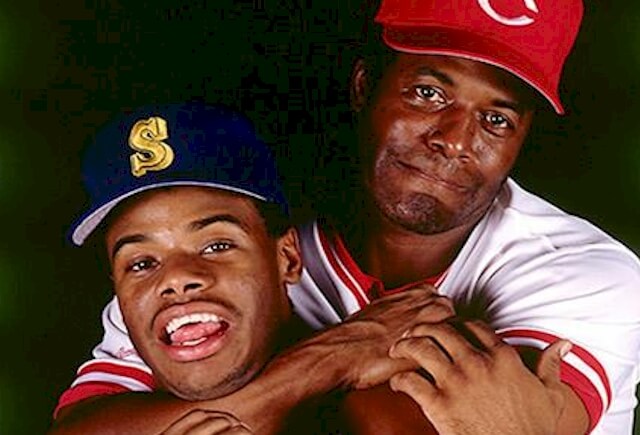 When Ken Griffey Jr.debuted with Seattle in 1989 his father was still playing for the Cincinnati Reds.

Later today the announcement will be made that Ken Griffey Jr. has been elected to the National Baseball Hall of Fame with one of the highest vote totals in the history of that cherished institution. Griffey will take his place among the greats in baseball history.

Even though he frequently made the game of baseball seem easy, when he steps to the microphone on the stage in Cooperstown this July, Griffey will have many people to thank. One of the people he mentions will probably be Sparky Anderson, the prematurely grey-haired man who called him “Lil’ Kenny” when he was too short to reach the drinking fountain in the clubhouse at Riverfront Stadium in Cincinnati. Junior Griffey may have never played for Sparky, but his father did, and for that reason he comes from Anderson’s baseball family tree in a round-about way.

The Big Red Machine might have been the greatest team in baseball history. Just tick down the list of the so-called “The Great Eight” in their starting lineup from the mid-1970s: Pete Rose, Ken Griffey Sr., Joe Morgan, Tony Perez, Johnny Bench, George Foster, Davey Concepcion, and Cesar Geronimo. Among that octet are three Hall of Famers plus Rose, who is a Hall of Famer by accomplishment but a pariah by reputation. Four of those eight players won at least one Most Valuable Player award, all of them were All-Stars, and six of them won Gold Gloves at various times in their careers. Bench and Morgan rank among the greatest players ever at their positions, and Rose has more hits than any man to ever swing the lumber in the big leagues.

On-field accolades alone stamp Sparky’s Big Red Machine as a team for the ages, but their genes add to their luster as well. Seven members of the 1975-76 Reds, who captured back-to-back World Series titles, had children who later became professional ballplayers. Chief among them, of course, is “Lil’ Ken,” who grew up to be Ken Jr. and simply “Junior” to a legion of fans in a shining career that led him from the Mariners to his hometown Reds and eventually briefly to the White Sox.

“We [the kids] took over that clubhouse a few times each year,” Griffey recalled in a 1993 interview. “Sparky was like a giant to us, [sometimes] we ran away from him because we weren’t sure what he’d say to us, [but] I loved being around him.”

In ’76 when Sparky’s Cincinnati juggernaut swept aside the Yankees in four games to win the Fall Classic, Griffey Jr. was six years old. He was older than Dusty Baker’s son (who was only 3 1/2 when he famously had to be rescued by J.T. Snow lest he be barreled over at home plate during a play in the 2002 World Series), but Junior was nowhere near savvy enough yet to understand the game that well. Griffey Sr. was an excellent ballplayer, he nearly won the NL batting title in ’76 and he was a career .296 hitter known for his speed.

“I always played the game and wanted to be like my Dad, but I also didn’t see [my Dad] play much when I was young because I had school and he was on the road a lot,” Griffey recalled.

Even so, before Sparky was fired by Cincinnati after the 1978 season, he had a few chances to speak with the young Griffey, as well as a few other young Reds offspring who eventually made it to the big leagues, including Eduardo Perez and Pedro Borbon Jr. By all accounts, Sparky was a good influence on the youngsters, and he always loved kids, as evidenced by the charity he started in Detroit called “CATCH” (Caring Athletes Team for Children’s & Henry Ford Hospitals) which has raised millions before and after his death.

Later, when the 19-year old Junior Griffey came up as a rookie with the Mariners in 1989, one of his first stops was at Tiger Stadium to face Sparky’s team. Anderson couldn’t have been more proud to see the young Griffey in a major league uniform. Ironically a few years later Sparky and Junior were embroiled in a controversy after Griffey became frustrated in a series between his team and the Tigers in Seattle. By this time, Griffey was murdering big league pitchers with regularity. But true to his philosophy that he never liked to let the other team’s best hitter beat him, Sparky had his pitcher pitch around Griffey in the series. In the second game he walked Griffey four times. But in the series finale Junior got a pitch over the plate and blasted a three-run homer. As he approached home plate the young slugger had some choice words for Sparky and he may or may not have flashed an obscene gesture toward the Detroit skipper.

Griffet denied giving Sparky “the bird” but he did admit to being angry: “I did say something to Sparky, and I will apologize to him for it.”

By all accounts Sparky forgave Junior for his youthful transgression, but it still stung a little a few weeks later when the Mariners came to Tiger Stadium and Griffey belted not one, but two home runs off Detroit starter Bill Gullickson.

“He’s the best young hitter we’ve had in this game since Ted Williams,” Sparky told reporters at the peak of Griffey’s powers. And he was right. Griffey won the MVP award in 1997, and finished in the top ten six more times. He garnered ten consecutive Gold Glove Awards for his daring play in center field. Griffey hit 630 homers in his 22-year career, and had injuries not robbed him of about 500 games after his 30th birthday, he would have probably eclipsed Babe Ruth’s career mark.

But in spite of his injury woes in the second half of his career, later this summer Junior Griffey will see his Hall of Fame plaque hung only a few feet away from Sparky’s in Cooperstown. Right where it belongs.