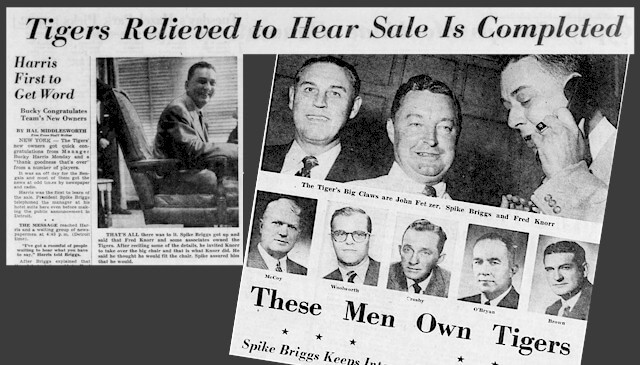 The Detroit Free Press announced the sale of the Detroit Tigers on July 17, 1956.

When Fred Knorr was born in Detroit on July 9, 1913, the auto industry was in its infancy and most people had no idea what a radio was. But within a few years the city became a fertile place for those technologies to germinate and change the world. Knorr built a career in radio through hard work and ingenuity, and decades later his progressive ideals helped move the Detroit Tigers forward in important ways.

Young Freddy grew up in eastern Michigan where he loved music and was fascinated by early recordings of musicians. He chose Hillsdale College in Hillsdale, Michigan, where he planned to pursue career as a pianist. But as often happens to plans, they change. By the time Knorr was in college the radio was changing the way people were receiving news and being entertained. He loved it and he wanted to be a part of it. In 1937 he was chosen from more than 100 people to be a radio broadcaster at WJBK in Detroit. The air above the city was buzzing with radio signals: in 1920 the first ever radio news broadcast had been produced in Detroit. Radio stations and their familiar towers were popping up all over Michigan.

“They didn’t call us disc jockeys in those days,” Knorr said of his early days in the medium, “but I guess that’s what I was.”

As he launched his career in the fledgling radio industry, Knorr also had one eye on baseball, one of his favorite distractions. During his late teens he’d been a highly regarded pitcher in Detroit and even briefly played professional ball. The 1930s Tigers were thrilling: led by manager Mickey Cochrane and star infielder Charlie Gehringer, Knorr’s favorite player.

In the early 1930s, Knorr became chummy with Tiger broadcaster Harry Heilmann and even had a chance to step in his shoes when he’d climb the ladder to the press box on visits to Navin Field.

“Harry let me do a couple of innings of play-by-play and I was in my glory,” Knorr said.

In the 1940s, Knorr purchased four radio stations in Michigan. The gem of his burgeoning media empire was WKMH, which beamed broadcasts of Tiger games across the midwest. By the 1950s, the Knorr Broadcasting Co. was a major network of stations in Michigan and a few other states. He also made a fortune as president of the Fred A. Knorr Insurance Agency. Knorr was poised to make a move into new territory.

“I guess everyone who ever played the game, or ever loved it as a fan, must sometimes think he would like to own a ball club,” Knorr said later, “I know I always did—although never too seriously.”

In 1956, Knorr joined a group led by John E. Fetzer, one of his competitors, in an effort to purchase the Tigers from the Briggs family. Since 1935 the team had been in the Briggs family, first controlled by Walter O. Briggs Sr. until his death in 1952. After that, his son Walter “Spike” Briggs Jr. took over. But Junior was never able to enjoy ownership of the Tigers because of a feud that resulted in dark days for the team.

After Briggs Sr.’s death in 1952 at the age of 74, his heirs quickly gathered to stake their claim on his fortunes. Smack dab in the middle of that fight over money and real estate was the Tigers, once one of the most coveted assets in all of sports. As the oldest son, Spike had long been groomed to take over the club, but he was not as savvy as his father when it came to business matters. But he did share one personality trait with his old man.

The younger Briggs was not progressive when it came to racial relations. Major League Baseball had been integrated in 1947 when the Dodgers added Jackie Robinson to their roster and showed that players of color were just as capable on the diamond. Soon, most big league teams followed suit, feverishly signing black players. All except a few. By 1955 only the Phillies, Red Sox, and Tigers had failed to integrate.

It was against that ugly backdrop that Spike was fighting to keep control of the Detroit Tigers. But eventually, members of his family and their lawyers were too much for him. Late in 1955 the executors and officials navigating the complex web of assets left behind in the wake of Briggs Sr. got a court to rule that the Tigers had to be sold. Within six months, Fetzer and Knorr and their silent partners purchased the team for less than six million dollars. For the first time in more than two decades, the Briggs did not own the Tigers. It was a new era, in more ways than one. But if Knorr and the new ownership group were planning on shifting the direction of the team they didn’t make those schemes public.

“Our aim is to return a profit on our investment. The Detroit baseball club, to each of us, is a business venture,” Fetzer told reporters on the morning that the sale was announced.

Knorr was named president of the team, while Briggs was retained (at least briefly) as general manager. “None of the men in this group has ever been associated with failure,” Knorr said confidently, “We have money to spend and the desire to work. That will be a tough combination to beat.”

Sports Ilustrated reported: “Fetzer is the first to point out that Knorr, because of his temperament and personality and boundless energy, ‘is the Grover Whelan [sic] of this organization.’* There is one other reason why Fred Knorr is the president of the Detroit Tigers: the whole thing was his idea in the first place.”

The 1950s were a head-scratching disappointment for Tiger fans. On the one hand the club employed an arsenal of fine ballplayers: George Kell, Ray Boone, Walt Dropo, Harvey Kuenn, Charlie Maxwell, and the young Al Kaline. But they never finished closer than 15 games of first place between 1951 and 1959. Add the confusing front office situation and the decade was a mess. During the decade the Tigers had five different general managers.

The press described Knorr as “affable almost to the point of ebullience.” Ebullience is defined as “the quality of being cheerful and full of energy.” Knorr aimed that energy at his new role as president of the Tigers. That included righting an old wrong. In his first year with the club, Knorr instructed his scouting department to find black players and promote them through the system as soon as their talent warranted it.

In 1950 the population of the city of Detroit was nearly 1.9 million, the highest it ever was. About 16 percent were African American. According to the 1960 census, one out of every four Detroiters was black. Yet the Tigers didn’t field their first black player until 1958, and only because Fred Knorr made it happen. On June 6th, Ozzie Virgil appeared at third base for the Tigers to finally integrate the team.

Sadly, though he was making progress and helping to turn the team around, Knorr did not survive to see the Tigers success in the next decade. The day after Christmas in 1960, Knorr accidentally fell into a bath of scalding water and died as a result of his burns. He was only 47.

Given his brief tenure as the senior man of the Tigers, it’s not surprising that many people don’t remember Knorr. But his impact on the history of the Tigers was historic.

* Grover Whalen was a famous PR man known for his enthusiasm and charm in the 1930s and 1940s.