Leach was born with Maize and Blue in his blood, played for Tigers for three seasons 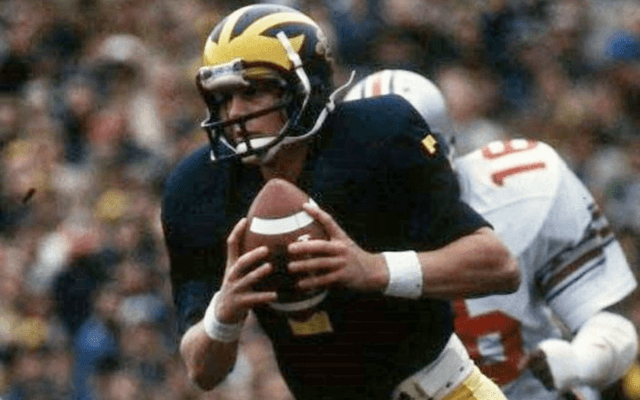 Rick Leach was the starting quarterback for the Michigan Wolverines for three years before choosing to become a professional baseball player. He was drafted in the first round by Detroit in 1979.

Rich Leach was the face of the Michigan Wolverines football team.

Kirk Gibson was the face of the Michigan State football team.

The two All-Americans had many battles on the gridiron, and on the baseball diamond in college. Both chose to continue their baseball careers and both were drafted by the Detroit Tigers in the first round.

“The way it worked out was unbelievable,” Leach said during his appearance at a recent West Michigan Whitecaps Michigan-Michigan State Rivalry Day. “Kirk Gibson and I were arch rivals in college and best friends after that.”

Gibson was drafted No. 12 overall in the 1978 MLB Amateur Draft, while Leach was the No. 13 pick the following year after finishing third in the Heisman Trophy voting. Their bond as elite multi-sport athletes was instantaneous once they were on the same team.

“We had a chance to play together,” Leach said, who led Michigan to three Big Ten titles and three Rose Bowl appearances. “We competed against each other in college. With that kind of rivalry, we didn’t want to converse too much. He was drafted and I met him there and that is where it started. We became teammates the following year. I knew so many of their players because our Michigan baseball team used to go to Lakeland for spring break.  So I got to know them. That was very exciting.”

Leach was on both sides of a pretty good baseball rivalry in the 1980s between the Tigers and the Toronto Blue Jays.

“I was picked up by the Blue Jays and played there for five years,” Leach said. “I was right in the middle of the rivalry. The rivalry was so strong in the ’80s. It was tough because of my relationship with the Detroit guys.”

And the Tigers being his hometown team, born in Flint. It was devastating when Leach was released by the Tigers in spring training of 1984, leaving the hometown hero out of the picture for the magical World Series run.

“Growing up here, I was fortunate enough to be drafted by the Tigers,” he said.

Leach played three years with the Tigers, batting .236 with seven home runs in 235 games. He then went on to Toronto for five years before finishing his career with a year in Texas and a year in San Francisco. He batted .268 for his career with 18 home runs, 183 RBIs, 205 runs scored in 799 games.

His first thrill in the big leagues came on August 18, 1981, at Tiger Stadium against the Twins. Leach hit a towering three-run homer into the lower deck in right field off righthander Roger Erickson in the sixth inning to break a scoreless tie. It was his first major league home run, and Gibson got a great look at it — he was standing on second base and scored right in front of his former college rival. Another big moment came on September 29th when Leach stroked a three-run triple in a blowout win over the Orioles at The Corner. The vistory kept the Tigers in a tie atop the AL East.

Leach made the opening day roster with Detroit in 1982 and 1983, but had a difficult time finding playing time. The Tigers had several outfielders and first basemen in the pipeline at that time. Sparky Anderson used him as a defensive replacement and off the bench as a pinch-hitter. In three years with the Tigers, Leach hit four pinch homers.

But the Tigers-Blue Jays rivalry was nothing compared to Michigan-Michigan State football.

“We were 3-1 [against MSU] when I played but the one loss was my senior year, so that sticks in your craw for a long, long time. It is a great rivalry. You have a lot of friends at both schools from high school. I love college football, that is my passion. I look forward to football season every year. Back in those days there were normally three red-letter games [Michigan State, Ohio State and Notre Dame]. Players know what’s going on. They know when it is a big game. They know to be ready. You don’t have to worry about attitude being good that week.”

You never know, one of those opponents might just become a teammate down the road — maybe even in another sport.