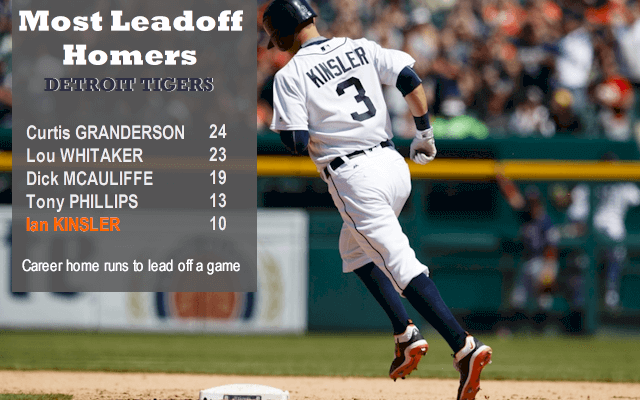 One of the most beloved Tigers of this last decade was outfielder Curtis Granderson, who now swings his bat for the New York Mets. He had the knack for lighting up the Tigers’ clubhouse with his signature smile and his endearing, vibrant personality.

The “Grandy Man” quickly became a star on and off the field. He spent four full seasons with the Tigers (2006-09), coinciding with the teams’ resurgence, and became known for his charitable contributions to the greater Detroit community.

Granderson started his own foundation called the Grand Kids Foundation in 2007 — a foundation focused on three aspects: education, physical fitness and nutrition.

And believe it or not, he holds a connection with someone on this year’s Tigers roster not named Justin Verlander.

Verlander, who will always possess a special bond with Granderson from being one of his teammates during Detroit’s improbable 2006 AL championship season, is the last remaining member of that unforgettable year’s squad.

But this article is not meant to reflect on that narrative. Instead, it’s intended to focus on Grandy’s ability to hit homers to begin games and how that has connected him to present Detroit leadoff hitter Ian Kinsler.

Granderson, who set the Mets’ single-season record for leadoff home runs last season with seven, has recorded the same amount of leadoff long balls through 80 starts atop the Mets’ lineup this season.

And he was as potent with the leadoff long ball during his time in Motown.

In his second full season as the club’s starting center fielder (2007), he set the single-season franchise record for home runs to start a game.

And he did so by hitting an amount of leadoff homers that has since become very common to him: seven.

He repeated the total in 2009, and held the club single-season record by his lonesome until Kinsler tied the mark on September 12 against Ervin Santana and the Minnesota Twins.

It got me thinking about who’s been more productive when leading off a game during their time with the Tigers. Let’s go to the stats to find out. While this isn’t an exhaustive study, you can see a list of the best leadoff hitters in the history of the Detroit Tigers.

Grandy made an immediate impact batting leadoff on a full-time basis in 2006. In Jim Leyland’s inaugural season as Detroit skipper, the Grandy Man hit .312 with six home runs and a .973 OPS in 139 plate appearances as the first batter of the game for the Tigers.

Although he proved to be quite ineffective when leading off a game during the 2008 campaign (.195 average, four homers and .611 OPS in 124 plate appearances), he managed to rebound in ’09 for seven big flies and a .779 OPS in 130 plate appearances.

Kinsler hasn’t come close to matching Granderson’s success in leading off for the Tigers. But then again, few players (other than Lou Whitaker) have been able to. Granderson has even hit a home run to lead off a World Series game. See the video here:

Kinsler, who has been Detroit’s starting second baseman since 2014, only hit .203 with two home runs and a .595 OPS in 83 plate appearances as the leadoff batter during the ’14 campaign.

As for 2015, it’s not fair to take a huge amount of meaning from Kinsler’s stats as the first Detroit bat to face the opposition.

It’s because last year’s center field duo of Rajai Davis and Anthony Gose received most of the at-bats to start games.

Davis and Gose combined to lead off 136 games while Kinsler started 25 games in ’15 as the leadoff bat.

Despite the franchise record-tying seven homers he has hit to start off a game so far this season, Kinsler has struggled to make contact and to get on base consistently as the leadoff guy, with a subpar .237 BA and a lackluster .281 on-base percentage.

Therefore, while Kinsler and Granderson will always be connected to each other due to their respective tenures as Detroit leadoff men, there is no debating who has the upper hand in being able to lead off a game more productively. It’s the man with the charm and wit capable of winning over both a clubhouse and a room full of fans: the Grandy Man.