Leyland’s return would light a fire under lackluster Tigers 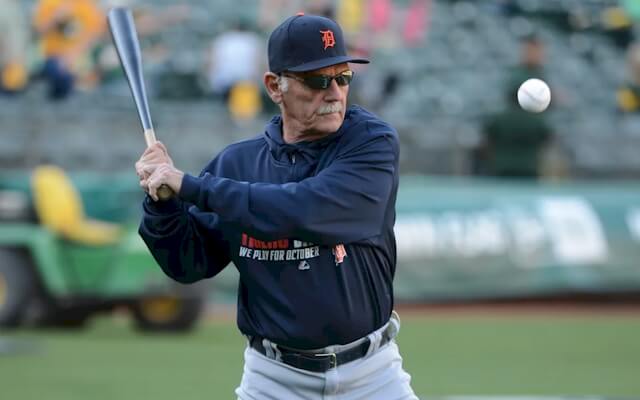 What’s the one move the Detroit Tigers could make that would be a shock to their system?

Since his departure after the 2013 season, Leyland has maintained a connection to the franchise. He’s apparently still earning a check from the Ilitch family, as an adviser. But simply watching baseball games has never been enough for Leyland, who has the game in his blood.

In March he returned to the dugout and managed the United States to a title in the World Baseball Classic. His performance was applauded by his players, most of whom had never had the chance to play under the crusty veteran skipper. It’s obvious Leyland’s managerial maneuvering is far from over.

The Tigers would not be asking Jimmy to commit to much. He could move back into his old office in the guts of Comerica Park and return to his incessant lineup tinkering. He would be welcome to enjoy his postgame meals once again while giving postgame interviews. He could wrap his wiry arms around his players and whisper advice in his gravely voice. He could give the Tigers three or four months of service and go for it one more time.

The Return of Smoky would be a Steinbrennian move. In the 1970s and 1980s, Yankee owner George Steinbrenner had no problem shuffling in new managers or recycling old managers to light a fire under his team. More than once he brought back the firebrand Billy Martin. Often it worked in the short term.

The Tigers are all short-term. These guys aren’t buying green bananas. The future is now. Miguel Cabrera, Ian Kinsler, and Justin Verlander are working on borrowed time. Their best years are behind them, and they’re only going to be dangerous for a little while longer.

The AL Central division is ripe for the taking. The Indians are struggling to find their footing. The Twins are bound to sink. The White Sox are a sub-.500 team without an identity. The Royals are a hollow imitation of the group that won the World Series two years ago. No one is running away with this five-team scrum.

The Tigers can score enough to compete with the mediocrity in their division. They’ve improved some at fielding the ball. The lineup is bound to hum once Miggy finds his stroke and Nicholas Castellanos gets going. Those two are keys to run production. But they can’t outscore teams every night if they find themselves in a hole.

The primary reason the Tigers need a new skipper is the pitching staff. Everywhere you look: the rotation, the bullpen, the leadership from the pitching coach and the manager, the team has failed. Brad Ausmus is asleep at the wheel. He shows little evidence that he’s learned how to manage a pitching staff even though this is his fourth season as a manager. He vacillates between being a push-button manager and being rudderless. He frequently looks like a deer in the headlights as he stares out at the diamond from his perch in the dugout. There are signs that the team lacks confidence in him. After reliever Shane Greene was pulled from a recent contest, the pitcher barked “unbelievable” as he left the mound. The Tigers as a group seem dull and uninterested. They are a reflection of their stoic, lifeless manager.

If there’s one thing Jim Leyland has never been, it’s lifeless. And the former Tiger manager never tolerated uninspired effort. Ausmus seems like a pilot who’s content to let the computer land the plane. Leyland likes to have his hands on the stick. The Tigers need a decisive Sully Sullenberg, not an auto-pilot.

If the Tigers fire Ausmus during the season, and if they are still within a handful of games of first place at the time, they shouldn’t reach for someone new to take them forward. They should go back and grab a trusty veteran who knows how to make winners out of whiners. They should invite Jim Leyland to make one last run.