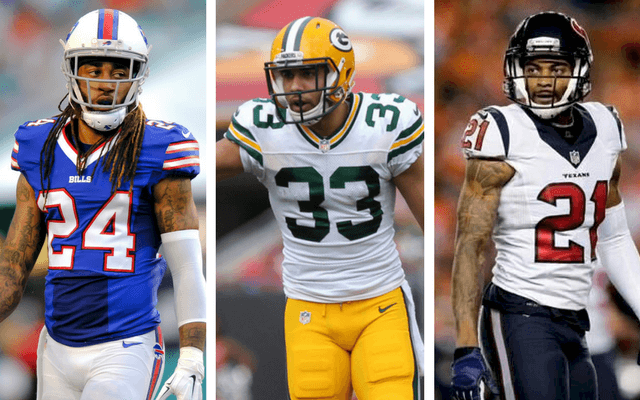 Stephon Gilmore, Micah Hyde, and A.J. Bouye are all available to help in the defensive backfield.

Ever since the Detroit Lions rode their defense to an 11-win season and the playoffs in 2014, the team has taken steps backward on the defensive side of the ball. That’s been particularly apparent in the secondary. With cash in hand due to some contracts coming off the books, Detroit has a chance to make quick upgrades in that area as free agent season approaches.

The question is: will general manager Bob Quinn get the green light from Martha Ford to spend freely?

Last season Quinn made a splash when he inked free agent wide receiver Marvin Jones to a $48 million deal and also lured cornerback Darius Slay to Motown for $48 million for four years. While Quinn and the Lions aren’t making anyone think they’ll be as aggressive on the free agent market as the duo of Dave Dombrowski and Mike Ilitch were with the Tigers back in the day, it was a positive sign to see the Detroit football team attract some talent via the money route.

Recently, Quinn admitted that the Lions might once again be players in the FA auction season, and he also hinted that the defense was a place of need. In 2014 the Lions ranked third in the NFL in fewest points allowed and second in fewest yards surrendered. The last two seasons they’ve been 18th in the latter category. Opposing quarterbacks have too often been able to slice up the Lion secondary for big pass plays. An upgrade at either cornerback position or safety would be a plus.

There are several defensive backs on the free agent market in 2017. The free agent season starts offocially at 4 PM EST next Thursday on March 9th, when teams can start making offers and inking deals. Some of the top free agents are still linked to their current teams, but there are three quality defensive backs that will probably be changing uniforms. Detroit should take a serious run at one of them.

Playing for Buffalo, Gilmore made his first Pro Bowl this past season and he’ll be an attractive option for many teams. The 26-year old has often been injured, getting nicked up almost every year of his five-year career, but last season he appeared in 15 games for the Bills and had a career-best five interceptions. He has a knack for being around the ball and is a good play maker.

The 25-year old cornerback from the Texans plays the same position as Detroit’s Nevin Lawson, who last season was one of the worst in the NFL at defending the pass. QB’s loved to pick on Lawson and it cost the Lions on many third-down situations. In contract, the QB rating when passes went toward Bouye in 2016 was just 58.5, well below the 113.5 that Lawson surrendered.

There will be fierce competition for Bouye, who played very well in Houston’s two playoff games. He’s a potential shutdown-type CB, if he isn’t one already. Detroit will have to pony up to get Bouye, but it would be a huge upgrade and a tremendous boost to the defensive unit.

How much would it irritate the Packers if the Lions were able to rip Hyde away from them? The 26-year old four-year pro has played mostly safety for Green Bay, but he’s also versatile. He’s appeared some at corner and is also a very good kick and punt returner. In his short career he already has eight interceptions from the free safety position and he’s also known as an excellent tackler and plays well near the line of scrimmage when needed on the blitz or run defenses.

Let’s face it, the big goal for the Lions is a playoff win. It’s been more than 25 years since they did that. What’s the best path for the Lions to get it? Is it to load the offense and ride the arm of Matthew Stafford? Or will it be better to build a solid defensive 11 and win games that way? If Quinn & Co. choose the last route (which makes sense to me), they should target a top free agent defender, preferably one that helps against the pass and improves their mediocre turnover ratio, which ranked 20th in the league last season.