Lions latest comeback win was not like the others 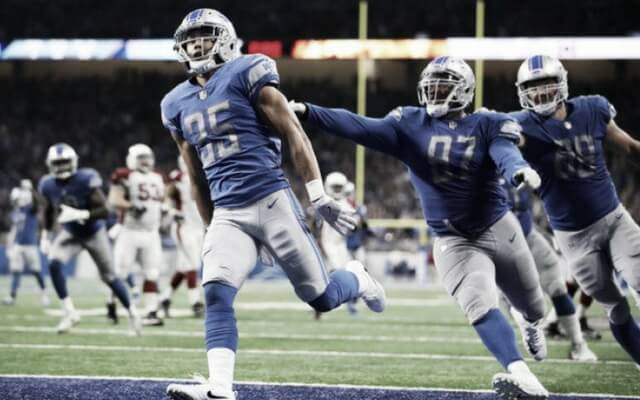 Miles Killebrew scores a touchdown on an interception return in the fourth quarter of Detroit’s 35-23 victory over Arizona on Sunday.

The Lions were in familiar territory as the fourth quarter started last Sunday in their game against the Cardinals. They were losing.

Just where Matthew Stafford is comfortable.

Stafford threw two touchdowns in the fourth quarter, both of them to rookie Kenny Golladay, as Detroit zoomed past the Cardinals and won 35-23 to open the 2017 campaign.

It was yet another fourth quarter comeback victory for Stafford and Detroit, the ninth in their last 17 regular season games. Nine of their last ten wins have come when they were behind in the fourth quarter. As uncomfortable as it is for their fans, Stafford and his teammates are used to being on the wrong side of the scoreboard with 15 minutes left to go.

But Sunday’s win was much different than the myriad of comebacks in 2016. Last season, Stafford performed like a superhero swooping in to save the day. (His supporters would compare him to Superman; his detractors might prefer Mighty Mouse). This victory was a team effort.

The Lions picked off two passes from Carson Palmer in the last quarter, which was just as important as the two Stafford-to-Golladay strikes. A pick-six by safety Miles Killebrew was the game-over play for the Lions.

The Lions haven’t made those plays in previous years. Their defense hasn’t always helped out their offense. In the Jim Caldwell era, it’s been the offense that’s rescued the defense. But Sunday the defensive eleven rose to the occasion, often from unlikely sources.

Killebrew, a fourth-roun draft pick in 2016, didn’t play much until the last six weeks of his rookie season, and he had only one pick. Now he’s playing a big role in Detroit’s defense, led by defensive coordinator Teryl Austin. Experts pegged the defensive unit, especially the secondary, as a weakness coming into the season. But defensive unit played inspired.

The Lions forced two fumbles in addition to the three picks, and they got fine play from a few relatively anonymous linemen. Second-year defensive end Anthony Zettel came up with a big sack of Palmer that set up a Detroit drive and score. A Tawas City native, Zettel was making his first start in the NFL and his sack tied his entire total from his rookie season.

The special teams unit made some bonehead plays, most notably a botched punt from their own end zone that ended with scared-out-of-wits Kasey Redfern running for his life. The kick return team made not one, but three bad decisions that cost the Lions valuable yardage in the first half. But the special teams still did their part.

Matt Prater booted a 58-yard field goal after Stafford orchestrated a drive at the end of the first half. The field goal matched the second-longest ever in franchise history. Prater is one of the two or three best kickers in the game and you get the feeling that his right leg will play a part in several games this season for the Lions.

The running game never got going, but that had more to do with the Arizona defense than it did with Ameer Abdullah and the offensive line. The Cardinals sacked Stafford only once, though he escaped pressure a few times. But overall, the line did a good job of giving the QB time to knife through the defense.

The box score shows Stafford with 4 TDs and almost 300 yards passing. A fine performance for the highest-paid player in the league. The highlight reel shows him firing a touchdown to Marvin Jones in the corner of the end zone after dodging pressure, a play that was Aaron Rodgers-like. But this win was not a Stafford miracle.

The Lions came back to beat their opponent on Sunday because they performed well as a team down the stretch. We’ll call that progress.