Lions should trade Megatron and let him pursue a championship elsewhere 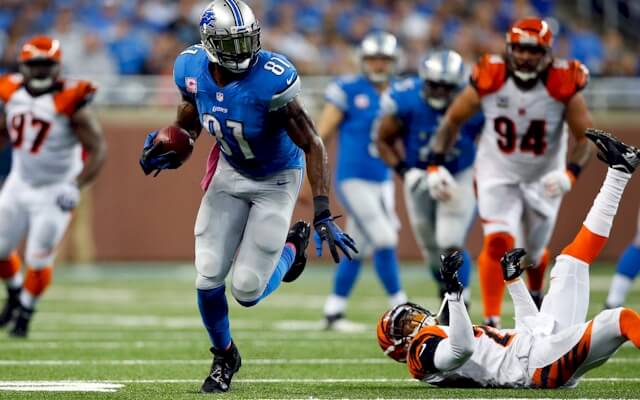 Could Calvin Johnson be catching passes for a new team next season?

The six words that every parent is bound to hear from their young children around Christmas.

If you drop the “mommy, daddy”, it’s something that professional athletes in a losing environment might start thinking to themselves as well.

In the case of a football player, the “new toys” are new teammates that will be brought in by the team or the players that player will gain by joining a new team.

It’s a sentiment that might soon be realized by the Detroit Lions’ all-time leader in reception yards, Calvin “Megatron” Johnson.

Going into the Lions’ final game of the 2015-16 campaign against the Chicago Bears, “Big Play C.J.” has lost 86 of the 134 games he’s played for Detroit. That’s a stomach-wrenching .359 winning percentage.

Which might result in Megatron wanting to find out what “toys” the league’s 31 other franchises can offer.

It shouldn’t surprise anyone if the 30-year-old and nine-year league vet requests a trade this offseason as the Lions enters a new era, marked by the hiring of a new general manager and subsequently the likely appointment of a new head coach. Already the franchise is shifting after the death of owner William Clay Ford 19 months ago. His widow has her hands on the reins and she cleaned house this past season by firing front office and on-field personnel. More moves are coming, most likely on “Black Monday” after this current season comes to a close.

The new Lions era is likely to be a transitional period, consisting of inconsistent play and sub-.500 football, that the Georgia Tech product should not be subject to as he enters the twilight of his career in the “Not For Long” league.

Johnson is no longer the player who recorded three straight seasons of 1,450-plus receiving yards and at least 105.1 yards per game from 2011-13.

Yet, before he becomes incapable of putting up 1,000-plus yard campaigns, which is an amount he’s managed to record this season and every season since 2010, the Lions should give him a chance to win with some shiny “new toys” elsewhere.

With that being said, despite C.J.’s yards per reception total being at a career-low mark of 13.8, his trade value remains relatively high.

One of the main reasons for that being the case is he’s played in 15 games so far this season and is on pace to play in a full season’s worth of action for the first time since 2012.

Additionally, from Detroit’s perspective, there might not be a more perfect time to trade the franchise’s all-time reception touchdowns leader. Here’s the reason why: as part of the mega seven-year contract extension Johnson signed in 2012, he is set to make $15.95 million and to leave the Lions with a cap hit of slightly over $24 million next season, according to Spotrac.com.

No team going through a transitional period wants to be subject to such a cap hit for a player who will be 31 on September 29th of next year.

If dealt, #81 will be missed by Lions fans. But the trade will be worth it, as it will provide him with a better chance to win in the immediate future plus give the Lions and their new regime assets that will come in the form of mid-round draft picks.

And remember this: no matter where he’s dealt or how many Super Bowls he might win with his next team, he’ll always be a Lion and will one day be welcomed into the Pro Football Hall of Fame in Canton, Ohio, as a result of his remarkable single-season feats — i.e., breaking Jerry Rice’s single-season record for receiving yards in 2012 — and career feats with the Lions.