Lions and Wolverines are not ready for prime time yet 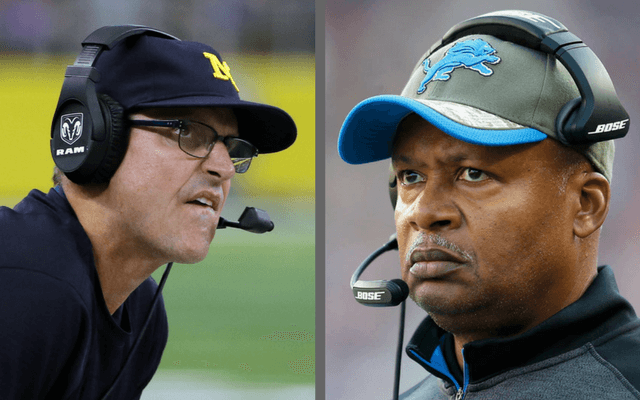 Two maligned Jim’s: Harbaugh of the Michigan Wolverines and Caldwell of the Detroit Lions.

The Lions and Wolverines still aren’t good enough to win the big game, and they both proved it once again over Thanksgiving weekend.

Jim Caldwell and the Detroit Lions (6-5) fell to the NFC North-leading Minnesota Vikings in the Lions’ annual Thanksgiving game, while Jim Harbaugh and the Michigan Wolverines (8-4) fell to Ohio State in “The Game” for the sixth straight time.

The Lions did beat the Vikings earlier in the season (Week 4 in Minnesota), but it came in the same game that electrifying rookie Minnesota running back Dalvin Cook suffered a season-ending torn ACL.

Fast forward to the Lions’ contest with the Vikings on Thanksgiving. With a win, Matthew Stafford and Detroit had a chance to pull within a game of the Vikes for the NFC North lead, and would’ve possessed a potential head-to-head playoff tiebreaker.

In typical Lions fashion, Detroit dropped what was a “must-win” contest, and fell three games behind Minnesota. The Lions all but conceded the divisional crown for a 24th straight campaign.

As for the Wolverines, they failed to beat Urban Meyer and the Buckeyes at The Big House even after Buckeyes quarterback J.T. Barrett exited with a knee injury midway through the third quarter.

Redshirt freshman quarterback Dwayne Haskins was forced into action with OSU trailing, 20-14, and led the Buckeyes on back-to-back scoring drives. Haskins finished 6-of-7 passing for 94 yards.

If Michigan wants to start gaining the respect that their rivals from Ohio have garnered during the Meyer era, it will need to at least beat the Buckeyes when the Buckeyes have a backup QB playing.

It doesn’t matter that Meyer, who improved to 6-0 in The Game, came into the contest with his Buckeyes playing a better brand of football and being a double-digit favorite.

It also doesn’t matter that the very underwhelming John O’Korn had to make the start at quarterback for the Wolverines due to both Brandon Peters and Wilton Speight being unable to suit up.

Michigan, which is now 0-3 in The Game since Harbaugh took over as head coach in 2015, should’ve beaten the Buckeyes.

Especially since U-M scored the first 14 points of the game and had a lead before the Buckeyes’ star QB exited the contest prematurely.

Even more importantly to U-M fans, Harbaugh lost to both Michigan State and OSU in 2017. It dropped his overall record against rivalry schools to 1-5.

If Harbaugh wants to maintain the god-like reverence and abnormal obsession he’s received from a large sect of Wolverines fans, he must beat both the Spartans and Buckeyes next season.

And unless he does, Harbaugh and Michigan will also continue to suffer from the reputation that they can’t win the big game. Just like the Lions have been doing for years.