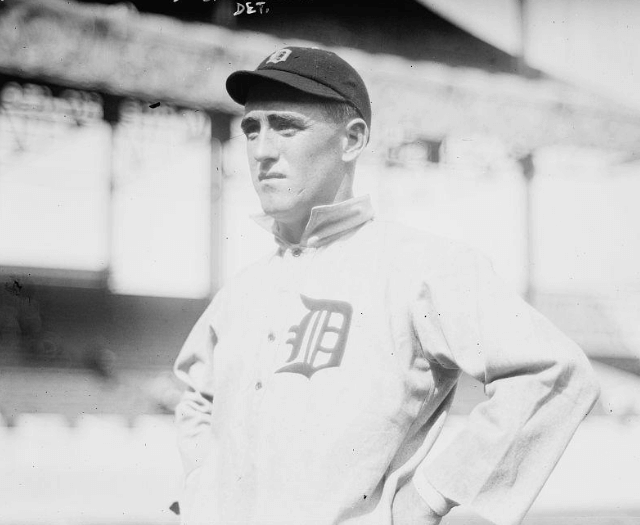 How many years do you have to be in the game to earn the title “King of Baseball”? For Owen Bush, it took nearly sixty years. By that time, the little fella from Indy had done almost every job you could do in professional baseball.

No one called Bush, Owen, which was his given name. They called him “Ownie” in Indianapolis in the late 19th century, when Bush was growing up in a fatherless family. The senior Mr. Bush died when Owen was a child, and he and his siblings struggled in the Irish-American neighborhoods of east Indianapolis. Maybe he failed to get into the dinner line, because Ownie grew to barely 5-feet-6 inches tall. But he was quick and a good athlete.

Donie Bush was the best player found and signed directly by Frank Navin, who held controlling interest in the Detroit Tigers for more than twenty years. Navin happened to own interest in the pro team in Indianapolis, and received a tip about the pesky little Bush, who was performing as an infielder in the city that rivaled Detroit for auto supremacy in the first decade of the twentieth century.

A tiny fella with narrow shoulders and short legs, Bush defied the odds and outplayed players with better pedigrees as he moved his way through the professional ranks, ultimately landing a chance with the Tigers in September of 1908. When Detroit purchased his contract, a clerical error resulted in his first name being listed as Donie (pronounced DOE-KNEE) instead of Ownie, and as a result a baseball alias was created.

Bush joined a team embroiled in a tight pennant race, and he proved important, running the bases like he was Ty Cobb’s little brother. Detroit won the pennant but regular shortstop Charley O’Leary returned from injury and got to play in the World Series. Bush took that personally and vowed to never be beaten out of a job again. The following year he began a 13-year stranglehold on his job in the burgeoning Motor City.

When the greatest offensive lineups are discussed, the Detroit Tigers of the Deadball Era are often short-shrifted. They had one of the greatest offensive weapons in baseball history in the middle of their lineup, Ty Cobb. Every season he would do his Ty Cobb things, like steal 85 bases, get 225 hits, and lead the league in runs and runs batted in while hitting close to .385 or .390. Then there was Sam Crawford, the moody right fielder who was one of the best sluggers of the first 25 years of the 20th century and smacked more than 300 triples. Detroit had a left fielder named Bobby Veach, who hardly anyone remembers, but who was very good. If you want a comp for Veach at the plate, he was a lot like Fred Lynn or David Justice: a strong left-handed hitter who could hit a homer, drive the ball, and produce runs. Cobb, Crawford, and Veach rate as one of the greatest outfields ever, even if they weren’t chummy.

At the top of the order, getting on base in front of the three big Detroit boppers, was little Bush, all 140 pounds of him. At 5’5 and some change, Bush crouched down so his strike zone was small, and he had a keen eye, leading the league in walks five times and averaging 99 walks per 154 games. He scored an average of 111 runs per. He was an ideal leadoff man.

That Detroit lineup, formed on the quartet of the three hard-hitting outfielders and Bush, stacks up well with the Big Red Machine of the 1970s for run-scoring. Later in the 1910s they added Harry Heilmann, a four-time batting champ. Here’s how the Tigers ranked in runs scored in the American League during the Bush/Cobb et al period:

In 1915 the Tigers were 163 runs better than the league average, or more than one full run higher than any other team. That season Bush had a down year, hit only .228, but walked 118 times and stole 35 bases, still managing to score 99 runs. The three outfielders averaged 35 doubles, 14 triples, and 108 RBI. Detroit had a +181 run differential and won 100 games, but finished second to the Red Sox, who had an actual pitching staff.

Bush has great defensive stats. He still holds the record for assists by a shortstop in a single season, but that’s largely because the Tigers had a lot of ground ball pitchers and their infield grass was high enough to hide a small child. His double play stats are poor, and Bush made a lot of errors, and a large number were throwing errors, as compared to others at his position. His arm, hanging from those unimpressive shoulders, was a little weak, and his throws would hit the dirt short of first base too often.

Bush’s playing career could have continued as a third baseman but he accepted the revolving door position as manager of the Senators. He didn’t fare well, but Bush was an obedient old ballplayer who was respected by the dusty old men who guarded the gates of the game. He landed in Pittsburgh where he won a pennant with a talented team, really as nothing more than a push-button manager. He nearly messed up that team, proved his mediocrity in subsequent seasons, and was fired after alienating his players. The White Sox and the Reds gave him a chance in the dugout, but Bush was a crusty manager, one of those “back in my days we played the game right” types. His players never liked him much and he managed his last big league game in 1933. He later managed teenager Ted Williams in the minor leagues, helping the tall, thin hitter with his approach at the plate.

In 1963, 55 years after the first time he played with Ty Cobb, Bush was at the annual MLB Winter Meetings when league officials surprised him with a special award titled “The King of Baseball.” Bush, looking even smaller after the years had wore on him, wiped away a tear as he accepted a plaque for his decades of dedication to the game.

The folks in his home town remembered “little Ownie,” and in 1967, the stadium in which the Indianapolis Indians played was renamed from Victory Field to Bush Stadium in his honor. It remained in use for three more decades.

In 1972, at age 84, Bush was working as a scout for the Chicago White Sox. Still earning a living from baseball. He fell ill during spring training in Florida and died three weeks later after returning home to Indianapolis. The former spark plug of the great Detroit teams of the deadball era was posthumously elected to the Indiana Baseball Hall of Fame in 1979 and is still known as “Mr. Baseball” in Indianapolis.