Looking back at Fight Night at The Joe 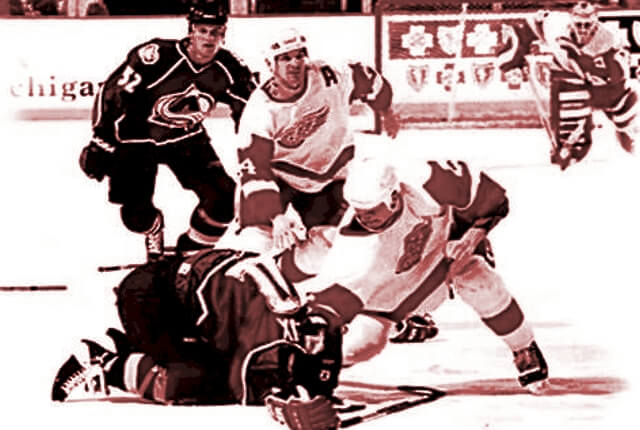 Colorado’s Claude Lemieux crouches on the ice as Detroit’s Darren McCarty pummels him with punches on March 26, 1997 at Joe Louis Arena.

Championship seasons often turn on one key game, and so it was when the Detroit Red Wings finally snapped their 42-year Stanley Cup drought in the spring of 1997. “It becomes clearer with each passing night,” a Denver sportswriter observed during that year’s conference finals between Detroit and Colorado, “that the evening of March 26, 1997 changed the psychological dynamics of hockey’s most heated rivalry.”

The reporter was referring to “Fight Night at The Joe,” an awesome display of primal rage that unified a team in transition and served notice that this particular edition of Scotty Bowman’s team was not going to be shoved around, least of all by the Avalanche. (See video of the game at the bottom of this article)

Over the years, play had been occasionally chippy between the Wings and the Avs, but the rivalry intensified ten-fold during the 1996 Western Conference Finals. The Wings had won a record 62 games during the regular season, making them the favorites to capture the Cup that had long been eluding them. Colorado knocked off Detroit in six games, then went on to sweep the Florida Panthers in the Stanley Cup Finals. But all Detroit could talk about was the play of Avs forward Claude Lemieux, who emerged from the playoffs with an embellished reputation as the dirtiest player in the National Hockey League.

His cheap shots put the entire Wings organization and the whole city of Detroit in the mood for revenge. In Game 3, Lemieux had sucker-punched Slava Kozlov. “You fucking asshole!” Bowman screamed at Lemieux when the teams boarded busses after the game. “I hope the league suspends you!’

After reviewing a tape of the incident, the league did suspend Lemieux for Game 4. The Avs won, anyway, giving them a commanding 3-1 series edge. The Wings bounced back to win Game 5, meaning a victory in Game 6 could knot the series and set up a winner-take-all showdown to see who would get into the Cup Finals.

Instead, Colorado rolled to a decisive 4-1 victory. But the big news was not yet another disappointing end to Detroit’s season. It was Lemieux hitting Kris Draper with a cheap shot that had the jaw of the smiling center sewn up for weeks.

Lemieux’s hit came 14 minutes into the game, after he had already blindsided Steve Yzerman and Igot Larionov as they approached the bench on line changes. This time Draper had just chipped the puck past Joe Sakic, when Lemieux barreled into him from behind. Draper, absolutely defenseless, was driven like a tent peg into the boards and had to be helped, dazed and bleeding, off the ice. Lemieux got a match penalty and ultimately received a suspension, but he protested that it was a clean hit.

Draper underwent three hours of surgery and had his jaw wired shut for 16 days.

“I think anyone who knows anything about hockey realizes that it wasn’t a clean hit,” Draper said when he was finally able to speak. “I had a fractured eye socket. I broke my nose, fractured a cheekbone, and broke my jaw. My teeth also needed to be worked on. All together I had more than 50 stitches.”

After the shock of that brutal hit and their elimination, Detroit’s Dino Ciccarelli said after the series “I can’t believe I shook this guy’s friggin’ hand after the game. That pisses me right off.”

As Draper spent the offseason healing, Bowman went to work overhauling his team. For two consecutive seasons, they had been the winningest team in the NHL, only to fall short in the playoffs. In 1995, they had been swept by New Jersey in the Cup Finals. Then they had lost to Colorado in ’96. It was time to stir the pot, to put more beef in the stew. It was goodbye to Ciccarelli, Keith Primeau, Greg Johnson, and Paul Coffey and hello to veterans Brendan Shanahan, Larry Murphy, and Tomas Sandström and rookies Aaron Ward, Jamie Pushor, and Anders Eriksson.

It took a while for the revamped squad to find itself. By March the Wings were winning, but not nearly as much as before. They were third in the conference standings behind Dallas and Colorado.

Bubbling beneath the surface all season long was the subplot involving Draper and his antagonist, Lemieux. Neither the press nor the fans wanted to let go of the controversy. Players and coaches on both teams admitted they just didn’t like each other. It was bad enough that Lemieux never apologized or personally inquired about his victim’s health. Exacerbating the bad feelings between the teams was his comment that his hit had actually made Draper “famous.”

The schedule maker had Detroit and Colorado butting heads four times during the 1996-97 regular season. Injury kept Lemieux out of the first two tilts, both won by the Avs. Lemieux was healthy for the third game, played in Denver and again won by Colorado.

Ten days later, Colorado—on its way to supplanting Detroit as the President’s Trophy winner—arrived at Joe Louis Arena for the rivals’ last go-around before the playoffs began. This was Lemieux’s first appearance in Detroit since “The Hit” 10 months earlier, and the Motor City was on edge. “The emotions are still there,” Draper admitted. “The juices are going to be flowing.”

Lemieux tried to downplay the significance. “I’m not going to comment about Detroit,” he told reporters. “Show’s over.”

How wrong he was. The show was just starting. In what was instantly branded as one of the classic games in franchise history—and what would emerge in retrospect as the defining moment of the Red Wings’ season—the reigning Stanley Cup champion Avs skated onto The Joe’s ice on the evening of March 26, 1997, smug and remorseless. They left it bloodied and dazed and with a seed of doubt driven into their psyche.

That Wednesday evening contest stands out in local hockey lore as “Fight Night at The Joe.” By game’s end there were 39 penalties called and at least nine bouts, with Detroit combatants—including lightweights Igor Larionov and Mike Vernon—winning nearly every match on the card. The main event was the one-sided thrashing Darren McCarty gave Lemieux, a cathartic beat-down that brought out the blood lust in fans, players, coaches, and more than a few observers in the press box.

The 10-minute battle royal started late in the opening period when the professorial looking Larionov grabbed Peter Forsberg around the neck in a scrum along the boards. Players began to pair off. McCarty—Draper’s good friend and roommate—whirled away from a linesman and, seeing Lemieux standing there unattended, walloped him with a punch to the face.

Lemieux dropped to his knees and tried to cover up. McCarty threw several more punches at the turtling Lemieux before grabbing him by the scruff of the neck and dragging him like a sack of potatoes towards the Detroit bench, where he kneed him and continued to fire punches at the back of his head.

Meanwhile, Patrick Roy moved out of the Colorado net to help Lemieux. Brendan Shanahan, looking to intercept Roy, knocked his man down with a flying leap that resembled something out of the World Wrestling Federation. After Shanahan got in a few swings, he was jumped by the Avs’ Adam Foote, which allowed Roy to take on Wings goalie Mike Vernon, who had waddled at full speed from his crease to join the melee.

Vernon and Roy met at center ice, where the two overstuffed goaltenders flailed away at each other until their arms felt like cement. The much smaller Vernon got the decision, as the Detroit bench and a full house stood on their feet and roared.

Joe Louis Arena was pure bedlam. Larionov had pummeled Forsberg and Vernon had opened a cut over Roy’s right eye. Blood streamed all over Roy’s face. Meanwhile, Lemieux needed 15 stitches to sew up the cut in the back of his head.

Emotions remained high the rest of the night, with Aaron Ward at one point duking it out with a bare-chested Brent Severyn. The pumped-up Wings continued to take the play to the Avs. With Colorado ahead, 5-3, midway through the third period, Martin Lapointe and Shanahan scored a half-minute apart to knot the score. Then in the first few seconds of overtime, Shanahan shoveled the puck to McCarty, who smacked it past Roy for the 6-5 victory. The Joe shook to its foundation.

“What I did wasn’t just for me,” McCarty said afterwards. “It came from everyone on the team.” The jubilant Wings stayed up into the wee hours, drinking beer and replaying a tape of the telecast over and over. A few weeks later, they beat Colorado in a bitterly fought six-game series to move into the Cup Finals against Philadelphia. Draper refused the traditional post-series handshake with Lemieux, who in turn ignored McCarty’s outstretched hand.

Vernon would go on to win the Conn Smythe Trophy as he backstopped the Wings to a sweep over the Flyers. Looking back on the March 26 bloodletting at The Joe, he said: “This was a game that brought the Red Wings together.”