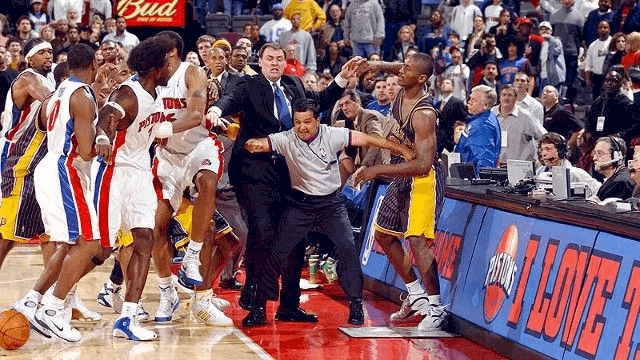 The confrontation between Ben Wallace of the Pistons and Ron Artest of the Pacers is about to get ugly.

We will remember the four trips to the NBA finals, and the three championships.

There were also the nine appearances in the Eastern Conference Finals.

The Bad Boys will forever be in our collective memories.

The Goin’ to Work Era was an attitude we all shared.

On April 10, the Palace of Auburn Hills will finally host its last home game for the Detroit Pistons.

No sendoff for that grand building will be complete, however, without a look back at what remains one of the ugliest moments in professional sports.

The Malice at the Palace, as it quickly came to be known, was a black mark on both a league, and (unfairly) an entire region.

The Pistons were fresh off a season in which they had reached the NBA Finals, defeating the heavily favored Los Angeles Lakers to win the championship. To get there, however, the Pistons were forced to duke it out with the Indiana Pacers in six hard-fought games in the Easter Conference Finals.

Most everyone felt that the Pacers and the Pistons were likely to meet again in the postseason. Early season NBA games do not usually generate much excitement. This particular November matchup, however, which was being televised nationally on ESPN, had a certain buzz to it before the players even hit the hardwood.

A statement game, some were calling it.

Indiana carried a 6-2 record into the Palace, while the Pistons had won four of their seven games.

The game was not very entertaining. The Pacers bolted to an early 20-point lead and cruised the rest of the way. With less than fifty seconds to play, the score was 97-82.

Ron Artest fouled the Pistons’ Ben Wallace during a layup attempt. At the point of contact, Wallace later claimed, Artest slapped him on the back of the head. Wallace, who did not take kindly to this, whirled on Artest and shoved him, hard.

As the two looked ready to lock horns, players from both sides tried to keep them separated. At the beginning, it was not much of a melee, just the perfunctory pushing and shoving, with a peacemaker here and there, a lot of bluster, and, for the Pistons, mostly just a release of pent-up frustration at the end of a blowout. The courtside fans, meanwhile, had begun hurling invective at Pacers players. 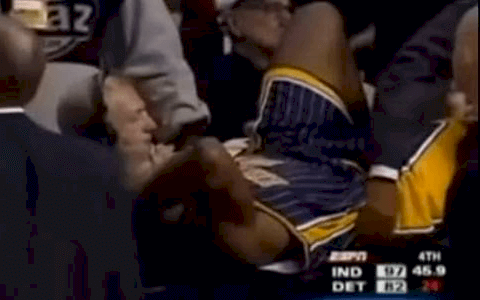 Ron Artest lies on the scorer’s table after committing a hard foul on Ben Wallace on November 19, 2004 at The Palace of Auburn Hills.

Artest, having decided to take a breather, laid himself down on his back on the scorer’s table, of all places. By that time, most of the players were just milling around trying to look tough, while the referees started to sort things out. Wallace, in particular, looked ready to rumble, but was being restrained by his mates. Cooler heads, it seemed, would prevail and the game would be wrapped up soon.

However, it did not take long for all hell to break loose, as they say.

A fan tossed a plastic cup at the prostrate Artest, hitting him in the chest. Pacers coaches tried to hold Artest back, but to no avail. He leaped up off the table and charged into the stands.

What had looked to be just a little brouhaha between players quickly escalated into a horrendous free-for-all.

Additional players swarmed the stands, punches were thrown, and fans tossed more debris. People watching it on TV at home or at the bar could not believe it. It looked like a small-scale riot. The Pacers’ Jermaine O’Neal put it this way: “As bad as it looked on TV, it was at least 20 times worse in person.” 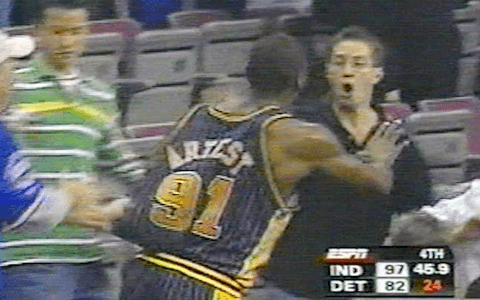 Indiana’s Ron Artest goes into the stands to assault fans in Detroit.

Watching the video now, it is no less jarring than it was over a decade ago. It is an assault on our perceptions of law and order, of vigilante justice.

The Malice at the Palace is remembered because, unlike every other sports brawl before it, this one had the fans pitted against the players, and vice versa. An unwritten understanding had been breached. In the past, players were not to retaliate. They were not to take things into their own hands, no matter what. They were never, EVER to enter the stands to confront a fan. That was the job of arena security.

That’s how it had always been, right?

But that one night at the Palace, the established order of things was turned upside down.

Pistons’ coach Larry Brown could not believe it. “I just felt sick to my stomach to see what transpired.”

The rest of the game was called off, but the tumult was not over. As Pacers players made their way towards the tunnel, they had to run the gauntlet as fans tossed food and drinks on their heads (Some goon hurled a broom, another a metal folding chair.).

NBA Commissioner David Stern threw the hammer down, suspending nine players for a total of 146 games (not to mention nearly $11 million in lost salary). Among the Pistons suspended were Wallace, Chauncey Billups, Derrick Coleman, and Elden Campbell. 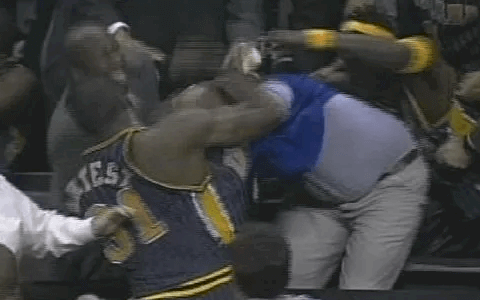 Ron Artest and teammate Jermaine O’Neal grapple with a fan at The Palace of Auburn Hills in what became known as “The Malice at The Palace.”

It was Artest, however, who bore the brunt of the punishment. He was suspended for the remainder of the season (including the playoffs), losing almost $5 million in pay.

Because of the Malice at the Palace, the NBA instituted new security guidelines for all teams. It also banned the sale of alcohol after the third quarter.

Over time, Artest (who later changed his name to Metta World Peace) regretted his reckless actions that night. So did nearly all the players involved. Said Ben Wallace, “It was an unfortunate event that hopefully everybody has learned from.”

Here’s video of the event: