Many fans have never seen the Red Wings miss the playoffs 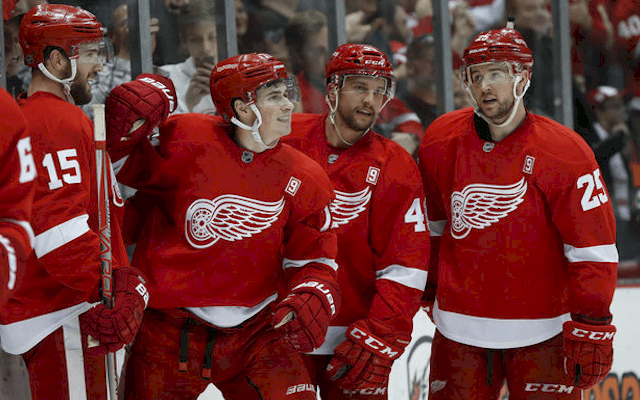 Despite solid performances from some young players, the 2016-17 Red Wings have been too inconsistent and too soft on defense to make a serious run at the Stanley Cup Playoffs.

As each day passes, the Detroit Red Wings inch closer and closer to missing the playoffs for the first time in more than a quarter of a century.

The 26-year playoff streak is the longest in any major professional sport.

For Red Wings fans like myself (in my 30s), it is difficult to remember Detroit not being in the playoffs. For me, I was 8 years old the last time the Red Wings missed out on the excitement of the Stanley Cup playoffs.

It was a rough season in Hockeytown. The Red Wings were an average offensive team, scoring 288 goals, which put them 12th in the NHL in scoring. But the Red Wings allowed 323 goals, which was 17th out of 21 teams that season. It is tough to win in that atmosphere.

Meanwhile, the Red Wings had just traded up-and-comer Adam Oates to the St. Louis Blues for veteran Bernie Federko. Both players were headed for the Hall of Fame, but Federko played just one season in Detroit before retiring and that season he had just 57 points (17 goals and 40 assists) when he was brought in to be a major offensive threat.

The Captain, Steve Yzerman had one of his better seasons with 62 goals and 65 assists for a stunning 127 points. But only one other player (Gerard Gallant, 80 points) had more than Federko’s 57.

But as much of a struggle as it was for the Red Wings offensively, it was a horrible season defensively. The goaltenders struggled, but they didn’t have a great defense ahead of them.

Of the 12 defensemen on the roster, only Steve Chiasson and Yves Racine had successful seasons in their futures.

Detroit was still two years away from seeing rookie defenseman Nicklas Lidstrom and Vladimir Konstantinov provide the Red Wings with a stellar back line that included Chiasson and Racine. And with that defense ahead of him, Cheveldae had a much better season with a 3.20 goals against average and a 38-23-9 record.

Offensively, in those two years, the Red Wings added Sergei Federov and Ray Sheppard,, who provided Yzerman with some much-needed scoring support.

But in 1989-90, all eyes in Detroit were on the Pistons, who were on their way to the NBA championship. The Red Wings, who had been coming off three consecutive playoff seasons, their longest streak since four straight from 1962-66, looked to be heading in the wrong direction.

I don’t remember too much about that season, but I remember that feeling of them heading in the wrong direction.

I have a similar feeling this season, especially with the death of owner Mike Ilitch. Hopefully, it can be a quick turnaround and the start of another long playoff streak once again.