His grandfather didn’t make the Tigers, but Mark Wagner did 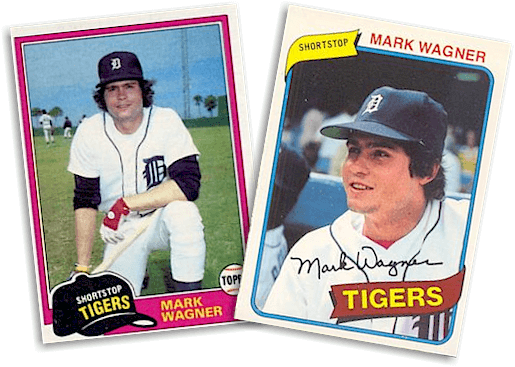 It’s been said that 90 percent of life is simply showing up. Too bad Joe Scott didn’t heed that advice. In 1925, the Ohio sandlotter was invited to try out with the Detroit Tigers by none other than Ty Cobb himself. The Tigers’ player-manager was miffed, however, when Scott reported late to spring training. Scott never got his chance to show what he could do.

A half-century later, Scott’s grandson, Mark Wagner, got his call while getting ready to play a game for Evansville. Detroit’s regular shortstop, Tom Veryzer, had suffered a strained ligament, and Wagner was needed pronto.

Wagner didn’t blow his chance. On August 19, 1976, he suited up for a doubleheader against Minnesota at Tiger Stadium. He got a hit his first time up, added a second base hit later in the game, and accounted for an RBI in Detroit’s 3-2 win. He played the second game of the twin bill without having an at-bat, but then hit safely in his next six games.

A seven-game hit streak to start his major-league career was almost unimaginable to the slender, soft-spoken Wagner, who grew up a Tigers fan in Ashtabula, Ohio. In fact, he had made his first trip to Tiger Stadium as an 8-year-old in 1962, accompanied by his father, uncle, and grandfather. “It was a dream come true,” Wagner said of his debut. “And it just happened to be at Tiger Stadium.”

Wagner was bound to cool off, and he did, finishing the season with a .281 average in 39 games. However, the Tigers’ 19th pick in the 1972 amateur draft figured in the team’s plans—plans that were upended by a succession of injuries and the emergence of another shortstop in the Tigers’ farm system, a fellow named Alan Trammell.

Wagner wound up being Tram’s backup through 1980 before being traded to Texas for colorful reliever Kevin Saucier. After three seasons with Texas, he signed with Oakland as a free agent for the 1984 season. Overall, Wagner batted .243 in 414 big-league games. Ordinary numbers, but nine years in the majors was far beyond what his grandfather, Joe Scott, ever dared dream.

Wagner even got to pitch against his favorite team, making a token relief appearance for Oakland on August 20, 1984 during a 14-1 blowout loss at Tiger Stadium. He faced seven batters, gave up a couple hits but no runs, and struck out one (the embarrassed Johnny Grubb). The following year he played a handful of games for Buffalo in the American Association, then quit.

After his playing days, Wagner worked as a homebuilder and coached in the Detroit and Cincinnati organizations. In 2009 he visited what was left of Tiger Stadium before the old park was completely torn down. “It was something, getting a chance to play with some of my heroes like Willie Horton and Bill Freehan,” he told his hometown paper at the time. “And it was fun playing behind Mark Fidrych.”

And just to remind him of how far he had traveled, Wagner keeps the framed letter Cobb once wrote to his grandfather, inviting him to camp, on a wall of his home.