This Lions’ owner is not the same old Ford 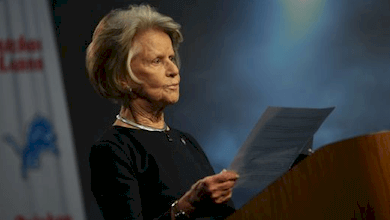 Martha Ford has shown that she is willing to have an active role as owner of the Detroit Lions.

That’s right. A Detroit Lions owner had a press conference.

Granted, it wasn’t very long. I’ve had showers that have lasted longer than that.

In fact, that’s kind of what it seemed like: A nice, brisk shower. Martha Ford walked in, she stated her point, and then she left. Thank you all for attending. In the process, she washed herself and her organization of a lot of the grime that had taken the sheen off of her team’s silver helmets.

I don’t know anything about Martha Ford. I’d venture to guess that nobody outside of her immediate family knows much about Martha Ford. But I think Lion fans have learned a lot about her in the past several hours. I think they like her a lot better than they did yesterday.

I’m intrigued by what went on today at Allen Park. Not as a football story, although it is certainly that.

But here’s what I gleaned about Martha Ford today. And maybe I’m completely off base with this. But it is a first impression, and sometimes those are the most accurate.

Martha Ford stood by her late husband as football fans in this city called for him to sell the team that he loved. For years she heard that.

She endured the abuse that was hurled at him (much of it warranted). The abuse must have hurt him, which meant it probably hurt her. What Martha Ford said to her late husband all those long, long years is unknown. Maybe she called him out for being too loyal to front-office employees who weren’t deserving of it. Maybe her husband told her to mind her own business.

Or maybe Martha Ford never said anything. Maybe she felt it was better to wait. Maybe she held her peace, knowing that her late husband was loyal to a fault.

I think what we saw today was a 90-year-old widow who doesn’t want to sell the team. Not yet anyway. She has some unfinished business. She wants to turn this team into a winner for this town, and for her late husband. Can anybody say that she has any other motive? Why in the world would a woman her age want to take over the reins of a perennially-bumbling football franchise if she didn’t have some personal interest in it that only she can fathom? She frankly doesn’t need the aggravation, unless she is a driven, determined woman who wants to repair her husband’s football legacy, one that he spent the past fifty years trying his best to diminish.

It is only one day. It was only one press conference. And who knows, maybe Martha Ford will ultimately prove to be as incompetent as her late husband was at finding a savvy football person who can turn the Detroit Lions into a consistent winner.

But whatever happens from here on out, Martha Ford did her best Michael Corleone impression today. The image of her stalking the halls of the Lions headquarters, throwing open office doors and handing down “stay” or “go” verdicts, is one of a cutthroat businesswoman. I think Martha Ford made a conscious decision to do what she’d wanted her late husband to do for the past half-century: To lay down the law, and to demand accountability. Martha Ford understands far better than her late husband ever did that general manager jobs in the NFL were never meant to be lifetime sinecures.

Nobody knows what kind of an owner Martha Ford is going to be. But today, we saw something that we haven’t seen a Detroit Lions owner do in decades.