Why Matthew Stafford is underpaid 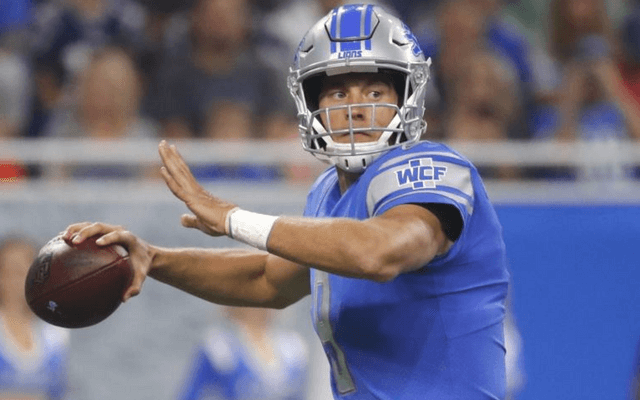 Those who cannot remember the past are condemned to repeat it. — George Santayana

Last month the Lions made quarterback Matthew Stafford the highest-paid player in the National Football League. That hasn’t made all Detroit fans happy. In fact, judging by the popular outcry, I’d say the majority of Lions fans think Stafford is undeserving.

Not only is Stafford not overpaid, he’s underpaid.

Beep! Beep! Beep! Back up the Brinx truck and give Stafford as much gold and silver as he needs. The Detroit QB is worth every penny and much more.

Look, if you’re one of those fans who thinks Stafford is overrated, over-hyped, and overpaid, please read on. Let’s try a history lesson.

One Pro Bowl quarterback since 1971

In 1971 the Lions had a quarterback named Greg Landry, a handsome fella who played college ball for Massachusetts. He was 25 years old and threw for 2,237 yards while completing 52 percent of his passes. He tossed 16 touchdowns and 13 interceptions. Back then, those numbers were decent enough to draw some praise because eight of every ten snaps resulted in a run play. Landry was named to the Pro Bowl team for that performance. He’s the last Lion QB to earn that distinction until Stafford in 2014.

In the intervening years, from 1972 to 2011 (Stafford’s first full season as Detroit’s signal caller), the Lions have employed 32 quarterbacks in four decades. I won’t make you miserable by naming them all, but there were names like Joe Reed, Jeff Komlo, Todd Hons, Rusty Hilger, Bob Gagliano, Don Majkowski, and someone named Stoney Case. The immortal Mr. Case was so bad that in one game while he was with the Chiefs he threw for only 103 yards but had an interception returned 108 yards. Yes, that’s right – 103 yards forward and 108 backward.

During that long nightmarish stretch that the Lions tried to secure a solid quarterback, they reportedly found “the one” several times. In 1986 the team drafted Iowa quarterback Chuck Long in the first round. Long had a rocket arm and set all sorts of records in the NCAA. He fired a TD on his first pass in the NFL, but he never figured out how to read defenses. His “best” season was when he threw 11 TDs and 20 interceptions.

Four years later the Lions tried again, choosing Andre Ware with the seventh pick in the 1990 NFL Draft. Head coach Wayne Fontes loved the multi-faceted game of the Heisman Trophy winner. Ware could run, throw, and throw on the run. Fontes insisted that the Lions pick Ware in the first round, overruling the scouting department. The head of the Detroit scouting department was so incensed that he quit the following day. That scout was right – Ware was a bust, throwing only five TDs in his abbreviated career. Even Fontes saw he’d made a mistake and gave starts to Rodney Peete instead of Ware.

The Lions went to the free agent wire to get their next “marquee” quarterback. In 1994 the signed lefthander Scott Mitchell after he’d spent three years as an apprentice under Dan Marino in Miami. But none of Marino’s magic had rubbed off on Mitchell. In three full years over center, Mitchell racked up some gaudy passing numbers while firing the pigskin to talented receivers Herman Moore, Bret Perriman, and Johnnie Morton. He helped the team to the playoffs twice, but he was never accepted by the Lion faithful, who hated his immobility, his jittery nerves, and the wobbly throws that too often came from his hands. Mitchell’s teammates didn’t even respect him, as lineman Lomas Brown later admitted to purposely missing a block so Mitchell would get injured. The Lions lost both playoff games Mitchell started.

The highest draft pick the Lions have ever used for a quarterback was the #3 selection in the 2002 NFL Draft when they nabbed Joey Harrington. Apparently the team had fallen in love with Harrington after he had a huge game in the 2002 Fiesta Bowl, his last collegiate game for Oregon. But Harrington came to signify the terrible Lions of the early 2000s, and as he continued to disappoint and the Lions kept losing, fans came to loathe him. He earned the nickname “Joey Sunshine” for his overly optimistic “we’ll get ’em next time” attitude after the many Detroit defeats.

Harrington went 18-37 for the Lions, tossing more interceptions (62) than touchdowns in his four years as “franchise quarterback” in Detroit.

Is that enough Detroit quarterback history for you? Or do you want more punishment?

How about the ten straight losing seasons from 2001 to 2010 when the team tried ten QBs until finally handing the job to young Matthew Stafford? During that stretch the team lost 19 straight games and went 0-16 to set a futility mark. They lost so much that they became a national joke. And all the while they kept flailing in an attempt to find a good quarterback.

The Lions had Don Orlovsky start seven games (he went 0-7). They rolled out Drew Stanton four times and he responded by tossing nine interceptions. Things became so desperate that they started Shaun Hill, a guy who had been recruited as a punter out of high school and only played QB for two seasons in college. Hill barely knew his way around a huddle, let alone as an NFL quarterback.

That’s where we came from, folks. The Lions QB situation over the last 40-plus years has been a fiasco wrapped in a joke inside a disaster.

Stafford is the most important QB in the NFL

But since Stafford has taken hold of the job the team fortunes have changed. In his six seasons as the starting QB, Stafford has led the Lions to the playoffs three times. He’s done that with essentially the same bumbling nincompoops in the front office that the Lions have had since the 1970s. He’s done that with a mediocre (at best) team around him. For every Calvin Johnson he’s had on his side, Stafford has had to overcome a subpar offensive lineman who wouldn’t start for many other NFL teams. He’s had to outscore teams because his defense has ranked in the bottom third of the league (as it has in each of the three seasons he’s guided the team to the postseason).

Entering 2017 Stafford is clearly a top tier QB in the league. He’s the most important quarterback in the league because he means more to his team than any other passer. If Tom Brady goes down, the Patriots will still win 10+ games. The Packers have an elite defense and great players to support Aaron Rodgers. The Lions have the worst backup QBs in the league (according to a pre-season report), and if Stafford gets hurt, God help the Lions.

In the last few seasons, as the Lions have improved as a team, Stafford has proven that as long as he is in the lineup and is given a chance, especially late in games, the Lions have a chance to get a win.

Stafford has broken and established every passing record in franchise history and set NFL records for come-from-behind fourth quarter victories. He’s used his powerful arm, leadership instincts, and guts to will the Lions to wins they had no reason to win. He’s kept them in games they should have blown out of. He’s created excitement.

Despite his success in a tough situation, he’s still castigated by shortsighted fans who pout because Stafford has failed to single-handedly win a Super Bowl. Those fans clearly ignore history. Which QB do you think would do a better job in Detroit? Name him.

Signing Matthew Stafford to the biggest contract in NFL history won’t guarantee a Super Bowl title. Hell, it won’t guarantee a playoff win. But not signing Stafford would have sent this franchise into another tailspin of losing for years and years.

Andre Ware, Scott Mitchell, Gus Frerote, and Stoney Case. Drew Stanton for criminy sakes. The Lions have run a string of clowns onto the field over the years and none of it has worked.

Matthew Stafford is a godsend.

For all that, Stafford is underpaid.

One reply on “Why Matthew Stafford is underpaid“