Media Guides are Still Hanging on in Baseball Press Boxes 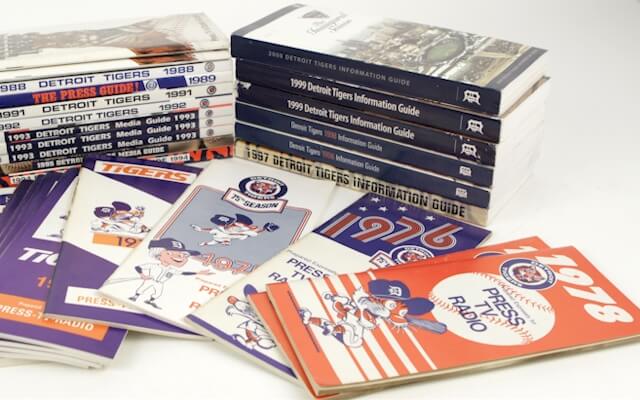 You have probably heard the expression, “You are what you read.”

For the past couple weeks, I have been reading the 2017 Detroit Tigers Media Guide.

I am not sure what that makes me. The word “geek” came to mind, but I immediately rejected that notion.

Of course, one does not “read” a media guide in the narrow definition of the verb. It is a reference tool; a compendium of facts, numbers, and obscure allusions that makes for ideal press box (not to mention bathroom) reading.

Most folks have likely never heard of a media guide. The tomes have pretty much gone the way of the dinosaur, and their future is very much in doubt.

Baseball teams have been publishing them annually for decades. They used to be called simply “press guides,” back in the days when newspapers were the only outlet reporting on baseball. In the 1960’s and ‘70’s, the name changed to “press/radio/TV guide.” It is all the same soup.

Team public relations departments are the great compilers of media guides. The books contain profiles of all the players and front office personnel (even at the minor league level), along with sections on team history, records, facts, and figures. It is everything that beat reporters, radio voices, or TV commentators need to know in their daily work. 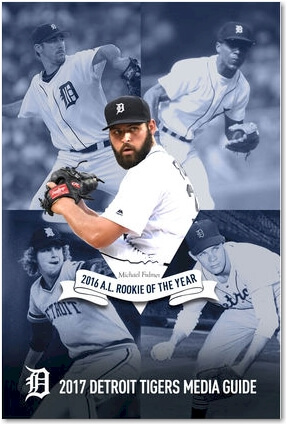 The 2017 Detroit Tigers Media Guide features the five players who have won the Rookie of the Year Award with the team, including the most recent, pitcher Micheal Fulmer (2016 winner).

Today, of course, the media can access pretty much everything it wants online. The internet, coupled with the individual game notes the media receive from the team each afternoon, makes the guides less essential. It would be interesting to know what percentage of the Tigers media actually takes advantage of the guides. Does Rod Allen crack one open on a sleepless night to glean some tidbit about Mikie Mahtook?

The history of press guides dates all the way back to the 1930’s. At that time (and for decades afterward), they were only available to the ink-stained wretches. If a fan wanted to get his hands on one, he had to know somebody in the organization who could get him a clandestine copy. Either that or sneak his way into the press box and swipe one off of Iffy the Dopester’s desk when he was dozing.

Baseball memorabilia types have always loved collecting media guides, primarily because they were hard to get, had a limited print run, and contained a wealth of information you simply could not find elsewhere.

In our 21st Century, the distribution dynamic is decidedly different. The modern version of the Tigers media guide is targeted mostly toward the fans in the stands (its pages even feature ads for Little Caesars and 97.1 The Ticket). The Tigers sell their media guides on their website and at the Comerica Park team store. Investing in one will set you back a Jackson, but they are worth every penny, in my opinion.

Our grandfathers’ press guides were simple, lightweight affairs easily tucked into a breast pocket behind a pack of Luckies. The 1961 Tigers guide, for example, was a mere 39 pages. In 1968 it was 44, and 74 in 1982. The 2017 Tigers media guide, on the other hand, checks in at a whopping 558 pages. The profile on Miguel Cabrera alone takes up 17 pages.

Here are just a few pearls of insight I unearthed from this year’s Tigers media guide:

— Aurelio Rodriguez holds the club mark for most games played at third base (1,236).

— Former manager Jim Leyland won the Dapper Dan Man of the Year Award in 1990 (back when he was skippering the Pirates).

— The team record for career one-hitters is three, shared by Denny McLain and Jack Morris.

You get the idea.

Unfortunately, we may not be seeing media guides much longer, at least the print versions. For years now, teams have been choosing to switch to all-digital media guides. The costs are far less, they are more eco-friendly, and e-guides have the added advantage of being able to update more easily.

If the Tigers ever go digital-only with their media guides, I may shed a tear, but I will save a lot of space on my bookshelf.