Megatron getting a different reaction than Barry did when he retired 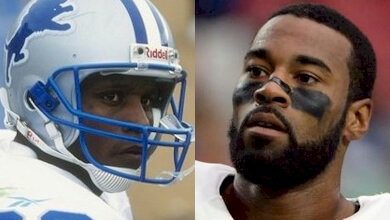 Barry Sanders and Calvin Johnson are the two best players the Detroit Lions have had in the last 50 years.

On Wednesday, it was reported that Calvin Johnson had told teammates and some members of the Detroit Lions front office that he was pondering retirement rather then returning for a tenth season in the National Football League.

In Detroit this immediately brought back some bad memories.

Seventeen years ago, Barry Sanders shocked the Lions when he retired after his tenth NFL season.

Like Johnson is right now, Sanders was 30 years old when he walked away from football.

Like Johnson, Barry was already an all-time great when he decided to retire.

Like Johnson, Barry was closing in on an NFL record but decided his heart was no longer in the game.

Please forgive Detroit fans if they don’t embrace this case of Déjà Vu.

To be clear: Johnson has not confirmed yet whether he will retire. But solid reports have him telling his mother and close teammates that he “wasn’t sure if he wanted to play anymore.”

On the surface the similarities between the possibility of Johnson retiring and the actual retirement of Sanders seem to be fairly striking. But even if Megatron does fade off into gridiron retirement, the way this is unfolding is much different than when Sanders departed back in 1999. Already, Lions fans are showing a much different reaction than they exhibited when Barry bolted the Lions only one year removed from having rushed for more than 2,000 yards.

A sampling of more than two hundred comments on the Detroit Athletic Co.’s Facebook page on Wednesday night reveal overhwelming support for Johnson.

Comments from fans include: “If he does indeed retire I say good for him and enjoy the rest of your life.”

And “It would be sad, but understandable. If the body can’t take it, or the heart is gone, time to go.”

In contrast, when Sanders retired after rushing for 1,491 yards in 1998, fans were angered. Many called him a quitter and a traitor. Fans who wore his jersey and cheered for him, turned on him. Why? Because they felt Sanders had turned his back on them. When Barry took off his shoulder pads and retired, he robbed Lions fans out of seeing him break the all-time rushing record. Instead, after Sanders retirement, Detroit rooters watched as the franchise went 50-126 over the next eleven seasons, punctuated by an 0-16 season in 2008.

Barry meant so much to this city, beyond simply football. He was a face in the community and he was something Detroiters felt proud of. The team won only one playoff game in the 1990s and they had their share of disappointments, but at least they had #20, the most exciting running back the game had ever seen. Then poof! just as quickly as Barry could make a linebacker miss, he was gone. Lions fans felt cheated.

In addition, Sanders announced his departure in a bizarre manner, via a fax sent to his hometown newspaper in Wichita, Kansas. It came on the eve of training camp and it left the team high and dry. Fans were outraged.

But Johnson’s possible departure comes in a different way and from within a much different environment. He’s promised to make a decision soon. This doesn’t seem like a run out of town by the five-time Pro Bowl wide receiver known for his amazing athleticism and sure hands. In addition, a film in theaters right now, Concussion, illustrates clearly the dangers that football players face when they play this violent sport. Fans can relate to the choice of 1) more money when you’re already set for life OR 2) retirement and a healthy brain and body. Excuse the clumsy pun, but it’s a no-brainer. The dismal record of the Lions in the Megatron Era (no fault of Johnson’s) is another reason most Lions fans are not unsympathetic about his possible decision to step away. A man can only take so much disappointment. In fact, sometimes it feels as if some Lions fans wish they could “retire” from this team.

Johnson has accumulated 11,619 yards in his career, a figure that ranks him 27th all-time. He’d never catch the all-time leader in that category, Jerry Rice is just way too far ahead of everyone else, but given four more years of modest production he could be the #2 all-time receiver in the history of the league. If he retires Lions fans won’t see that. Johnson benefits from Sanders having already walked away from something like that (Barry was only about 1,500 yards away from eclipsing Walter Payton’s mark), so I think that helps lessen the criticism.

Ultimately, whether Johnson retires or not, he’s done enough through the age of 30 to earn induction into the Pro Football Hall of Fame. When Megatron steps on stage someday to receive that honor there will be very few if any bitter Lions fans watching, No, Detroit fans understand why Calvin may want to hang up his shoulder pads, they don’t want it to happen, but they understand.